Got 80,000 Velocity Points? Here are some ideas on what to do with them

Make the most of your next Velocity sign-up bonus

As the latest addition to our series on the best uses of points, in this guide, I outline eight ways for using your 80,000 Velocity Points balance for maximum value.

One key thing to note is that the best-value redemptions are to be had by redeeming for Premium Economy, Business or First Class flights. To understand why, consider joining the Point Hacks ‘earning more points’ email course.

1. Transcontinental in a lie-flat Business Class suite for 71,000 points return

Virgin Australia and Qantas run Airbus A330 aircraft on busy domestic routes between Perth and cities on the East Coast, namely Sydney, Melbourne and, on occasion, Brisbane.

These planes have flat-bed seats and direct-aisle access in a 1-2-1 configuration, which is a real luxury for domestic routes that usually range from 3 to 5½ hours each way, depending on the route.

However, the relatively shorter length of these routes makes it a great value Velocity redemption, with only 35,500 points needed each way, covering up to 2,400 miles of travel.

Given that Perth to Melbourne is only 1,670 miles and Perth to Sydney is 2,037 miles, you can still add short connecting flights to your main transcontinental flight without affecting the overall price, as long as the total distance remains under 2,400 miles.

For example, you can also fly Perth to Melbourne to Mildura for the same 35,500 points one-way, and enjoy both the A330 transcontinental Business Class, plus the connecting regional flight in Boeing 737 Business Class.

Taxes on a Melbourne to Perth return redemption flight are ~$52, including a new $5.50-per-sector carrier charge for each domestic Business Class flight that will be introduced from 2019. 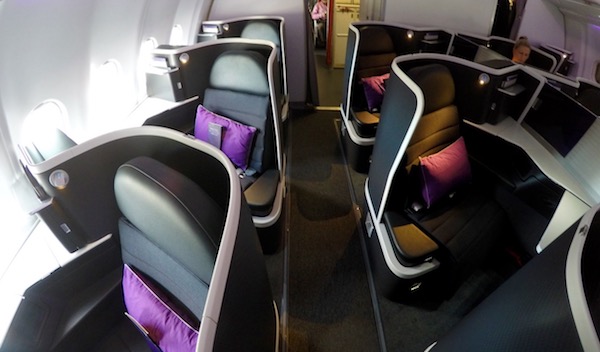 If you want to sample Singapore Airlines’ fancy Suites Class, even on a short four-hour flight, then you are in luck.

For just 56,000 Velocity Points from Singapore to Hong Kong, you could start your journey in The Private Room, which features a proper restaurant dining experience.

If you land the updated Airbus A380, then this spacious suite would be yours for the next four hours.

In KrisFlyer miles, just 37,500 miles are needed for Saver redemption rates, which converts from 58,125 Velocity Points under the updated rates. Taxes are approximately $49 one-way.

Interested in flying this product? You can also redeem your points directly through Velocity for travel in First and Suites Class on Singapore Airlines.

Etihad’s First Apartment is one of the most luxurious First Class products in the world, with a comfy bed, chef-prepared food, fine champagne and an onboard shower.

It is only found on select routes serviced by the Airbus A380 from the airline’s Abu Dhabi hub.

The lowest-cost redemption is the seven-hour flight from Abu Dhabi to London or Paris for 78,000 Velocity Points.

Do note that Etihad First Class redemptions using Velocity Points attract a US$300 fee per segment (on top of taxes). 4. Virgin Australia A330 Business Class between the East Coast and Hong Kong for 59,500 points one-way

Compared to Qantas and Cathay Pacific, in my opinion, it is arguably the most well-rounded Business Class service to Hong Kong, with excellent onboard service and dining.

Taxes on a one-way Business Class flight from Melbourne to Hong Kong are ~$135, including a new $50 carrier charge being introduced in 2019. 5. Upgrade up to sixteen domestic flights from Economy to Business Class

Domestic Business Class upgrades are relatively easy to come by, especially if you have Gold or Platinum status.

On short flights under 600 miles, e.g. Sydney to Melbourne, you can upgrade to Business Class from even the cheapest Getaway fare for 10,000 Velocity Points—giving you precisely eight upgrades from your 80,000-point haul.

From a Freedom fare, that drops to 4,900 points per upgrade, giving you potentially 16 chances to move up to the pointy end.

On longer trans-continental flights (e.g. Perth to Sydney), upgrades start from 30,000 points from Getaway or Elevate fares, but drop steeply down to 9,900 points if you can splurge on a Freedom fare. At the latter rates, that is another eight upgrades for the A330 Business Class experience.

We generally do not advocate using your Velocity Points for Economy travel, if fares are much cheaper with cash. However, there can be some instances where fares are high and Velocity reward seats are still available, generally on short regional routes. This would represent excellent value.

For example, Canberra can be a fairly pricey destination to travel to during the working week. Here is an example mid-week fare from Melbourne:

and here is the accompanying reward seat availability:

Your 80,000 Velocity Points can get you up to five redemptions in Business Class on these short flights. At 15,500 points each for a ticket that retails for $449, you are looking at a redemption value of 2.90c per point, which is not bad.

But 80,000 points could also get eight Economy Reward flights. If a ticket was $259 or 7,800 points, you should definitely consider using your points, with a high value of 3.32 cents per point in this instance.

Singapore Airlines is one of the major partners of Virgin Australia. You can redeem Velocity Points directly on the Virgin Australia website, or transfer them directly to KrisFlyer for improved award availability.

Perth – Singapore starts at 53,000 points in Business Class, which gives you up to 3,600 miles to travel. Since the distance between the two cities is only 2,432 miles, that means you can add on a shorter connecting flight at no extra cost—such as to Bangkok.

Flights from the eastern states start from 65,000 Velocity Points in Business Class, and you will be able to experience some of the latest seats on selected flights out of Melbourne, Sydney, Brisbane and Adelaide.

If the availability of reward flights through Velocity is an issue, you can convert your points to KrisFlyer miles instead.

Given redemptions to Asia cost 58,000 miles from the eastern states, you will need to transfer extra points to KrisFlyer to be able to redeem a reward flight directly with Singapore Airlines. Virgin Atlantic in London is one of two major partner airlines that benefit from being in the same points table as Virgin Australia itself, which means lower rates overall (the other partner is Delta in the US).

Just 49,500 Velocity Points will net you a Virgin Atlantic Upper (Business) Class seat between London and New York or Boston. The taxes component is also drastically less with Velocity, as detailed in this guide.

Your journey starts off at the fabulous Virgin Atlantic Clubhouse lounges.

You will enjoy the seven-hour flight across the pond in a lie-flat seat and with an in-flight bar as well.

Velocity Frequent Flyer offers numerous ways to redeem your points both close to home and far abroad, with a decent mix of partner airlines.

From Economy all the way to First Class Suites, 80,000 Velocity Points will certainly come in handy and get you a lot of ‘travel for your buck’, compared to buying toasters, for example.

Looking for more inspiration for how to spend your hard-earned frequent flyer points?

Here is a comprehensive list of all of our Best Uses of Points guides. There may be some overlap but each guide has its own twist.

Could the increased surcharges for Velocity redemptions be good for members?