While lacking the shine of its east coast counterparts, this lounge still gets the basics right.

The Qantas Club lounge at Sydney Airport is a stalwart for the airline. Being one of the carrier’s busiest domestic lounges, it serves passengers taking the quickest regional hops to the longer transcontinental routes – and everything in between.

So how does the lounge stack up in 2022, now that domestic travel is booming once again? Read on to find out as we put it to the test.

You’ll find Sydney’s domestic Qantas Club lounge after security in Terminal 3. If proceeding through the main checkpoint, make a left along the concourse, and keep your eyes peeled for a red ‘Qantas Club’ sign. Keep wandering until you spot the red Qantas Club sign, then head inside and upstairs. If you see a black ‘Business Lounge’ sign, you haven’t walked far enough. If you do take the wrong entrance though, you can still wander along to the Qantas Club via the upper level.

However you get up here, the Qantas Club is sizeable, occupying roughly half of the terminal’s upper level. This sees plenty of natural light flowing into the space, with windows from one end of the lounge to the other.

Eligible Jetstar passengers can also access the space, but it’s not particularly practical. That’s because Jetstar flies from Terminal 2 in Sydney, which means clearing security once to access the Qantas Club, and again for the flight itself. Given the queues at Sydney Airport lately, allow plenty of time – or head to the Rex Lounge via Priority Pass instead.

Travellers are spoiled for seating choices at Sydney Airport’s Qantas Club lounge. As you’d expect, seats closest to the entrance tend to be busier. That’s why I always head to the far left or far right of the lounge, where there’s more room to move.

On a morning visit, turning right after reception reveals a sea of seats basking in that morning glow. You don’t need to sit directly in its path, either – pulling up a perch a few rows back works just fine for me.

This far end of the lounge is also home to a TV corner and a second buffet – which I’ve never seen in use. As you meander back towards the entrance, more seating options pass you by. Benches pop up throughout, perfect for any laptop work, and there’s no shortage of cosy chairs. The back corner of the Qantas Club is often nice and quiet. There’s also a TV suite down here when your visit allows time to relax. In all the years I’ve been visiting this lounge, I’ve never once seen this buffet used for anything. With seats of all kinds, take your pick. These benches are great for laptop work, but would be better with power points. You certainly can’t complain about the views from this lounge. Flying solo? These single seats are for you. But there’s nothing stopping you from settling in by the window, either. The look and feel of the lounge changes as you explore its various sections. There are certainly worse places to work on a laptop. These seats are conveniently close to the bar, and are often quiet. These long benches are an old favourite when there’s work to do on a longer stay. Dining tables fill the centre of the lounge.

Continuing to wander reveals more individualised working stations, where the iMacs used to be. This leads around to the back of the lounge, where benches line the windows: complete with handy power points.

Looping around the back, there are even more comfy chairs for solos, pairs and groups. In the next space, long benches sit opposite the bar with warm lighting overhead – another great workspace. And finally, we’re back near reception, where there’s a collection of dining tables conveniently adjacent to the buffet.

Food and beverage in the Sydney Qantas Club

Sydney’s Qantas Club serves up a variety of food tailored to the time of day. Being Qantas’ lead-in lounge brand, set your expectations below what you’d find in the Qantas Domestic Business Lounge next door. But you certainly won’t go hungry.

This mid-morning visit finds fresh fruits at the ready. They’re joined by yoghurt, muesli, salad, and various ingredients to create a DIY toasted sandwich. For something other than the typical ham, cheese and tomato, allow me to suggest ham, cheese and pineapple instead. It’s not quite a Hawaiian pizza, but it’s close. The buffet is towards one end of the lounge, but that’s not ideal for those at the other end. More choices for breakfast, with a toasted sandwich press just out of frame. Looking for the bar? It’s almost hidden away, over in the far left corner. It’s also where you’ll find barista-made coffee throughout the day. 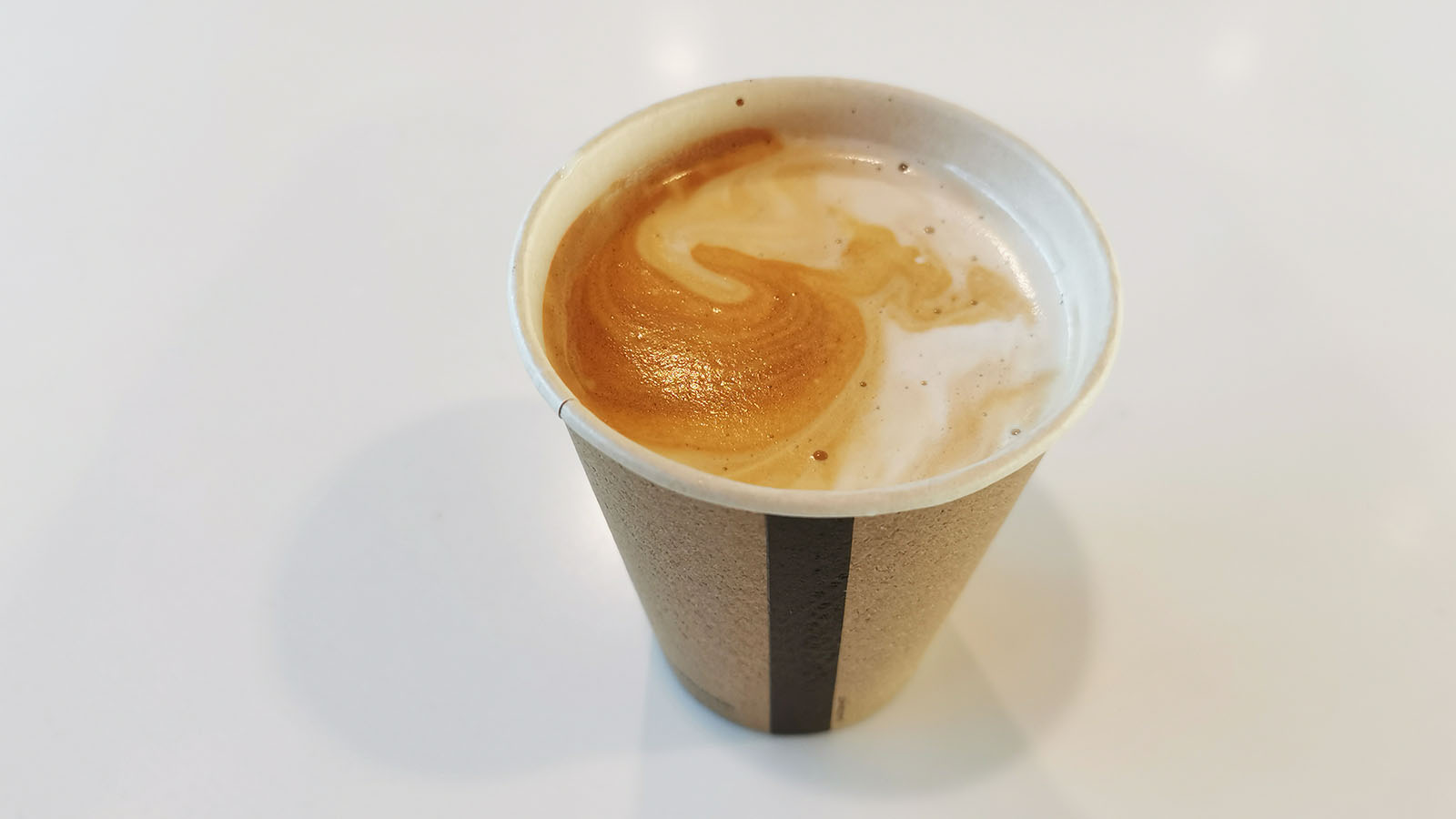 My latte is great, but it’s a shame to have been served in a disposable cup.

Particularly important on this morning’s visit, barista-made coffee is available and served throughout the day. My skim latte is prepared promptly. But with Qantas promoting planet-friendly initiatives like Green Tier, it’s a bit disappointing that disposable takeaway cups are still the norm in this lounge.

A visit to Sydney’s Business Lounge on the same day finds coffee served in mugs and glassware. This really should be the default setting in the Qantas Club, too.

The bar opens at noon, with beer, wine and spirits all complimentary. And if you’re looking for a non-alcoholic alternative that’s not just a plain soft drink, a lemon, lime and bitters is a popular go-to.

Travelling with young kids? There’s a spot just for you in Sydney’s Qantas Club – a dedicated ‘Joey Club’ in the far left corner. There’s seating that’s perfect for the little ones, with a sofa nearby for the kids at heart.

Being one of Qantas’ older domestic lounges, the bathrooms and showers here are adequate, but nothing flash. Compared to the Qantas Clubs in the likes of Melbourne and Brisbane, Sydney isn’t quite in the same league. Hopefully in time, this changes. 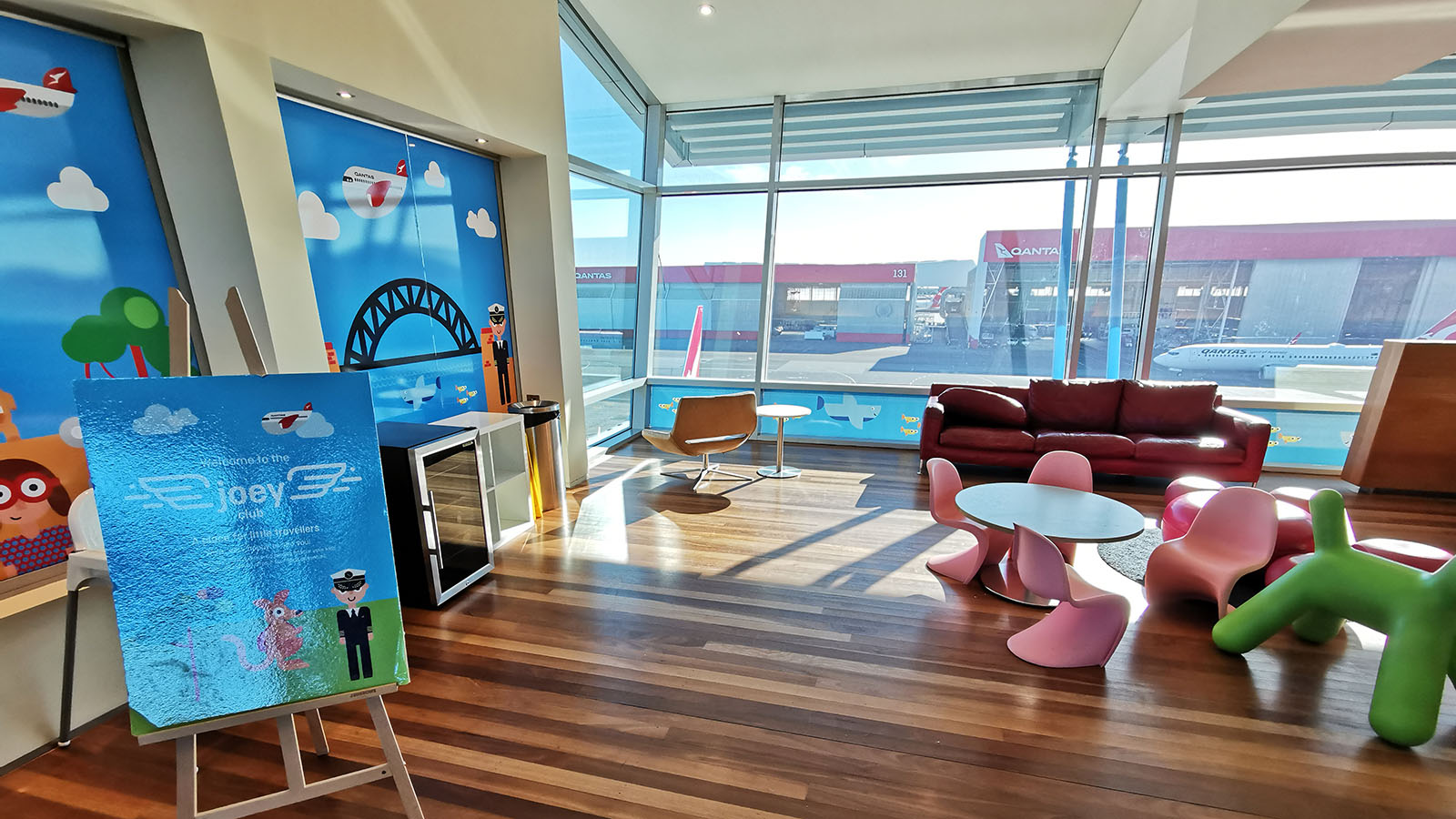 Sydney is one of the many Qantas Clubs to house a Joey Club for kids. The bathrooms and showers here aren’t on-par with those in the Melbourne and Brisbane Qantas Clubs.

Wi-Fi speeds here are always great. Recent visits to the lounge have consistently found speeds exceeding 100Mbps for both uploads and downloads. In other words, if you’re downloading some Netflix content for your flight ahead, you won’t be waiting long.

Of Qantas’ trio of domestic lounges at Sydney Airport, the Qantas Club is certainly the easiest to access. Here’s a list of flyers that call this lounge home – excluding those who qualify for the higher-tier Domestic Business Lounge and Chairman’s Lounge, who would venture there instead.

As above, higher-tiered travellers would instead visit the Qantas Domestic Business Lounge. This includes Platinum-grade and oneworld Emerald frequent flyers, as well as passengers booked in Qantas Business.

The Qantas Club at Sydney Airport is sure to be one of the airline’s busiest domestic lounges – if not the busiest. So it’d be great to see this space upgraded to match its counterparts in the other east coast capitals.

But as it stands today, it’s still a respectable facility. With plenty of room to move, I’m always able to find a seat: even at peak times. Added to that, most travellers would spend 45 minutes or less in a lounge like this. That’s just enough time for a coffee (or wine), snack and a few emails before jetting off.

On each of those fronts, this lounge ticks the boxes with all-day barista coffee, bar service from noon, buffet snacks and fast Wi-Fi. So while the ambience could do with a facelift, the basics are still covered.