As domestic travel bounces back once again, the shutter is up at Melbourne's Qantas Club.

‘Welcome back!’ It’s a term us frequent flyers often hear on every trip – but today, we’re extending that same greeting to Melbourne’s Qantas Club lounge.

As Australia’s domestic border restrictions come down, passenger numbers are starting to pick up. So much so, that Qantas is back running three domestic lounges at Melbourne Airport. Here’s a glimpse at what awaits in the city’s Qantas Club.

Once you’re finished with the airport formalities, veer right as you exit the Terminal 1 security checkpoint. The Qantas lounge lobby then comes up quickly on the left-hand side.

Ascend the escalator, and complete the obligatory Service Victoria check-in (via Android or iOS). As with other hospitality venues in Victoria, only those fully vaccinated against COVID-19 can enter. You’ll make your departure smoother – as well as your time in Victoria – by linking your vaccination status with the app.

After a quick scan of your boarding pass or frequent flyer card at Melbourne’s Qantas Club reception, you’ll then be good to go. Welcome to the Melbourne Lounge Precinct, home to the Qantas Club. With the Business Lounge on your left, the Qantas Club is to the right. 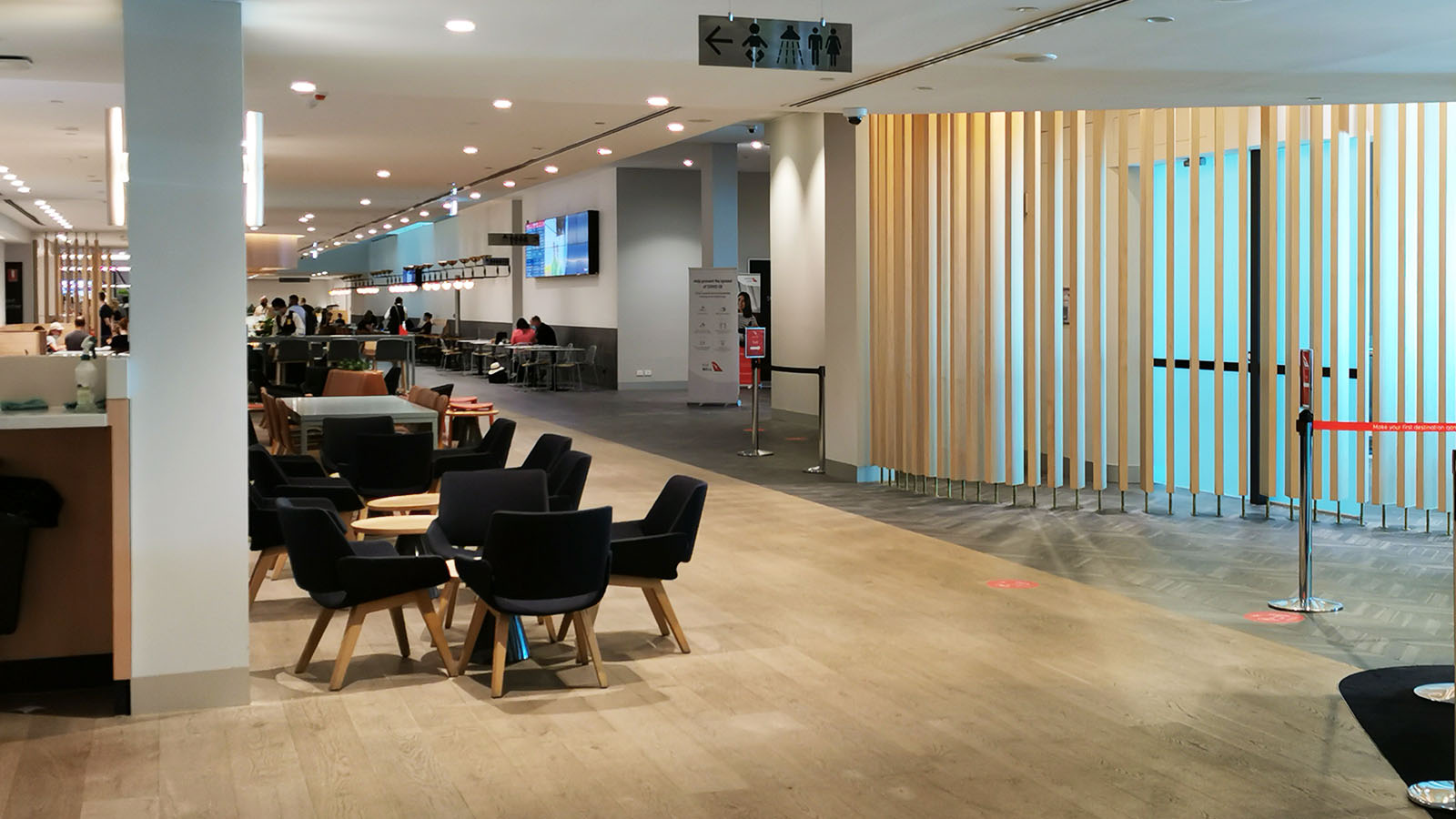 The design of Melbourne’s Qantas Club represents a long rectangle. Inside, the floor plan of the redesigned lounge represents an extended rectangle. Years back, the Qantas Club had airport views – but now, you overlook check-in instead.

If you arrive and the Qantas Club is closed, you’ll be welcomed in the nearby Qantas Business Lounge instead. That’s true even if you’d normally only qualify for the Qantas Club. Generally, this only happens during off-peak times – after 3 pm on a Sunday afternoon, for example.

The shape of Melbourne’s Qantas Club makes it easy to split the space into a variety of zones.

Tucked away behind reception sits a small TV and relaxation room. Nearby, a collection of ‘short stay’ seats – perfect if you’re just waiting for staff to process a flight change and head off for boarding. Making your way through the lounge discovers a broader array of seating choices.

Set up at a table for meals or laptop work, or get comfortable at the island seats. Click through this gallery and take a tour of the Melbourne Qantas Club. With a quiet room just behind reception, these short stay seats are handy for brief pit stops. Walking through the lounge uncovers a wider variety of seats. Whether it’s dining or just a drink, you’re bound to find something to match. 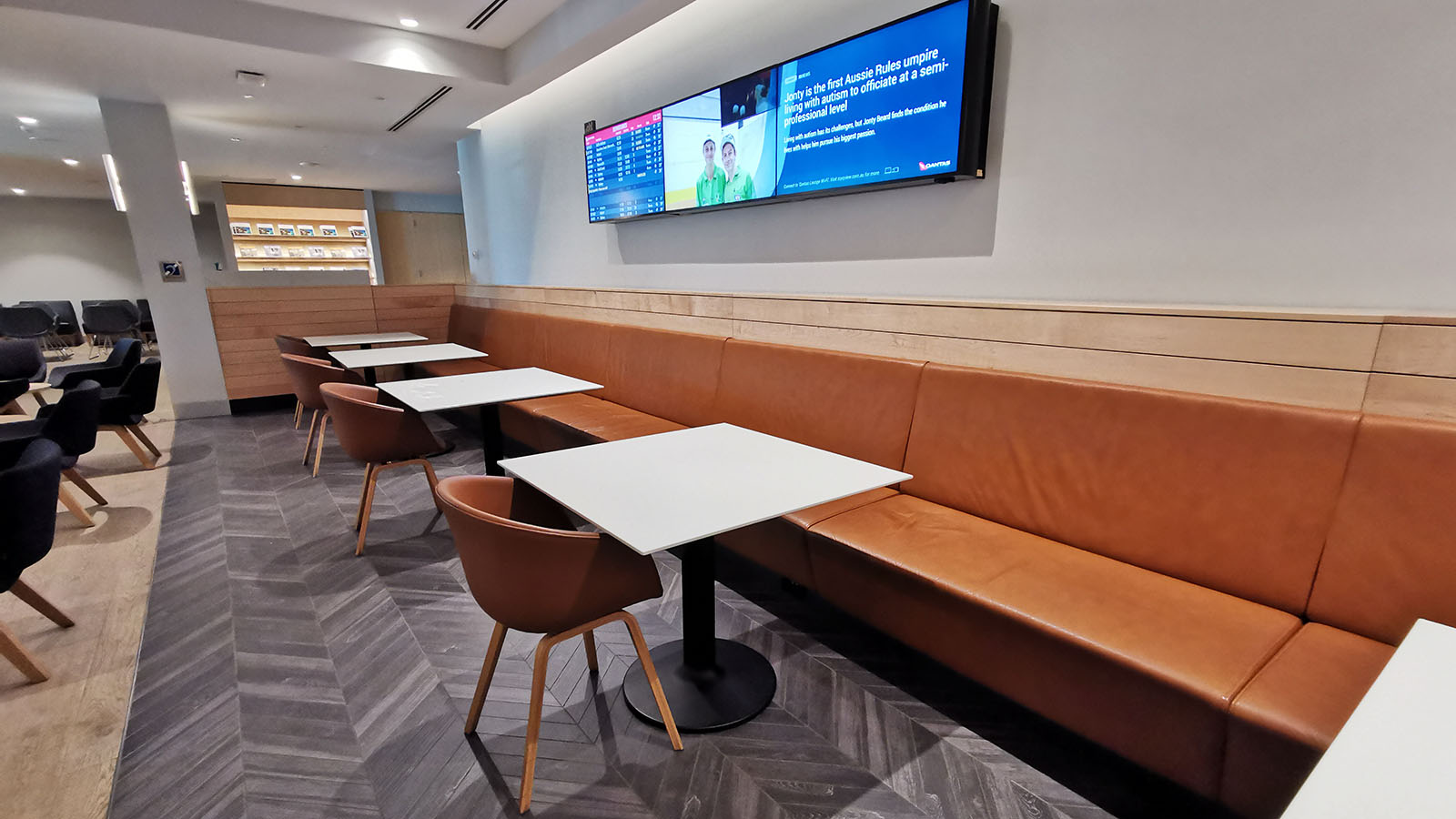 Handy screens throughout the space keep you abreast of the news, as well as your flight status. Melbourne’s Qantas Club was redesigned in 2018. 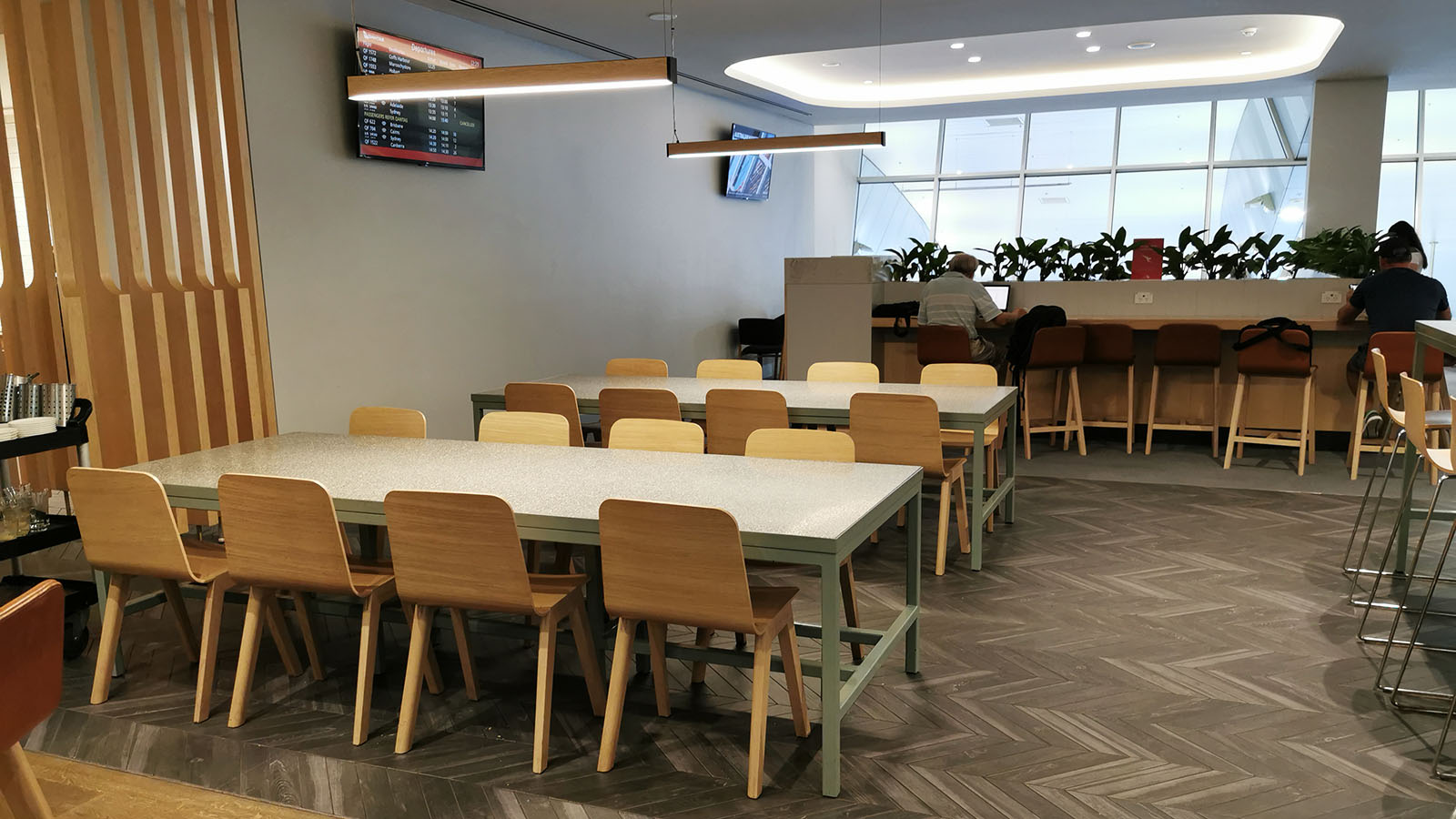 The new space provides dining tables handily near the buffet – but without directly neighbouring the queues. Take your pick of the seats at Melbourne’s Qantas Club. For a quiet drink or some solo laptop work, head to the far corner of the lounge. Heading ‘deeper’ into the lounge uncovers more dining tables, as well as laptop benches with power. Skylight-style lighting complements the natural sunlight in much of the space.

For a quiet spot, head to the very, very back of the lounge. Being the longest walk from reception, these seats only fill up when the lounge is truly busy.

Food and beverage in the Melbourne Qantas Club

Whether it’s beer or a barista-made brew, a central bar has you covered. Expect coffee throughout the day, with alcohol unlocked from 12 pm.

On the dining front, the Qantas Club’s usual buffet is currently running in ‘assisted service’ mode. Just advise the staff what you’d like, and they’ll hand it over for you. Head to the lounge’s central bar and barista counter for any drinks. Selections at the buffet mostly focus on light bites and snacks. 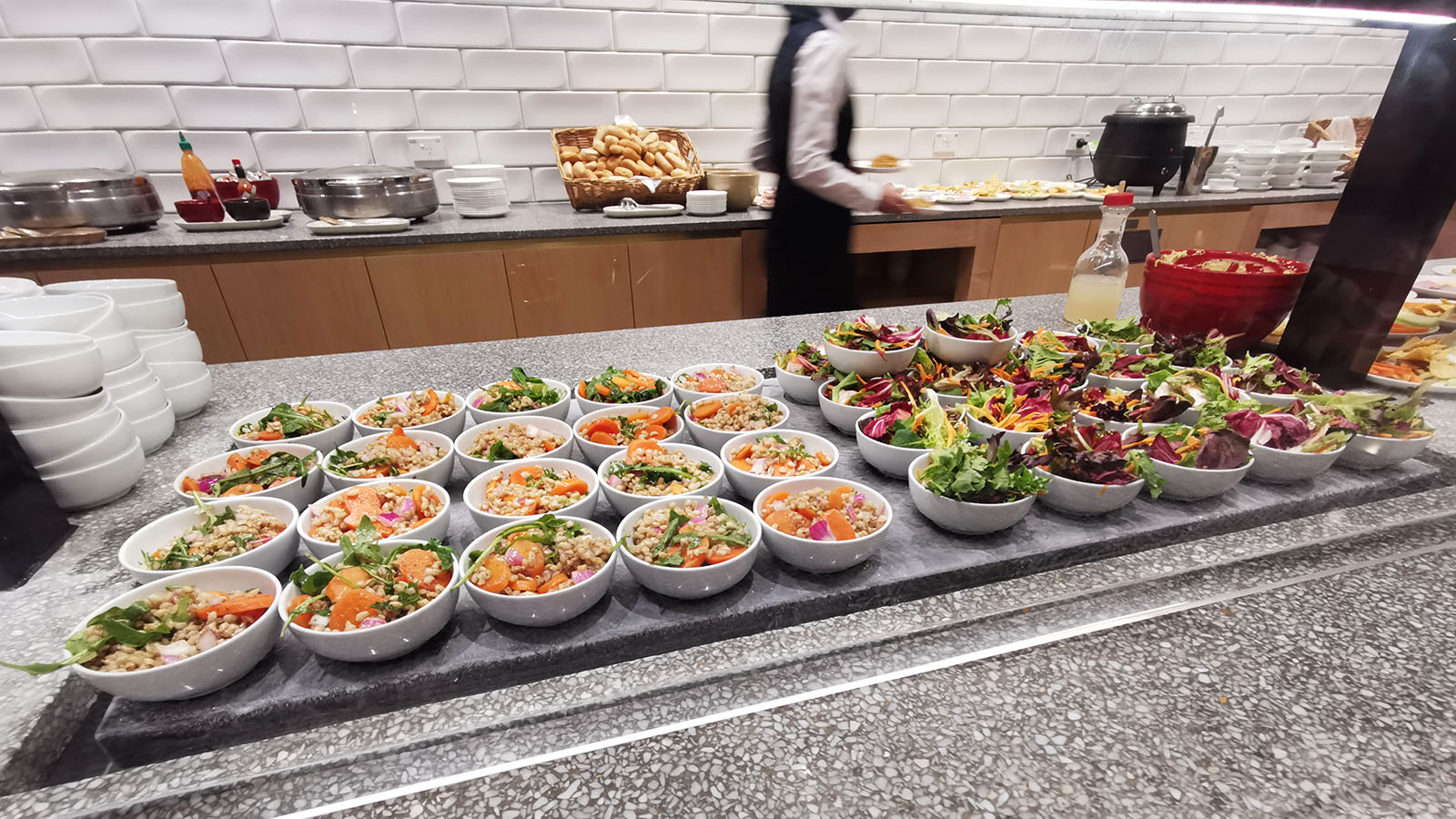 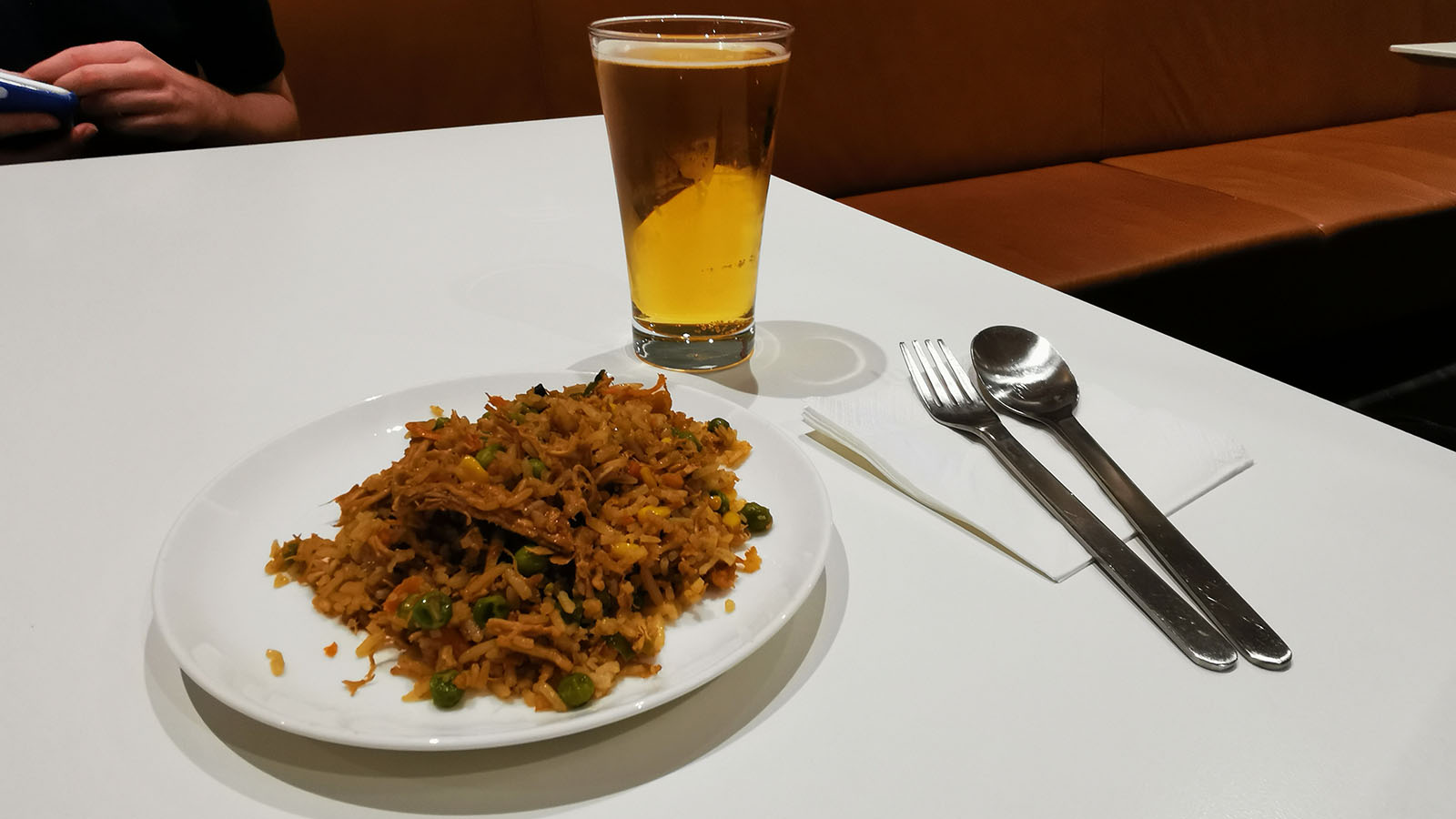 There’s hot food, too – such as this fried rice dish, paired with a Heineken. One of my favourite things about travelling is who you see along the way. Here, it’s great to catch up with Matt Graham of Australian Frequent Flyer.

Of course, dining is more fun with company. It’s great to bump into Matt Graham, Editor at Australian Frequent Flyer. Hope you had a pleasant flight to Canberra!

As part of the renovation and rebuild back in 2018, fresh restrooms and showers were introduced. These are back in full swing – just ask for assistance if you can’t find a towel pack.

The in-lounge service desk isn’t currently in use. For any assistance with your travels, it’s back to reception. 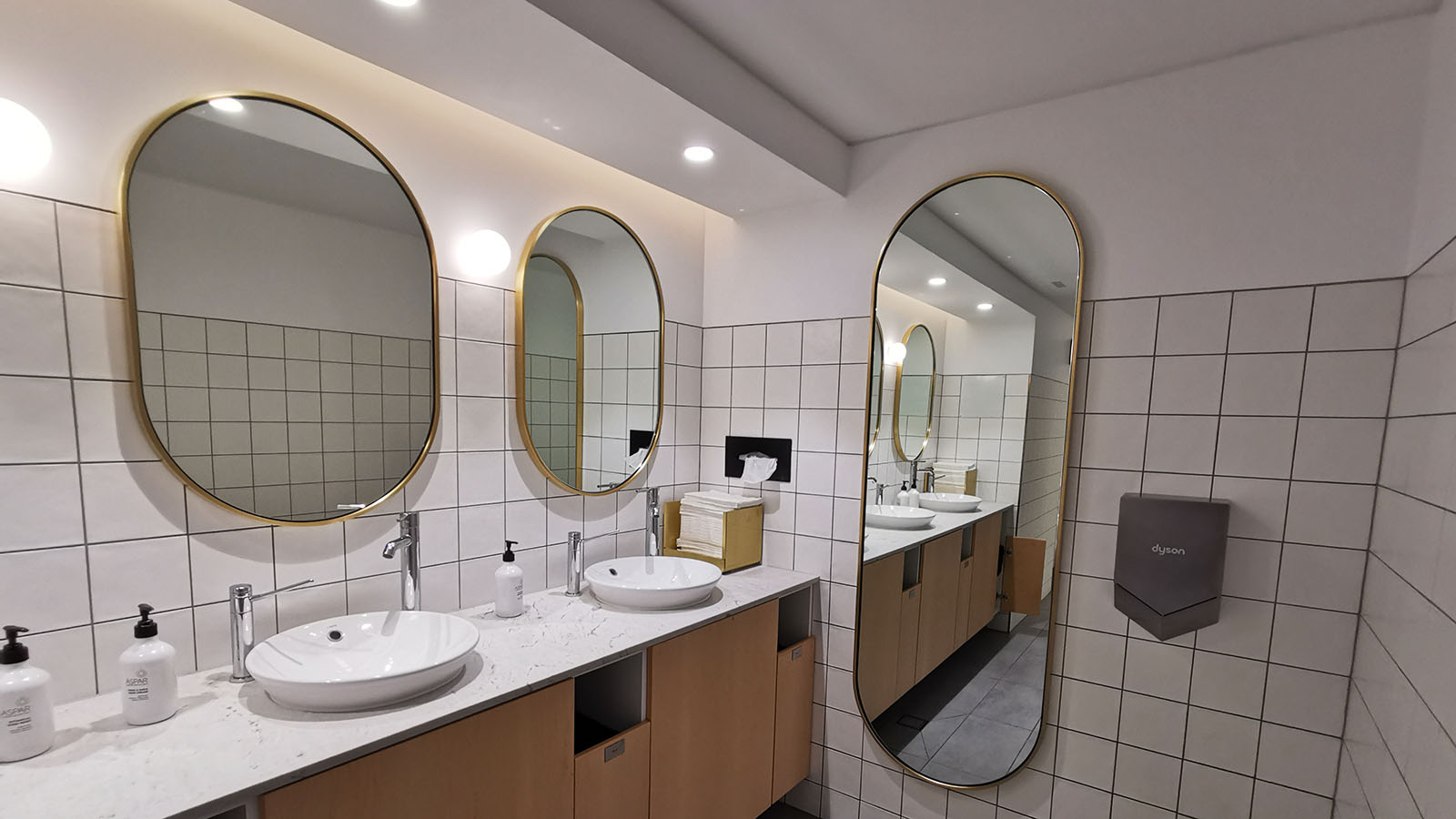 The Qantas Club gained newly-built bathrooms during its 2018 redesign. Qantas is ramping up the features in its mobile app, to reduce the need to visit airport service desks. Sit back, relax, and make the most of your visit.

If you’re planning to unwind and there’s something noteworthy on TV, there are two separate viewing areas. One, just behind reception, and two, in the far back corner of the lounge.

Watching something via your own device instead? With Wi-Fi speeds exceeding 130Mbps in both directions, your stream should be crystal clear.

With two other domestic lounges at Melbourne Airport – a Business Lounge, and a Chairman’s Lounge – here’s who the Qantas Club normally caters for.

Children (under 18 years) are permitted in addition to the guest allowances indicated above. These exceptions vary by the child’s age. Head to the Qantas website to check the latest arrangements.

Do note, Jetstar flights all depart from Terminal 4 at Melbourne Airport. This lounge, however, is at the very opposite end in Terminal 1, and past security. While a Jetstar boarding pass can get you through the door, it’s not particularly convenient given the long walk.

If you have Priority Pass and don’t have hours to spare, consider visiting the Rex Lounge in Terminal 4 instead.

After nearly two years of lockdowns and travel restrictions, it’s great to see Melbourne back in action. Ditto the airport, with passenger volumes once again allowing Qantas to operate multiple Melbourne lounges.

Prior to COVID, it was common to find the Melbourne Qantas Club rather busy. This isn’t often a problem now – and if that changes, at least it’ll means domestic travel is back on-track.

Still, we do miss the airport views from the former Qantas Club. They’re now a perk reserved for guests of the Qantas Business Lounge and Qantas Chairman’s Lounge. But with only so many windows to go around, we can’t exactly say that’s unfair!