Booking a Qantas ‘Round the World’ trip from Perth or Adelaide

You can still enjoy a magnificent oneworld Classic Flight Reward trip out of WA or SA.

We know, it’s no fun when the eastern states get all the attention. So if you live elsewhere in our vast country – particularly in Perth or Adelaide – then this Qantas oneworld Classic Flight Reward guide is for you. But first, check out our main guide to flying around the world in Business Class so you’re across the rules.

So what exactly is different from flying out of Perth and Adelaide? Well, you’ll have fewer airlines to choose from. But because of each city’s geographical positioning, you might get some great value out of a oneworld reward ticket.

What’s the best use of Qantas Points from Perth or Adelaide?

Here are the points needed to fly from Perth or Adelaide to London, either with Qantas or oneworld partners. Notice how flying Adelaide-London return with a oneworld partner costs the exact same as a oneworld Classic Flight Reward, which could send you around the world instead.

Departing from Adelaide, you could fly almost double the distance (up to 35,000 miles) and have five free stopovers for no extra points cost in any class of travel.

If you’re departing from Perth (like me), the value of the oneworld reward is diminished compared to a simple return. Perth is closer to Europe than Adelaide and falls into a lower distance bracket. But it’s still not a bad deal overall.

Taxes on these rewards usually range from $1,000 to $2,000 per person. It depends heavily on what airlines and choose and what airports you depart from. For example, Qatar Airways charges much higher carrier charges than Malaysia Airlines. Meanwhile, the UK Air Passenger Duty adds £180 (~AUD$335) per person if you fly out of the country in Premium Economy, Business or First Class. Ouch!

Should I aim for Business or First Class?

From Perth and Adelaide, the only airline regularly operating a First Class cabin is Emirates. But Emirates is not part of oneworld, so you won’t have any luck there. If you did want to pursue a First Class reward booking, you’d best look at flying to Sydney or Melbourne first. Here are the latest airlines offering First Class in 2022.

Luckily, travellers from both cities have access to some of the latest and greatest Business Class products. We highly recommend you focus on a Business Class reward. This roster usually includes: 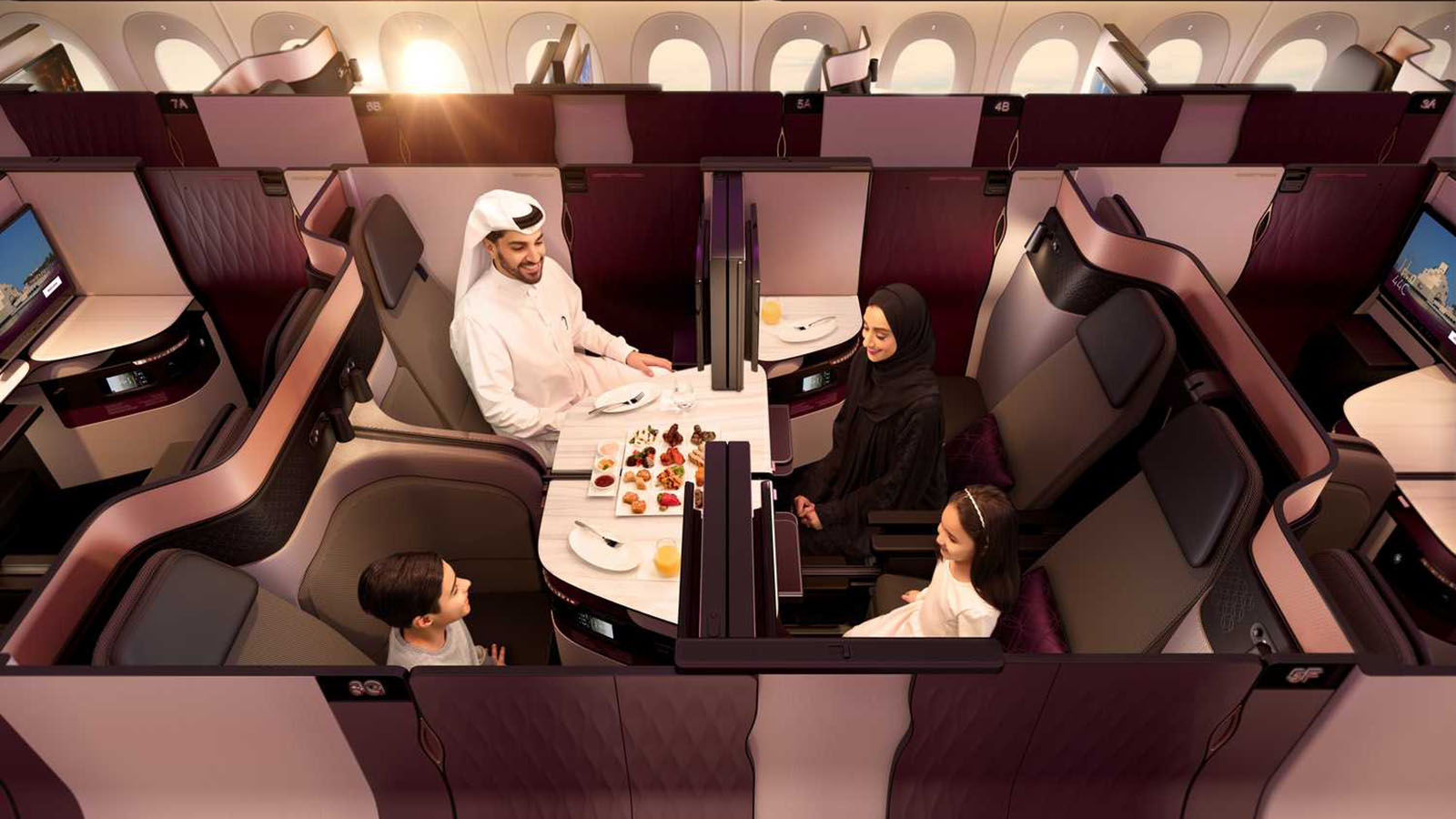 Fly Qsuites on Qatar Airways flights out of Australia. Malaysia Airlines Business Class is a good way to fly from Perth or Adelaide. Business Class on Cathay Pacific’s Airbus A350s is the airline’s most comfortable yet. Get comfortable in Qantas Boeing 787 Business to London. Sit back in Qantas Airbus A330 Business Class.

It’s quite tricky to get premium cabin seats on the direct Qantas Perth-London flight. The exception is if you hold Qantas Platinum status or higher, and request for extra seats to be released.

At the time of writing, Qatar Airways is only releasing one Business reward seat on flights from Australia to Doha. It’s easier to find availability on Cathay Pacific and Malaysia Airlines.

If you hail from WA and want to see as much of the world as possible with a single ticket, then this jam-packed itinerary is for you. It covers 34,670 miles of travel and costs 318,000 Qantas Points in Business Class.

Time-poor and living in the City of Churches? This example from Adelaide uses our hack to enjoy two holidays for the price of one by starting your oneworld reward overseas. If you haven’t read that article yet, get onto it first! Rather than going around the world, we’ve split the ticket into two distinct holidays instead:

The two trips are separated by an extended stopover in your hometown of Adelaide, where you’ll take a break.

You start this journey with a positioning flight from Adelaide to Bali (in white). This can be with any airline of your choosing, as it’s separate from the oneworld ticket. You could use a low-cost carrier like Jetstar to get there. Once you’re in Bali, your oneworld reward ticket begins.

You’re using a stopover in your hometown of Adelaide as a break between holidays. This break can be weeks or months – it’s up to you. Remember, you just need to finish the whole trip within 12 months of your first flight on the ticket (Denpasar to Kuala Lumpur from Holiday #1).

When you’re ready to embark on the second half of your ticket, your flights are:

All up, that’s 32,780 miles travelled, including the positioning flight from Adelaide to Denpasar. We need to take that into account as you’re finishing in a different city from where you started.

While living outside of Sydney, Melbourne and Brisbane narrow your choices somewhat, you can still enjoy a big round-the-world holiday out of Perth and Adelaide without any backtracking. Qatar Airways, Malaysia Airlines and Cathay Pacific are the main carriers you’ll be looking at.

Qatar Airways does have the amazing Qsuites product, but keep in mind its carrier charges are also the highest. Malaysia Airlines and Cathay Pacific are more modest with charges. And if you simply can’t find any reward seats, try flying via the eastern states as a last resort.

Finally, Qantas Classic Flight Rewards are flexible during COVID-19. Check the Qantas website to see what the latest fee waivers are for changing or cancelling a reward seat booking.

Have you successfully redeemed your Qantas Points for a oneworld reward out of Perth or Adelaide? Let us know in the comments!

This guide was originally written by Daniel Sciberras.

Booking a Qantas ‘Round the World’ trip from Perth or Adelaide was last modified: November 19th, 2021 by Brandon Loo

Which airlines will offer First Class in 2022?