An analysis of KrisFlyer’s March 2017 devaluation

A couple of weeks ago, Singapore Airlines’ frequent flyer program KrisFlyer announced its first change in award pricing in five years, affecting flights ticketed from 23 March 2017 onwards – and that day has crept up, so if you’re sitting on a KrisFlyer balance, it could be time to act.

In short – KrisFlyer are increasing the cost of many awards but also reducing the amount of taxes and charges to pay in cash with them. If you want to book at the lower points prices, you should look at this in the next couple of days.

At the time we noted that the increase in some award pricing and elimination of the online booking discount look negative, when you factor in the savings on fuel surcharges, in some cases you’ll come out ahead and in others paying more, so it’s worth looking at the big picture.

Here’s our summary from when the changes were first announced.

What is staying the same?

A nifty feature of KrisFlyer was the ability to access a 15% discount on award flights when booking online or via the mobile app, and in cases where you had to phone the call centre because you could not complete an online booking and they would honour the discount. 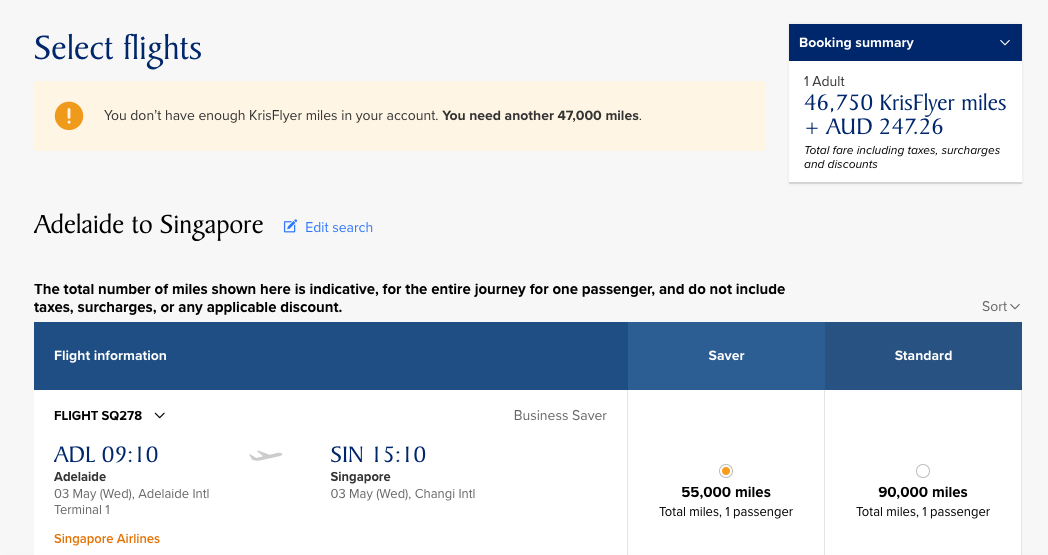 This discount will now be eliminated, bringing the program into line with most of its competitors.

Even though KrisFlyer’s fuel surcharges were neither low like some US airlines nor extravagant like British Airways or Lufthansa, the elimination of these charges helps to temper the increase in award pricing on some routes and, in fact, reduces the real cost of awards to medium-haul destinations like much of Asia and the Middle East.

In welcome news, you’ll no longer be liable to pay fuel surcharges (YQ) on Singapore Airlines or SilkAir award flights

Change 3 (mixed): Increase in Saver award pricing on Singapore Airlines and SilkAir flights in 5 of 13 zones

I have analysed the change in points pricing on a range of routes from Australia and deepened the analysis by calculating how much you will save or be out of pocket when factoring in the savings on fuel surcharges you will no longer have to pay.

I made the following assumptions:

Some people would value KrisFlyer miles lower than our current 2.2c valuation so you’ll need to bear that in mind when reading the results.

On the surface, it doesn’t look good when you look at an average increase in outright redemption pricing of 27% across these routes.

However, when we factor in the estimated savings you’ll make on fuel surcharges, with these examples and our valuation of miles, only an average increase in real cost terms of 6%.

Let’s look at the first and last examples:

Whilst a one-way Business Class award from Perth to Singapore will increase 18% from 27,650 to 32,500 miles, we think you’ll now save $166 in fuel surcharges. It’s hard to say for sure, but that’s our assumption at this point.

Looking at the last example of a First Class ticket from Sydney to London, you’ll be up for a 31% increase in terms of points required but will save $356 in fuel surcharges, tempering the overall real cost increase to only 15%.

Our take: how the changes will affect you

The winners (or lowest losers) in these changes are travellers based in Perth and Darwin wanting to travel anywhere except North Asia, Europe and the US (East and West Coast).

Those four zones, along with the rest of Australia and New Zealand, are the only ones that have increased their pricing, with all others staying the same.

That means that if you are planning on booking travel from Perth or Darwin to a zone other than those mentioned above, it would be best to hold off until after the changes as your real cost will decrease.

If you are going to one of the long-haul destinations, you’ll save by booking before the changes occur.

If you are based near one of the other Australian airports that Singapore Airlines serves (Sydney, Melbourne, Brisbane and Adelaide), it would be best to book in the next three weeks as all flights from this zone will increase in price, regardless of destination.

This applies if you are currently waitlisted for a flight too, so try to get it ticketed before 23 March or else the new pricing will kick in.

Finally, if you’re travelling between or within any of the eight zones that are not affected by increased pricing, such as Cape Town to Singapore or Manila to Jakarta, you’ll be better off waiting.

The following Point Hacks guides have been updated as a result of these changes:

What do you think of the changes? And how will they affect your travel plans?

What’s a point worth? Here are our latest valuations