Now with Brisbane in its jet network, Rex serves every point on the Golden Triangle.

Although Rex’s schedule won’t suit every trip – from Brisbane to Melbourne, there are currently just 1-2 flights each day – its value proposition still caters to both business and leisure guests. Here’s what to expect at the pointy end with Rex.

Rex’s check-in counters are easy to find at Brisbane Airport, being in the very centre of the domestic terminal. There’s a dedicated lane for Business Class flyers, so I’m assisted in mere moments. There are kiosks and self-serve bag drops too, for those preferring the ‘DIY’ approach.

Brisbane Airport’s domestic security points unfortunately don’t offer fast-track lanes for Business Class travellers. But with only five passengers ahead of me in the queue at 7 am on a Monday, the formalities didn’t take long.

In lieu of lounge access at Brisbane Airport, a Rex Business Class ticket buys you $15 to spend after security. That came as a nice surprise, as I hadn’t expected a lounge alternative to be offered.

Having several outlets to choose from, Rex’s check-in staff suggested Newstead Brewing Co. The voucher covers the bulk of the bill for a breakfast muffin and a barista-made coffee. With breakfast also served on the flight, that was more than enough to kick-start the day. 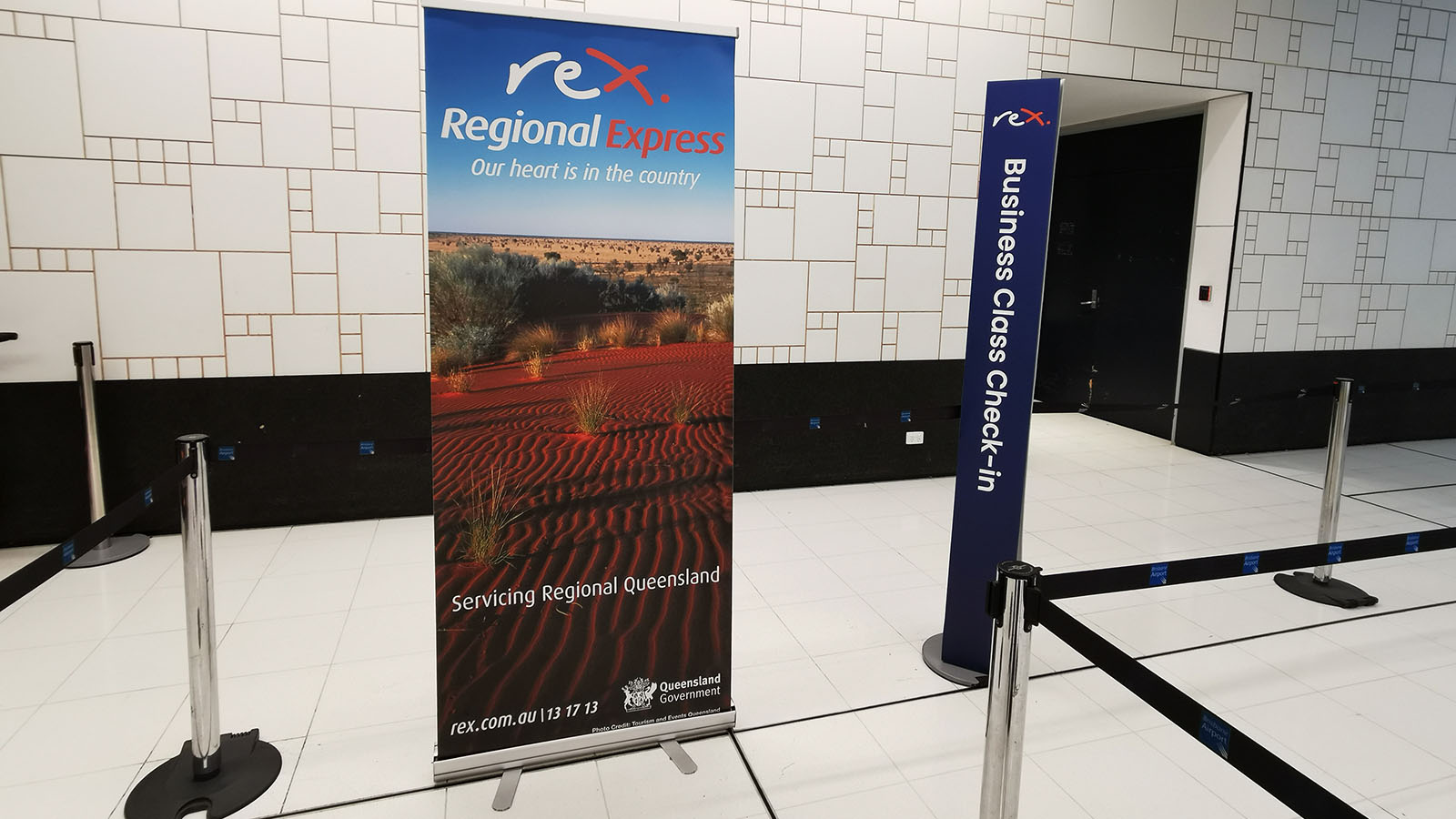 Until a lounge is available, Rex Business Class guests receive a meal voucher to spend at Brisbane Airport. 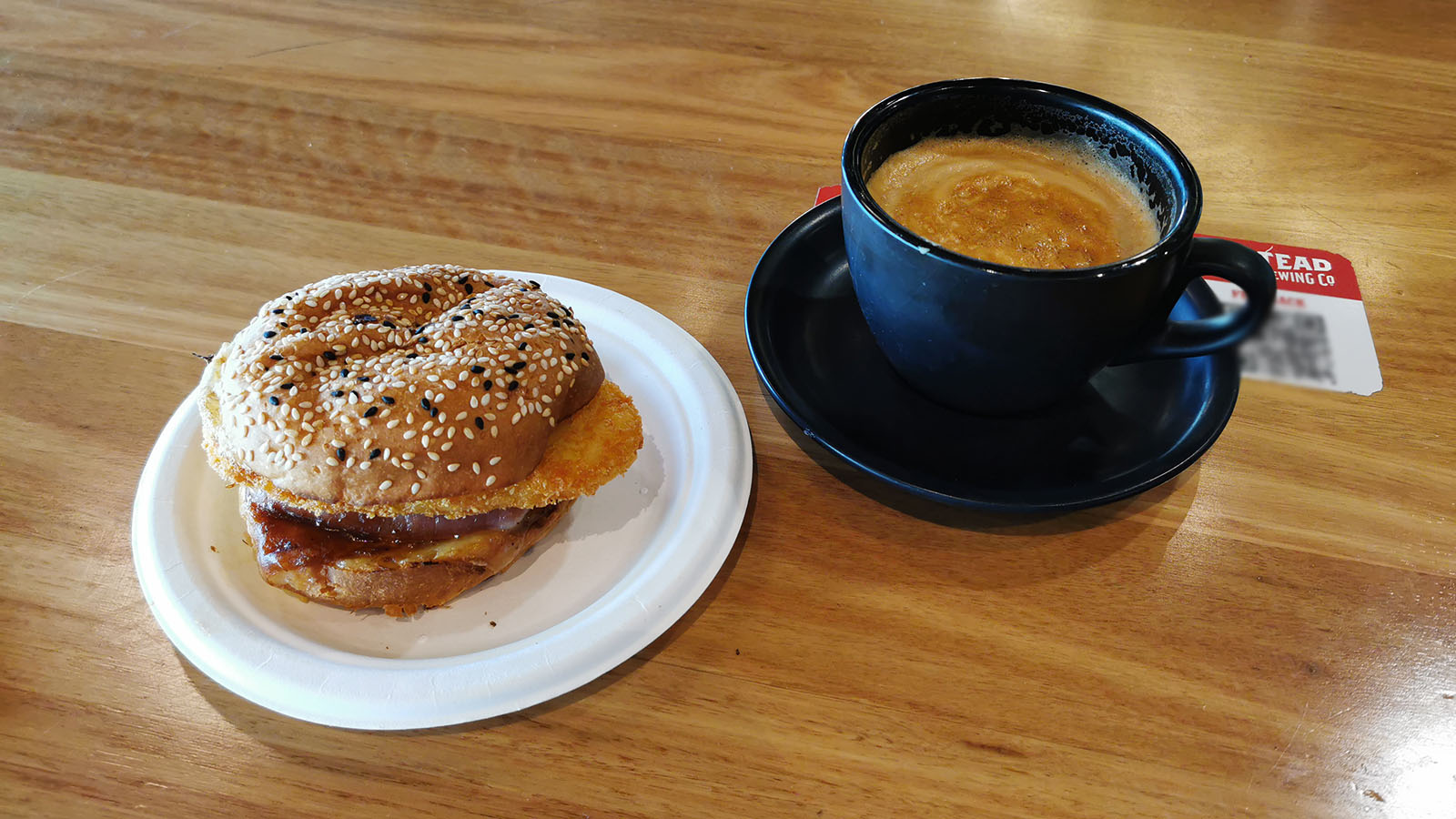 $15 doesn’t buy much at Brisbane Airport, but covered the bulk of this $21 purchase. 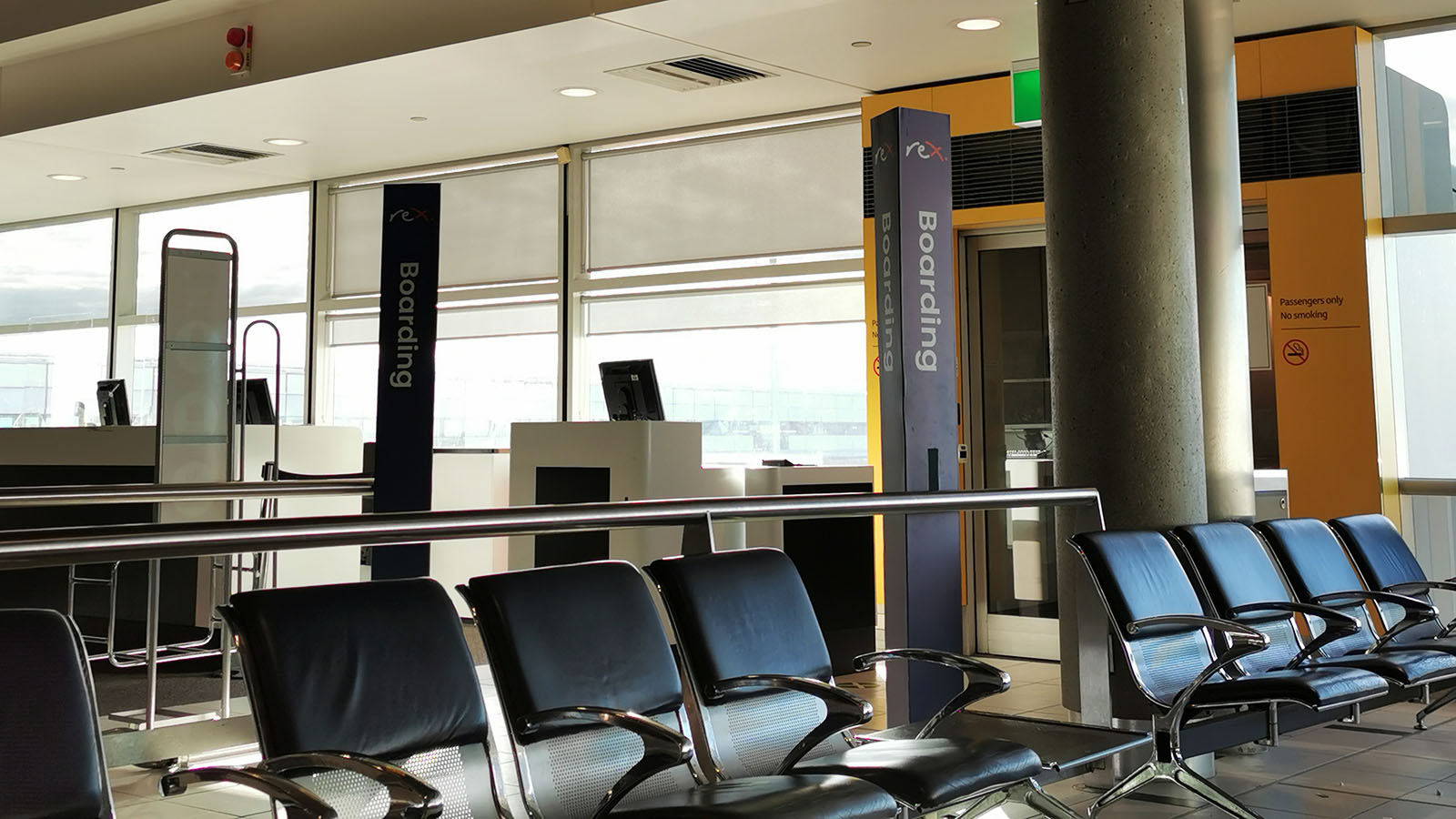 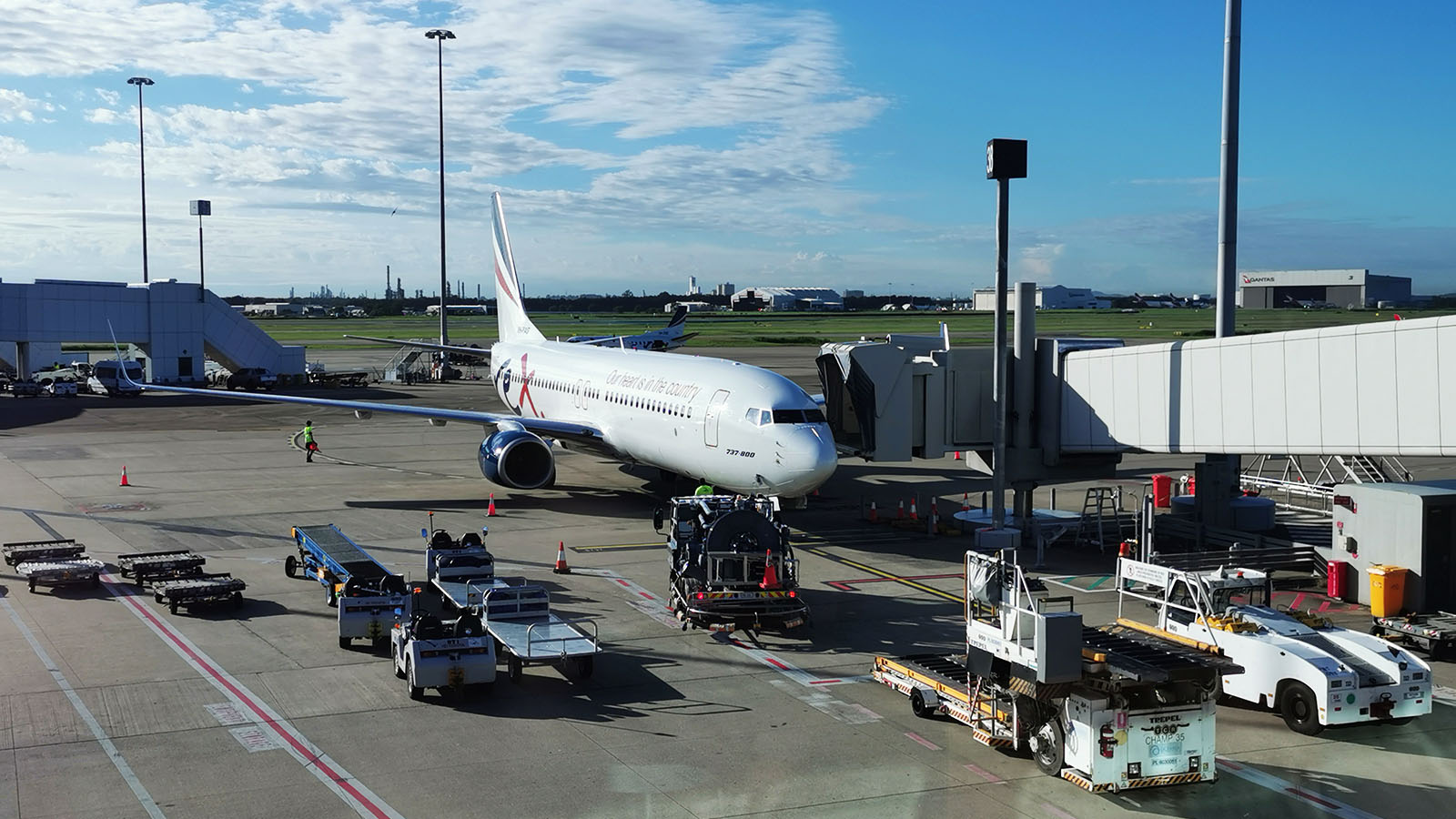 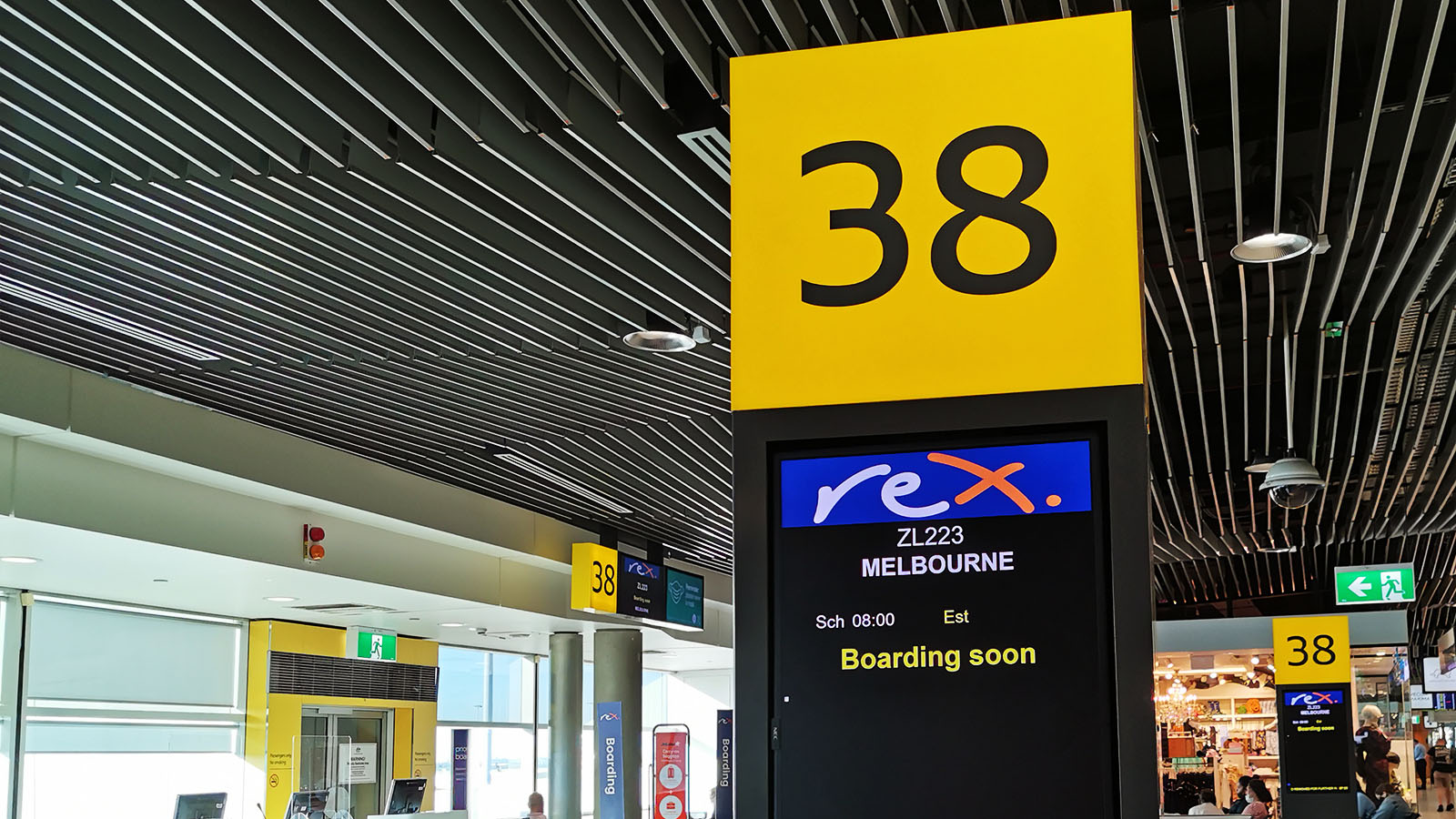 Departing from gate 38 meant an aerobridge was available.

With the flight departing from gate 38 – right behind security, directly above Rex check-in and next to Newstead Brewing Co. – everything is conveniently close together. Speaking of convenience, Business Class boards first, and we’re soon ready to depart.

As we push back for departure, a Rex Saab 340 slides into view. 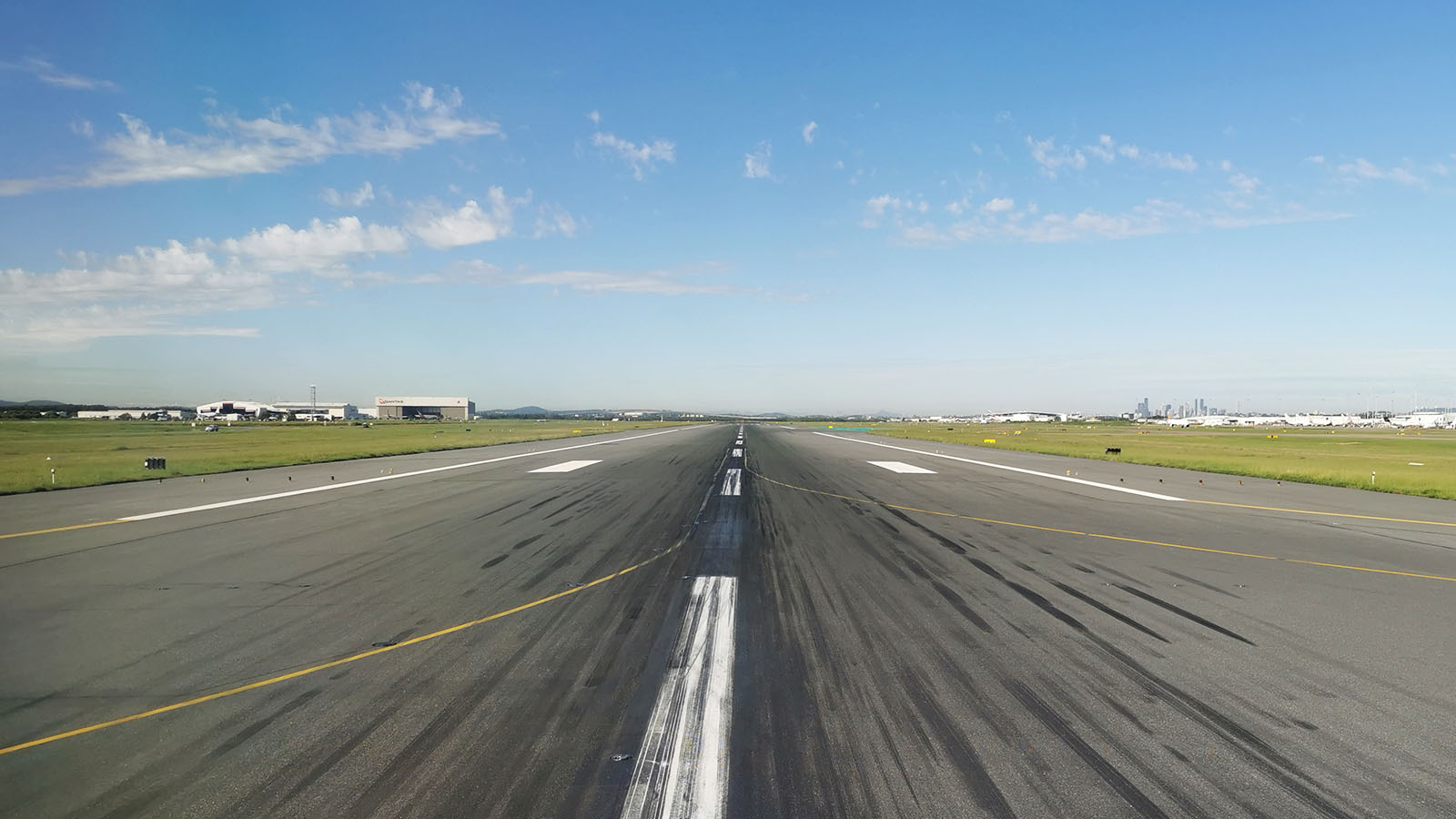 It’s a good day for flying from Brisbane Airport! The Brisbane River appears browner than usual, but the city’s flood levels have subsided.

As a contrast to Brisbane’s recent poor weather and flooding, the sun was out and shining brightly, making for some excellent views. It also brought Brisbane’s heat back, which is where I appreciated Rex using an (air-conditioned) aerobridge gate.

Business Class on Rex provides a comfortable reclining seat. With a 2-2 cabin layout across two rows, eight Business Class seats are available on each flight.

If you’re not already familiar with Rex, its Business Class product may still look familiar. The seats mirror what you’ll get on most Virgin Australia Boeing 737 flights. In fact, Rex’s Boeing 737s previously flew in Virgin Australia colours, with Rex simply tweaking the cabin to match its own branding. With a divider behind Business Class, you can recline in row two without bothering anybody. These seats may look familiar, but the updated Rex branding is hard to miss. Bulkhead seats can sometimes be tight, but there’s plenty of legroom in row one.

When the seat is already comfortable, and travellers have grown to like it, we can see why Rex wouldn’t replace something that’s known to work. And work it does. Taking my seat in 1F, there’s plenty of room to stretch out and get comfortable, even with the bulkhead wall in front.

A central cocktail table is perfect for keeping beverages at hand. There’s also a storage pouch in front of every seat. I like that the pockets in row one separate your own bits and pieces from the supplied literature. It’s also roomy enough to store my laptop, without being a tight squeeze. This cocktail table is handy for keeping drinks – or even your phone – close by. There’s a storage pouch for every passenger. They’re large enough for laptops, with my Surface Pro an easy fit. Looking for the tray table? Try lifting up your armrest. For maximum stability, pull the tray towards the centre console after folding it open.

For even more space, your tray table emerges from within the armrest. Open it halfway for a second cocktail table, or all the way for a sturdy surface. Pulling it towards the centre console gives it something to rest on, and helps avoid your meal or laptop bouncing around.

Regardless of the specific fare type you purchase, all food and beverage is included with your Rex Business Class ticket.

Being an 8 am departure, the journey kicks off with a pre-flight offer of orange juice or a refreshing sparkling water. Tea and coffee are also available straight after take-off, before the main meal service. That’s great when you’re still waking up from an early start! Enjoy a drink before take-off in Rex Business Class. Tea and coffee are yours after take-off. It’s not Nespresso, but it’s certainly drinkable. 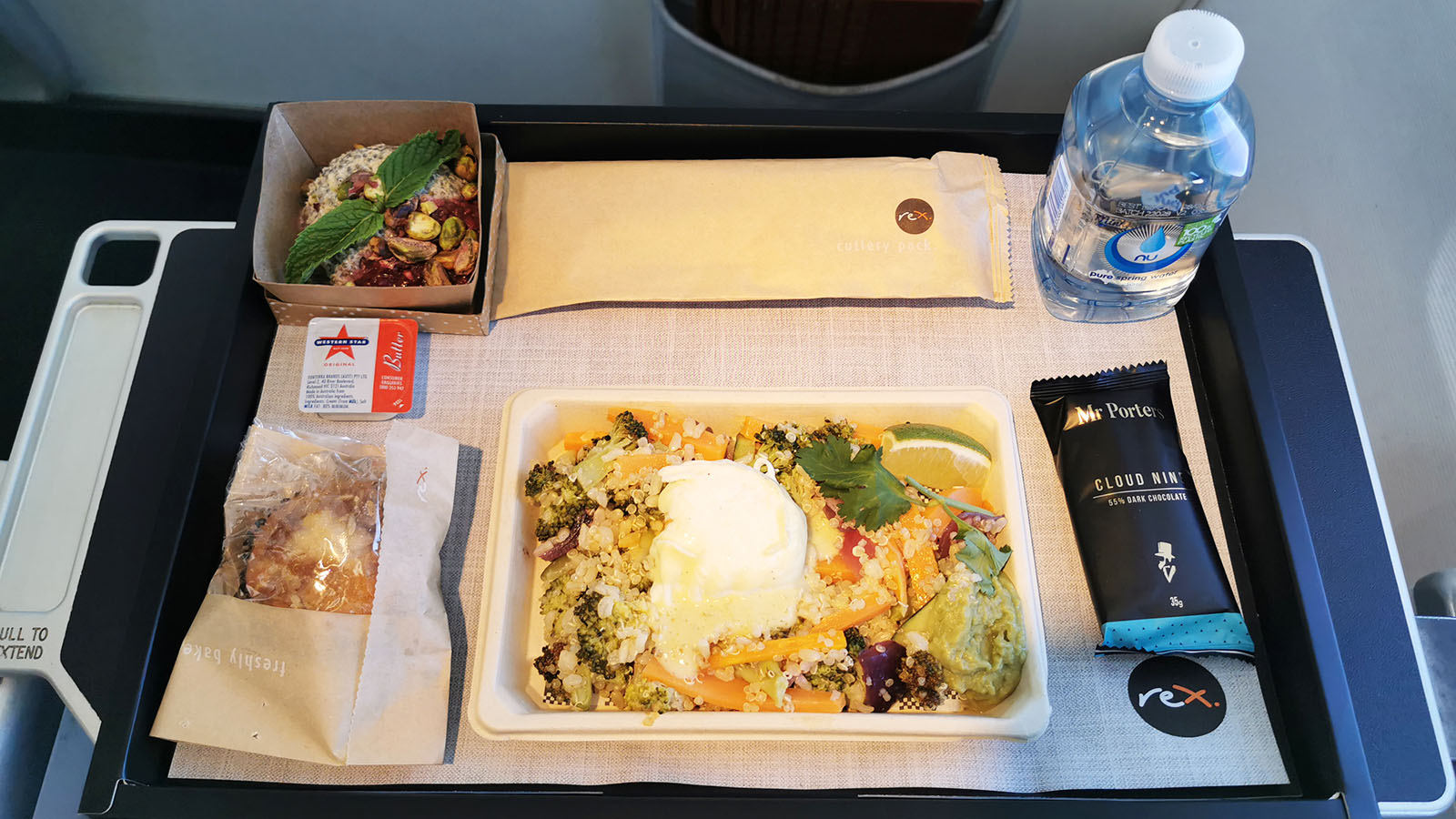 While you can’t pre-order special meals, the choices available will suit most. If your pre-flight meal and onboard breakfast don’t fill you up, the snack basket isn’t far away!

Orders are taken for the breakfast main from the following choices:

Had I not already eaten using the airport voucher, the hot option would have been great. But for something lighter, the cold option came as a solid brunch dish.

You certainly won’t go hungry, with several sides on the tray, plus a pass of the snack basket an hour later. Pro tip: grab a delicious chocolate cookie for the road.

Many parts of the Rex experience mirror its competitors, and that includes WiFi. Four of Rex’s six Boeing 737s are already equipped with both satellite Internet and streaming inflight entertainment. The latter is free for all passengers, with WiFi also complimentary for those in Business Class.

Unfortunately, the jet ferrying me to Melbourne wasn’t one of those WiFi-equipped birds, so I couldn’t test it this time. But Rex advises that WiFi will spread to the remainder of its Boeing 737 fleet soon.

I always come prepared with alternative entertainment as a just-in-case, and that served me well here. After a little work and an episode of Kim’s Convenience pre-downloaded in my Netflix app, it was time to buckle up and prepare for our arrival. Video entertainment is available on most of Rex’s jet fleet using your own device. Service in Rex Business Class is friendly, without being too familiar. [Image courtesy of Rex]

Rex’s True Blue inflight magazine can be found in your seat pocket.

On the service front, cabin crew are friendly and efficient, without being too familiar or distant. It’s the perfect setting for a flight like this, particularly with passengers busy working on laptops.

Before long, Victoria comes into sight, and it’s time to touch down.

One slight hiccup: in Brisbane, it seems the staff forgot to tag my bag with Business Class priority. Those other priority-tagged bags came out first, with mine a few minutes behind.

But still, we arrived early into Melbourne. Given I was kerbside with my luggage before the flight was even scheduled to land, Rex certainly proved to be a reliable option for this business trip.

Rex Business Class is a comfortable way to fly, and it’s easy on the hip pocket too. With fares selling from just $299 each way, Rex puts premium travel within easy reach.

I also couldn’t help but notice that when searching fares the day before travel, Rex Business Class could still be snapped up for $299 on this service. Yet a Qantas Economy Red eDeal was $271 for an equivalent flight. In that scenario, paying just $28 more than Qantas Economy could land you a Business Class trip with Rex.

That won’t always be true, especially when booking further in advance where Economy Class can cost less. But even if you’d normally be drawn to other airlines, keep Rex in your sights.

I don’t know about you, but if I can get Business Class for just $28 more than Economy Class, I’d pay the difference every time! And on its own, $299 for a gate-to-gate Business Class experience on one of Australia’s most popular domestic routes is still a steal, whichever way you look at it.

Photography by Chris Chamberlin, who travelled as a guest of Rex. Feature image courtesy of Rex.