On journeys within Australia and abroad, the Qantas Club awaits at Gold Coast Airport.

Serving both domestic and international passengers, the Gold Coast Qantas Club is a little different to most. Without a separate Qantas Domestic (or international) Business Lounge here, it’s the go-to space for many frequent flyers.

Whether you’re beginning your journey in Queensland or your visit marks the start of a journey home, here’s what to expect here in Coolangatta.

Nestled just beyond security, you’ll find the Gold Coast Qantas Club on the left-hand side of the main concourse. And speaking of security, the priority screening lane here works well.

Despite a long queue in the general line, use of the fast-track lane means I’m through to the lounge within minutes. Modern baggage scanners at Gold Coast Airport also make it possible to leave all laptops and aerosols inside. This speeds things up even more. The Qantas Club entrance is easy to miss, so keep an eye out for the signs. A larger and on-brand Qantas Club sign would make the lounge more noticeable.

Still, the lounge’s subtle entrance is easy to miss. Tucked away at the end of a white and grey corridor, there’s nothing distinctive to catch your eye – so keep a lookout for the signs.

This lounge opens one hour before the day’s first Qantas flight departure and closes when the last Qantas flight is called for boarding. It also serves eligible passengers travelling on Air New Zealand: more on that later.

The Qantas Club layout and seating at the Gold Coast

At Gold Coast Airport, the Qantas Club provides a cosy space with an array of seating. Being a busy airport, but not a capital city, the lounge adopts many of the elements you’d expect at those larger hub lounges.

For instance, this space offers many zones for kicking back and relaxing. That’s countered by the presence of several working benches with power at the ready. There’s also a small Joey Club area in the corner for kids. Sit back and relax at the Qantas Club. 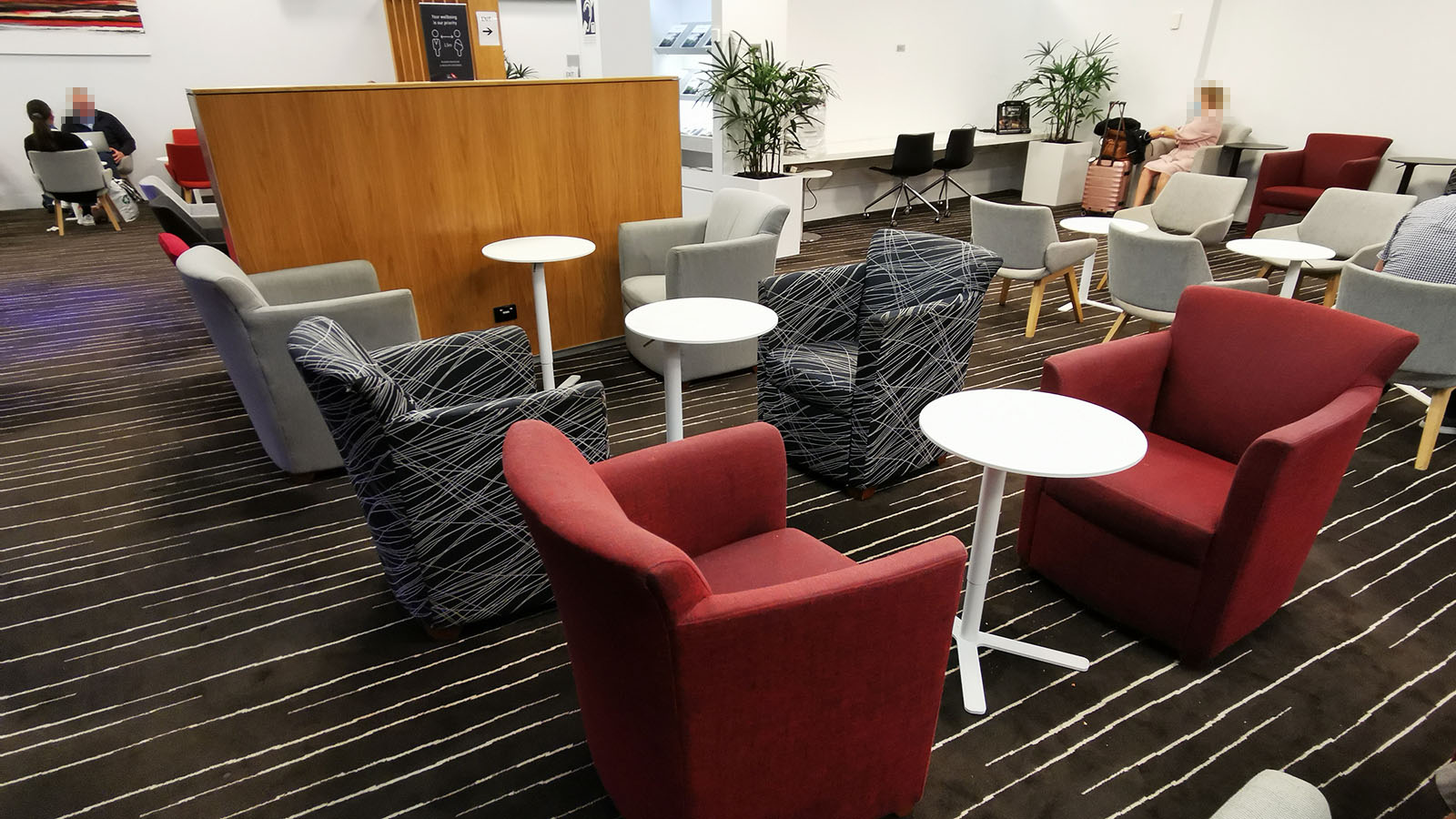 The lounge’s design style blends a city feel against a more regional vibe. This lounge is constrained by available space, with as many seats made available as possible. 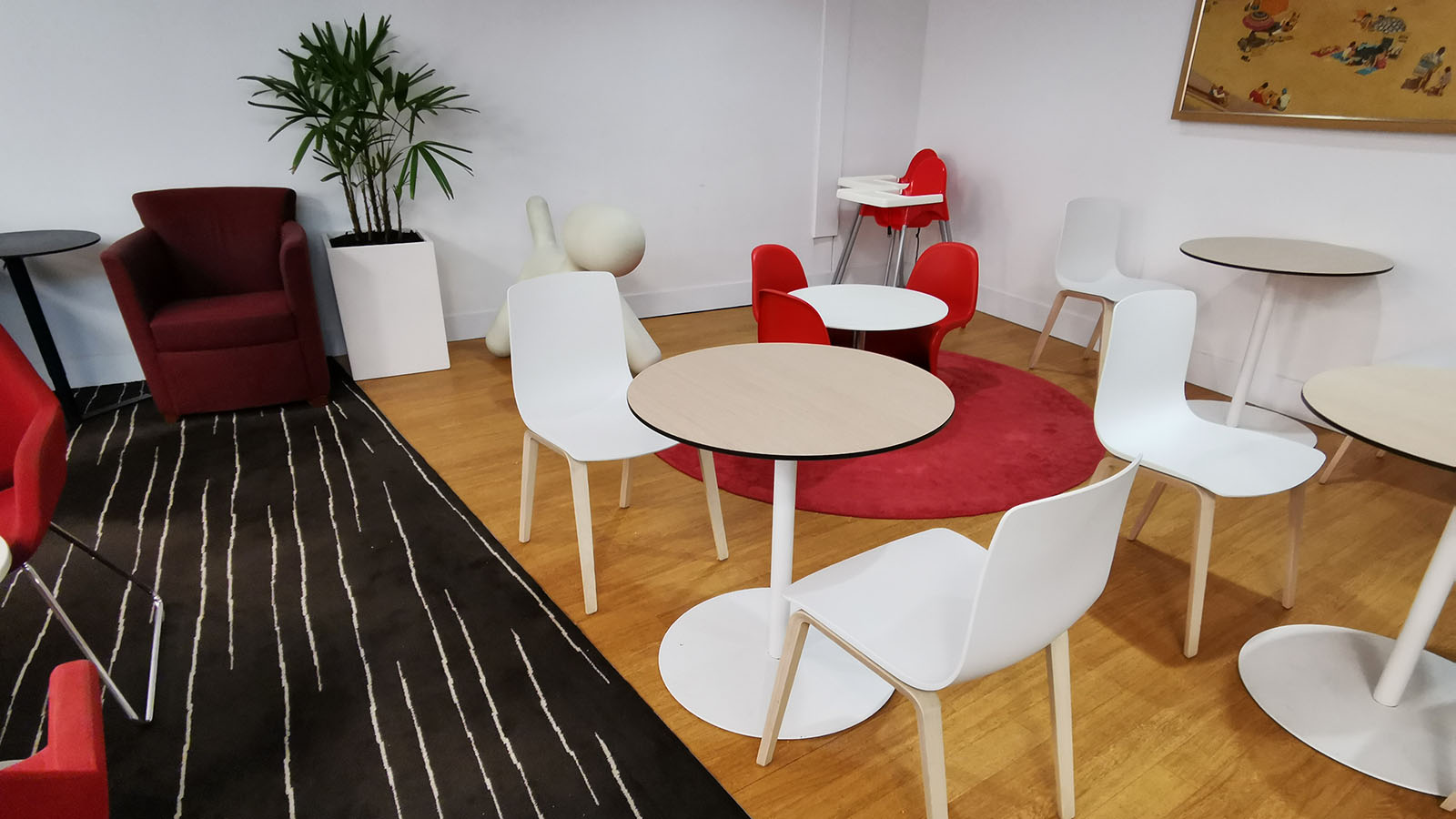 A very small Joey Club area sits in the corner, with adult-sized chairs nearby for supervision. 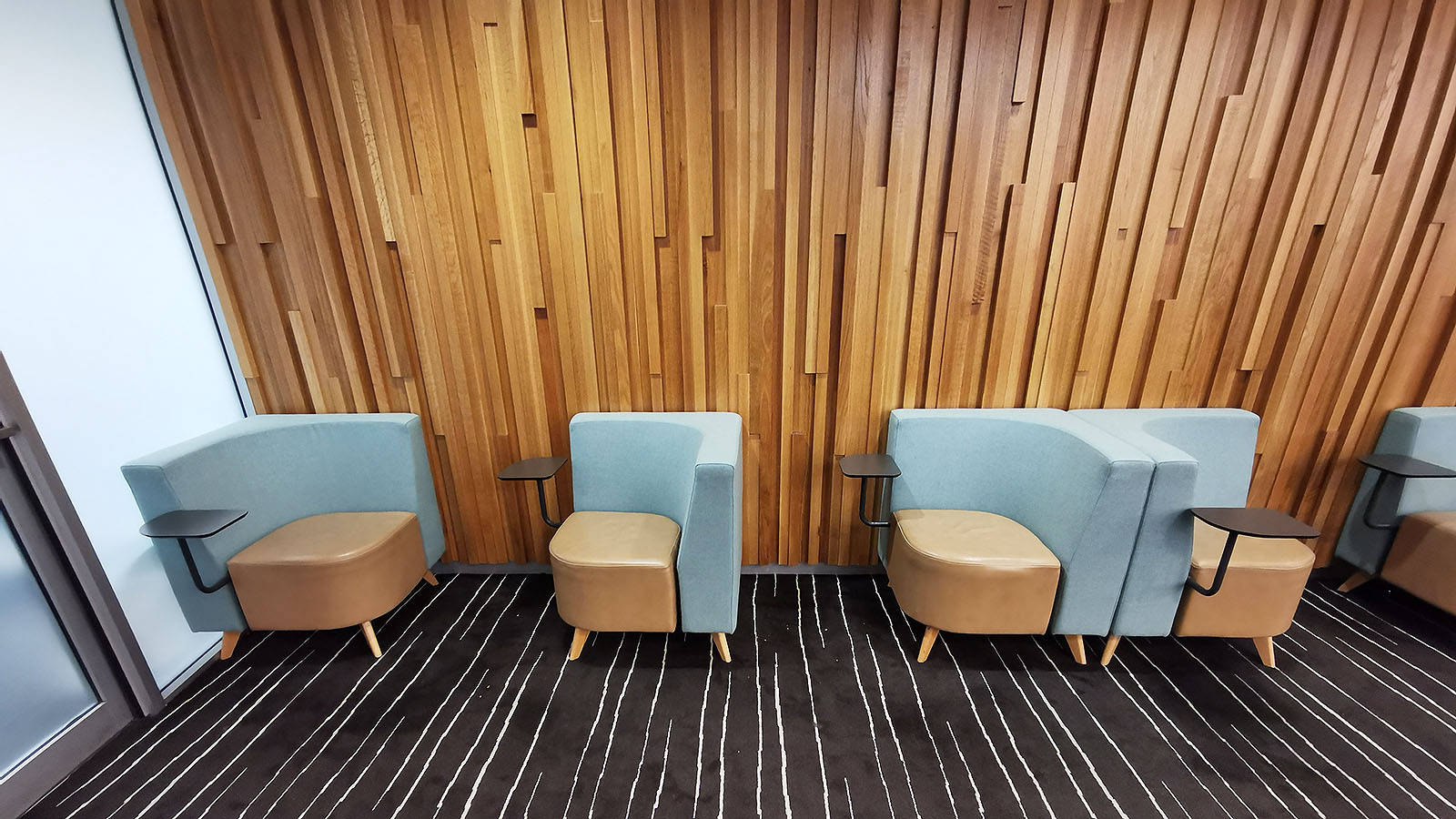 This wing looks and feels more ‘Gold Coast’, with blues and browns drawing inspiration from the beach. Need to get some work done pre-flight? You’ll find several working benches throughout the space. 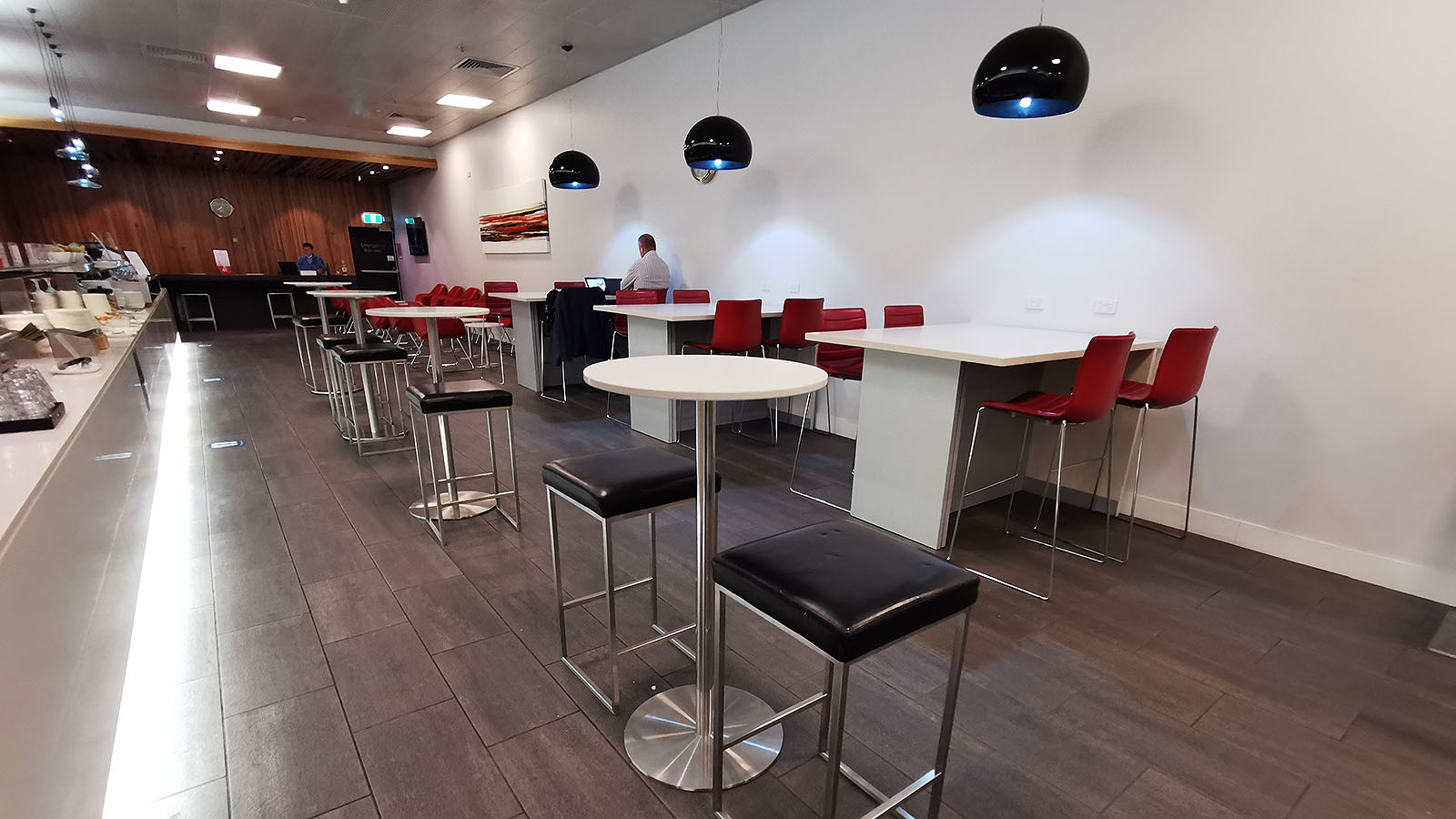 These seats are great for a quick pit stop. If in need of a quieter place, you’re less likely to be disturbed down at this end.

Pops of blue against a brown backdrop give the lounge a local feel, drawing inspiration from the Gold Coast’s iconic beaches. Other parts of the space instead reflect the more standard Qantas Club design.

Separate to the main space, there’s also a private meeting room tucked away. 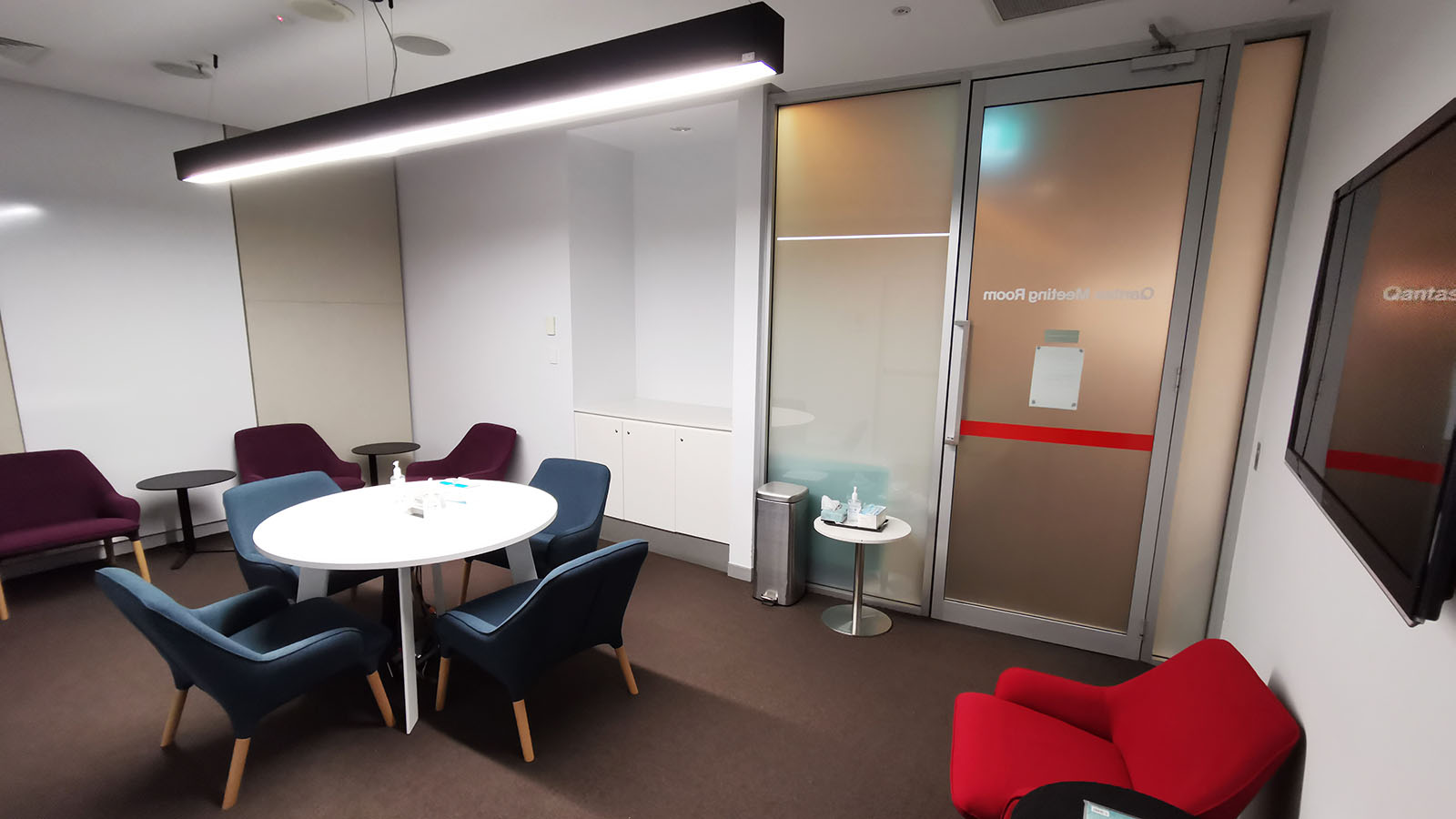 Without a Gold Coast Chairman’s Lounge, this meeting room is the next-best thing. At very busy times, this room can also be used for additional seating. But when you have the room to yourself, it’s a great place to get things done.

Prior to the pandemic, Qantas would allow travellers to book – and pay for – these spaces. But now, this area serves as a ‘VIP lounge’ as needed, or can be left open to provide additional seating during peak times.

Of course, while Qantas has a private Chairman’s Lounge at Brisbane Airport, it doesn’t offer the same at Coolangatta. That’s where the meeting room comes into play, as a welcome escape for those in the public eye.

Food and beverage in the Gold Coast Qantas Club

With buffets back in Queensland, food at the Gold Coast Qantas Club is all self-service. To kickstart your day, expect staples like fresh fruit salads, yoghurts and muesli. This morning tea-time visit also finds bites such as green tea tiramisu and baked hot cross buns.

Hot options during the morning can include croissants and frittatas – and of course, there’s all-day barista coffee. Some beverages like soft drinks and water are self-service, although the DIY coffee machine directs you to the barista counter instead. 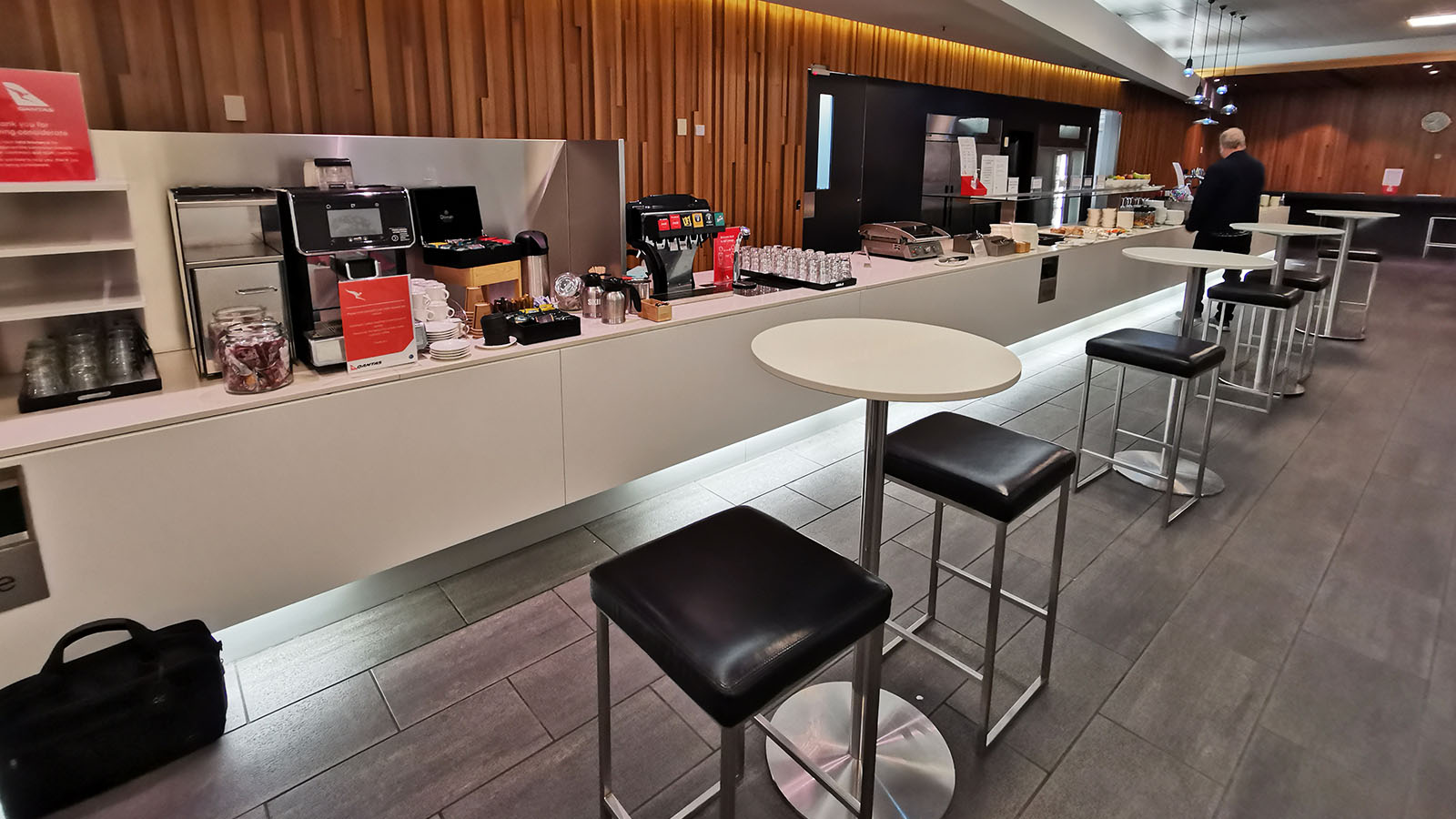 Head to the service counter for all food and drinks. 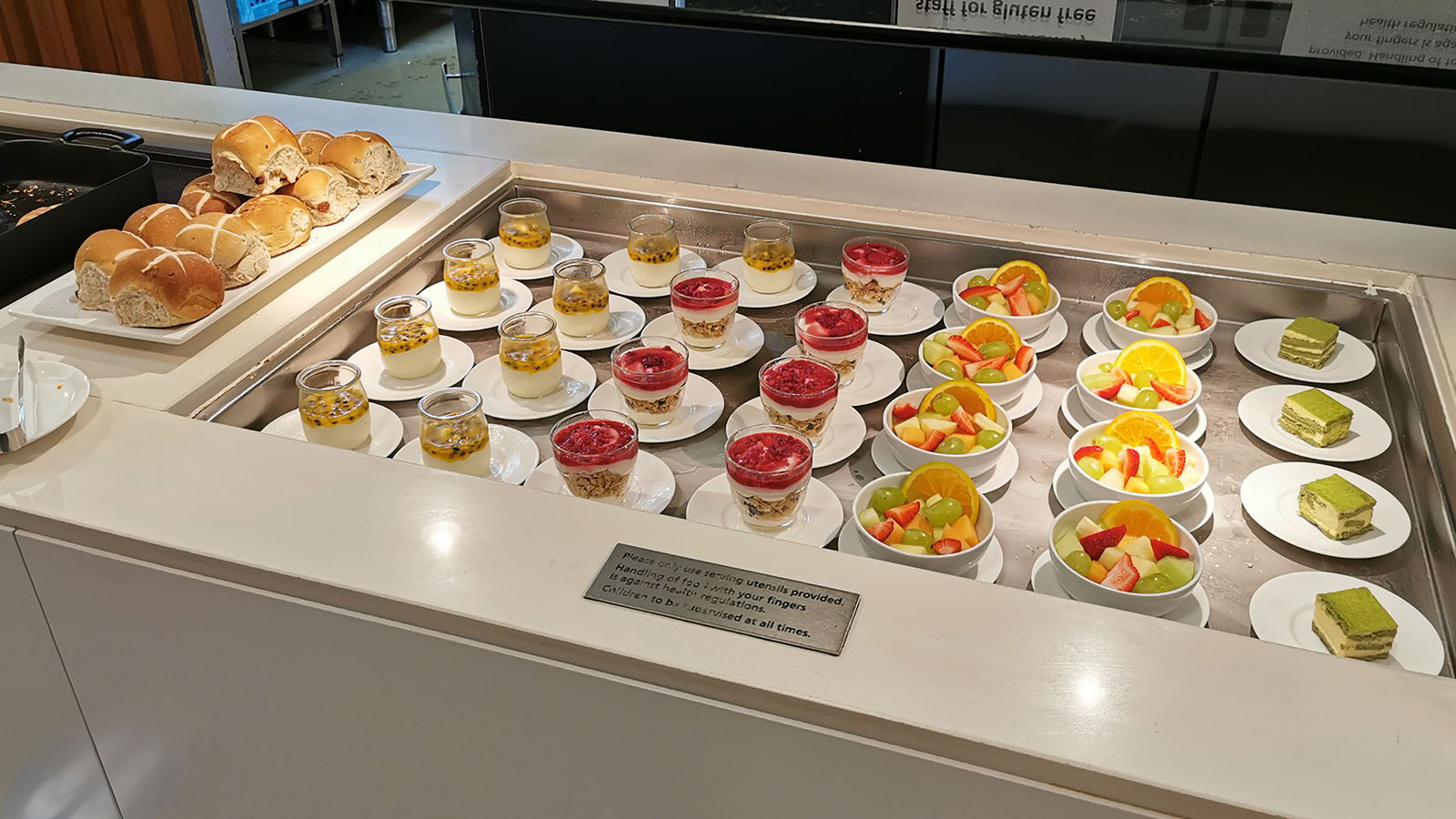 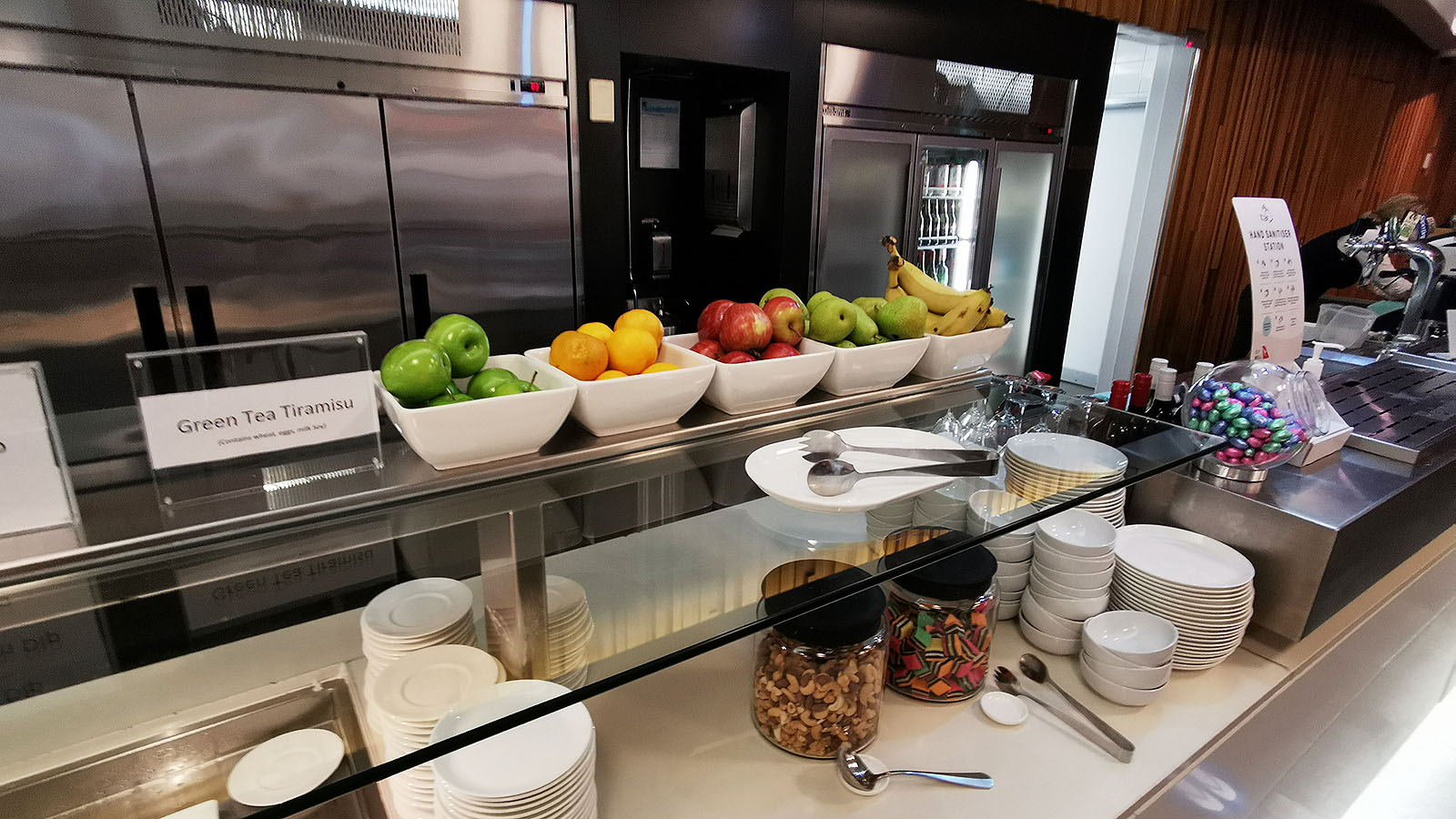 You’ll find fruit at the ready, too. 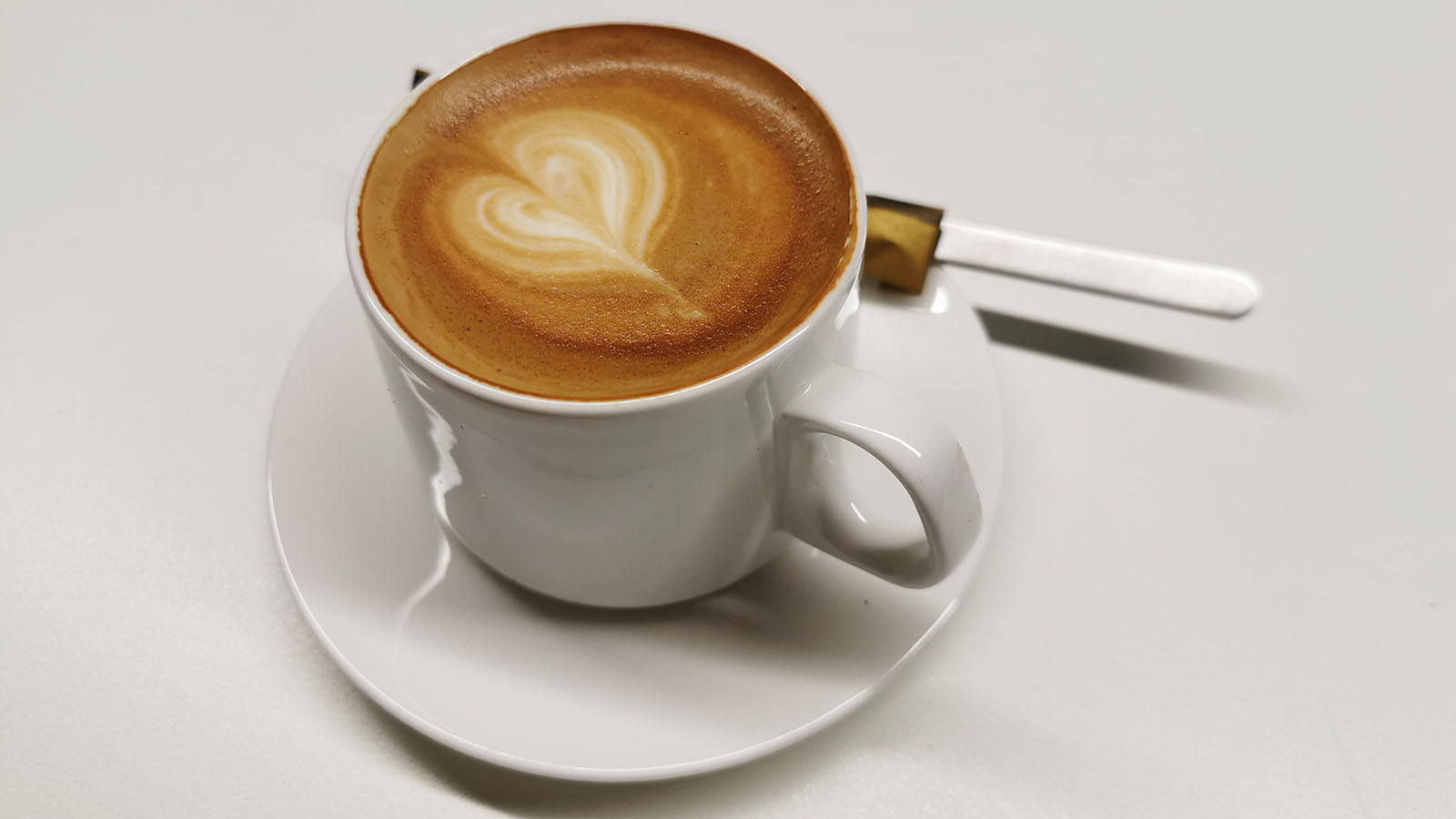 This includes barista-made coffee, which is available all day. 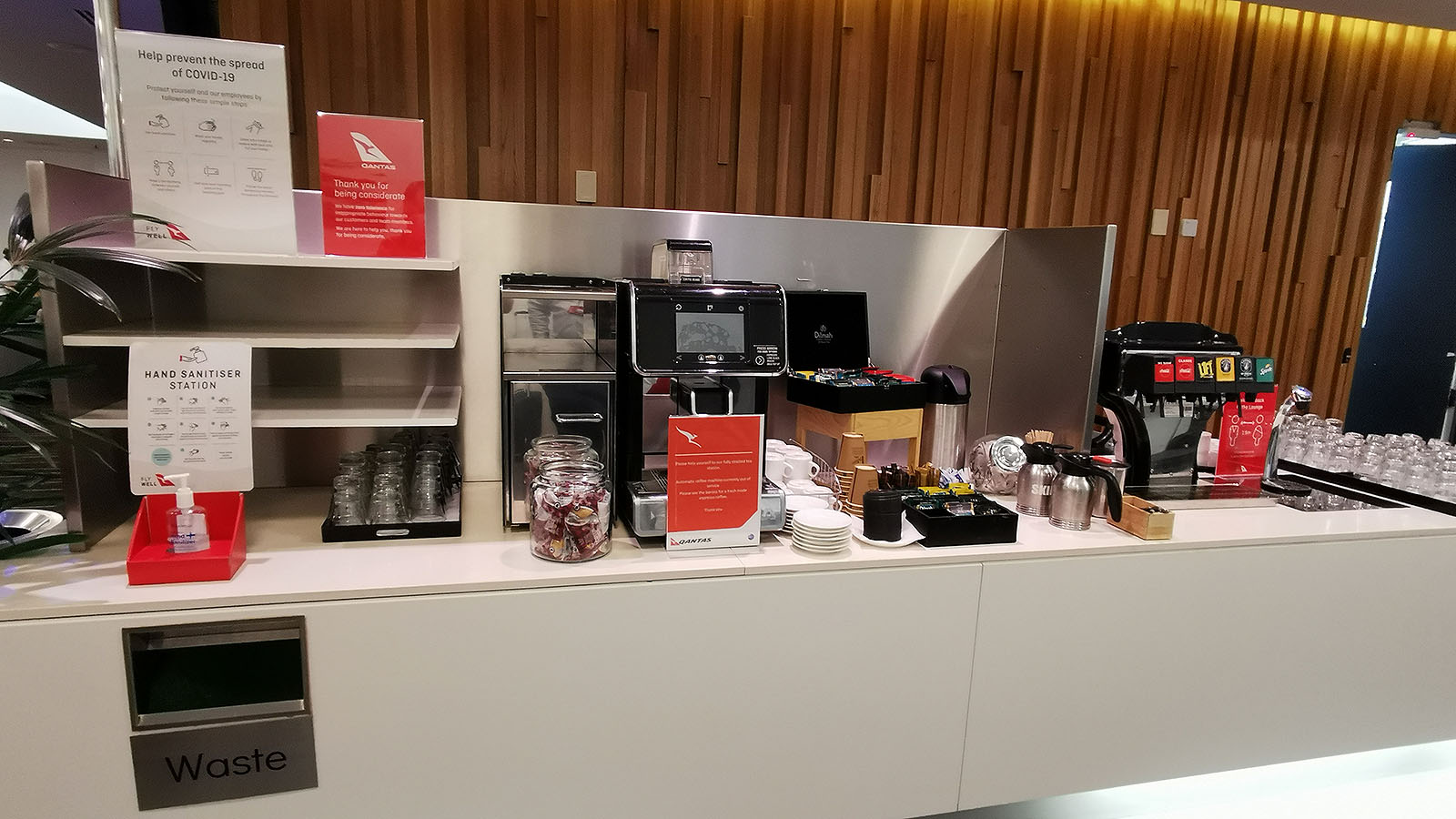 For now, the self-serve coffee machine is closed. But who needs that with the barista on standby? After breakfast, tuck into an array of fresh bites. The pesto penne pasta is a tasty snack or a light lunch. For something more substantial, you’ll find hot options for lunch and dinner. The chicken skewers with rice really hit the spot ahead of a long trip. Once you’re into the ‘pm’, you can get into the wine, beer or spirits.

Hot lunch options typically appear from around 1 pm. On this visit, that’s a tasty serve of chicken skewers with jasmine rice. Bar service is available from noon, with beer, wine and spirits at hand.

With both domestic and international flights under one roof at Gold Coast Airport, the Qantas Club offers several shower suites. These are open and available to all guests – just visit reception to collect a towel pack.

The bright blue mood lighting in the corridor is very much on-brand with the oneworld Alliance, whether by design or not, of which Qantas is a member. It also reminds me of several British Airways lounges: BA also being under that same umbrella. 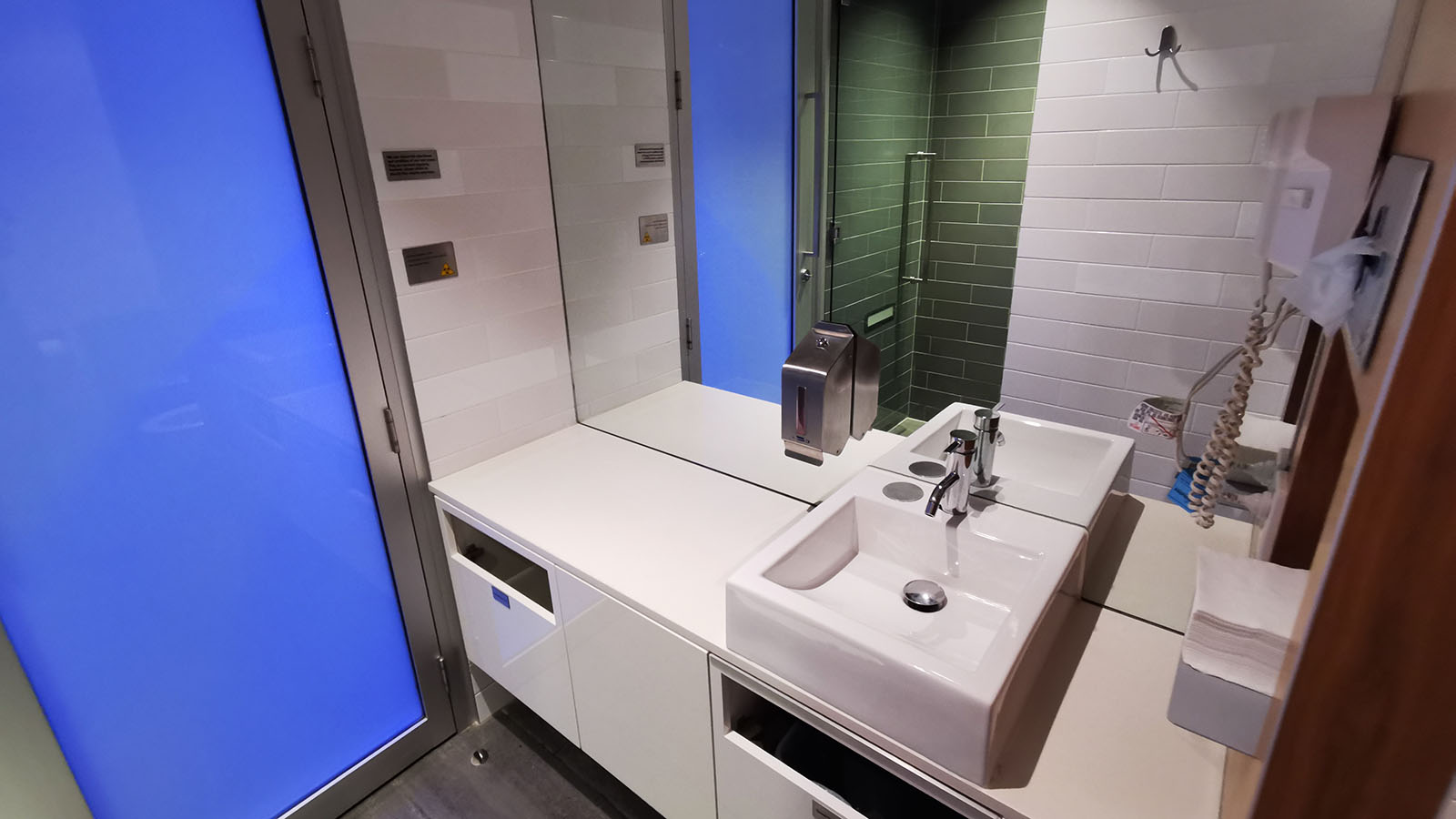 You’ll just need to ask reception for a towel pack. There’s a single pump dispensing what doubles as shampoo and shower gel. Sadly, no conditioner here. Pick up a Qantas magazine to read in the lounge or after you depart.

Closer to the reception desk, a counter keeps the Qantas inflight magazine in stock. Pick one up and it’s yours to keep.

Free Wi-Fi blankets the lounge, with the speeds perfectly usable. On this visit, downloads clock in at 32.3Mbps, with uploads at 26.7Mbps. That’s fast enough for video streaming, conference calls and more.

Gold Coast Airport runs both domestic and international flights from a single terminal. That makes this Qantas Club the go-to lounge for travellers jetting across Australia and abroad.

With that in mind, the rules here differ slightly from most other Qantas Clubs. Here’s the complete list of who makes the cut.

The Qantas Club at Gold Coast Airport wears many hats. For some travellers, it’s their pre-flight coffee stop before a quick domestic hop. For others, it’s the beginning of a journey abroad, and all the excitement that brings.

While the lounge doesn’t have any internal windows, its design makes good use of the available space. In some places, this can make it feel a little crowded. But when the alternative would be fewer seats and restrictions on access, Qantas has arguably struck the right balance.

It’ll be interesting to see how things progress when the airport’s expanded terminal opens to passengers. Particularly, whether this could provide Qantas with a larger lounge space elsewhere, to cater for growing travel demand in the region, and internationally.