Can points really get you and your backpack around the world? Yes, they can – and it’s not even hard.

I’m going to use myself as an example to show you just how easy and worthwhile this is. I’m a backpacker. I live on cheap street food, I couch surf, and I stay in vibrant but very cheap hostels. I’m currently in Latin America, and I spent next to nothing on flights to get here, thanks to frequent flyer points.

I started earning and using points in earnest a little over a year ago. In the eight months I spent saving up for my trip, I scored myself over 235,000 points – more than enough to cover all of my flights for the next year and a bit.

Getting started: how I saved up

Like many backpackers, I quit my job to see the world. But I was in full-time employment before my trip, and with a bit of research, I found a couple of credit cards to use and build up a nice stash of points.

Like anything related to credit and finance, you’ve got to do your own research and figure out what the right products for your own circumstances are, rather than just trying to copy someone else. A good place to start is the Point Hacks series on understanding your credit score.

For myself, I found and used three different credit cards that matched my income threshold and had minimum spends I could reach.

I collected both Qantas and Velocity points, because each airline has a different network of partners that I can use in different parts of the world. I also landed a few extra perks, like a domestic flight and some lounge passes – score!

Fellow backpackers, you might not have been into an airport lounge before, so let me spell it out for you in terms you’ll understand: free food and alcohol. Lounge passes aren’t really something that should sway your decision on which card to get. But every so often, a free glass of wine or three goes down very nicely.

As a young single person trying to save every cent for my trip, the most complex requirement seemed to be making the minimum spend of the cards I decided to apply for.

The thing is, while signup bonuses are used by banks to help get you in the door – and you score a bunch of points – banks actually do want you to use their cards.

This means the sign-on bonus usually won’t be available until you’ve met a minimum level of activity – often a minimum spend threshold within a certain time period. This can vary – offers I’ve seen have varied from the quite achievable $1000 within three months, to the much harder to achieve $5000 within one month. If you don’t make the minimum spend, you won’t receive the bonus points, so it’s important to factor this into your card choice.

These minimum spends can seem daunting, especially when you’re trying to save up for your trip. But I realised something very important about the minimum spend.

The spending needs to be on your card, but doesn’t have to be for you.

I began to use my friends and family to help me make my minimum spend. Whenever there was something to be bought, it went on my credit card, and my friends transferred the money back to my bank account. Every little bit adds up, and those minimum spends ended up being reached easily.

I lucked out one time when one of my new credit cards arrived the day before I went to a travel agent with my sister, who booked a few thousand dollars worth of flights and group tours. ‘Can you pay for it with this?’ I asked, holding up my new card. She transferred me the money, and paid on my new card. I made that minimum spend in one transaction.

So how much did I save on flights?

I’ve been aiming for Latin America for a while now, and since I didn’t like the idea of being in the Andes in winter I decided to start in the north and head south.

Mexico, I decided, would be my first stop, and I could use my points with partner airlines for other trips within the continent as I needed them.

Here’s a quick round-up of how I spent my points:

I booked the first leg of my trip from Canberra to Puerto Vallarta, Mexico via Sydney and Los Angeles. A quick search suggests that an economy seat on this route should set me back about $1400.

Just $330 to get from Canberra all the way to Mexico!

A few months into my trip – once winter had passed! – I decided to head from sunny Central America down to Buenos Aires, Argentina. And again, I used my stash of points to get there.

A cheap Economy flight from where I was in San Jose, Costa Rica to Buenos Aires, Argentina should be about $1100 outright. Ouch.

Instead, I grabbed a quick flight on a discount airline back to Mexico City for about $120. From there, I was able to use airline partner alliances to get where I wanted to go. I redeemed 32,000 of my Qantas points for an American Airlines flight to get down to Buenos Aires via Miami. I paid $66 USD for the fees and taxes on that flight, so all up I paid about $206 AUD for my flights.

(I also landed a neat extra perk that saved me a couple of extra dollars. When I booked through the rewards program, Qantas sent me a $30 voucher for Qantas Hotels. I think they hoped I’d put it towards a nice, $100+ a night hotel. But since there was no minimum spend on the voucher, I found a great $27/night place instead. Free accommodation!)

But what really matters here is not the precise dollar value I extracted per point. That’s interesting, but for me it’s not so relevant. What matters is that I got exactly where I wanted to go, and spent very little getting there. 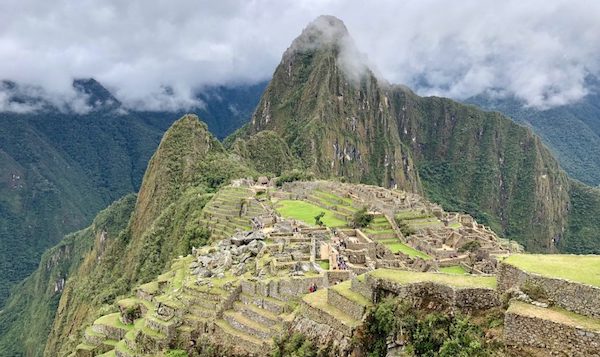 I also used another little trick to squeeze a bit of extra value from my points.

You might have noticed above that I paid the fees and taxes for my flights. On both occasions, I had the option of paying the full fare in points, which would have saved me a few more dollars and cost me a few thousand more points. But as a backpacker, I value my points in kilometres, and I want to keep them.

On their own, a few thousand points might seem to only be worth a short domestic flight, but when you add them to your stash they actually increase in value. A few thousand saved points can be the difference between having enough points for my next long-haul flight or having to pay the full fare, and when you care about kilometres covered, that’s the part that matters.

I also used routing rules for points flights to maximise the value of my redemption and fly from Canberra to Sydney for free as part of my international ticket.

As someone who doesn’t live near a major international airport, I used to always face the same dilemma when I travelled internationally – fork out the extra for the flight to Sydney the morning of my departure, or fork out the extra for the bus up the night before, a night at a hostel in the city, and the train to the airport the morning of my flight. Either way you look at it, it adds up.

But when I booked with points, I simply added the Canberra to Sydney leg to my international itinerary for free – perfect! It’s a hundred times easier than the bus-hostel-train option, and a hundred times cheaper than paying for the flight outright. That alone saved me at least another $100 (which, if you were wondering, is an extra 12 nights in the $8 hostel).

Next, head on over to Part III, where we’ll delve into for some practical tips to get going, and some more detail on how backpackers can squeeze maximum value from their points.

Martina is a freelancer writer, backpacker and world traveller set on seeing as much of the world as possible. Her writing has appeared on sites such as The Huffington Post and Add to Life, and she spends her spare time hiking volcanos and scuba diving. See what she’s been up to at www.martinainmotion.com or follow her on Instagram @martinainmotion.

Earning and using points effectively as a backpacker: why budget travellers should understand points

Practical tips for earning and using points as a backpacker