There are at least two seats open in Business Class on American Airlines flights from Los Angeles to Sydney and Auckland in May-June next year, as well as Singapore Airlines flights between Seoul-San Francisco, Houston-Moscow and Barcelona-Sao Paulo. But act quick! Business Class on the American Airlines 777-300ER and 787 Dreamliner 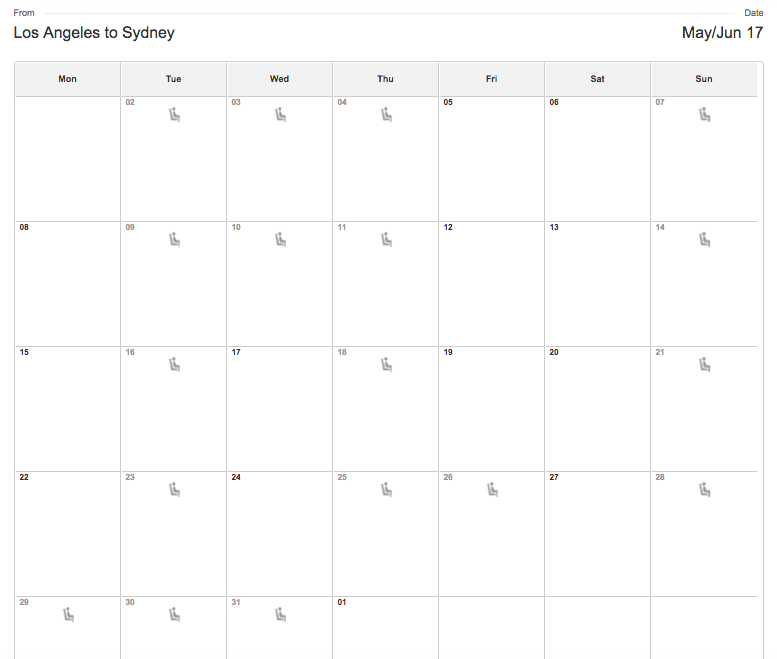 Price: 70,000 Asia Miles, 80,000 AAdvantage miles (you can tack on a Business Class trip from anywhere in the 48 states to LA and/or onward from Sydney to another Australian city for free) or 96,000 Qantas points (add 16,000 more from Perth)
Aircraft: AA flies a Boeing 777-300ER on the Sydney-LA route (avoid rows 5 and 11 which have no window) and a 787 Dreamliner on the Auckland-LA route. Both aircraft have a reverse herringbone 1-2-1 Business Class configuration, allowing direct aisle access. The difference between herringbone and reverse herringbone is that the former has your feet pointing towards the aisle, with the latter having them directed towards the window, allowing for more privacy
Notes: there is very little availability on the outbound Sydney/Auckland-LA flights. I could only find two Business Class seats on 28 April

How to search for and book American Airlines award flights

The easiest way to search for an award flight on AA is to go to their website at aa.com and do a search with the ‘Redeem Miles’ function. Open up the one-month calendar and look for Saver Award level. You can then book online using your AAdvantage miles.

If you want to book using Asia Miles, fill out this form.

And if using Qantas points, you can book online by doing a Classic Flight Rewards search.

As we wrote about last week, Singapore Airlines has some route changes coming into effect across its network from late October, and has consequently opened up award space on three of the soon-to-be-discontinued routes.

All are operated on Boeing 777-300ERs, with Seoul-San Francisco featuring the new cabin and the other two routes operating with the older Business Class cabin.

Between Seoul and San Francisco Between Houston and Moscow on Singapore Airlines Between Barcelona and Sao Paulo on Singapore Airlines

Seats: 2 (up to six in final week of flight) Business Class seats
Dates: most days in October until final flight on 20 October
Price: 50,150 KrisFlyer miles
Aircraft: older three-class 777-300ER
Notes: there are no fuel surcharges on flights departing Brazil

How to search for and book Singapore Airlines award flights

Log in to your KrisFlyer account and tick the ‘Redeem award flights’ checkbox to do your search.

We have a guide on how to search for award space on not only AA and Singapore but other airlines too.

Award space on direct flights between Australia/NZ and the US can be notoriously difficult to find, so the opening of some seats on the return leg on AA in May-June next year (a great time to visit the US) is a good opportunity. For the way over, you could consider redeeming points to fly via Asia.

For the three Singapore Airlines flights to be discontinued, if you have 50,000-70,000 KrisFlyer miles lying around and can travel at short notice, there are good opportunities to fly over the next two months in Singapore Airlines’ acclaimed Business Class.

How to efficiently search for reward seats