How to use your Qantas First Lounge Invitation, and a list of Australian domestic departures from Sydney & Melbourne International Terminals

Qantas recently gave out International First Class Lounge invites to many of Gold & Platinum Frequent Flyers by way of an apology for the disruptions caused by strike (and strike mitigation) action at the tail end of last year. Mine arrived back in December, and I’ve been pondering how to use it over the last few weeks.

The pass is valid for the Sydney or Melbourne International First Lounges until the end of 2012, so I have a while to use it – but I want to be sure I get the best value. Given I have no international trips booked on Qantas in the next 12 months (although something normally comes up), I’d like to be sure I get use out of the voucher as I think hanging out in the First Class lounge should be a pretty nice experience – something only possible if you travel enough to be a Platinum Frequent Flyer, or are actually travelling in First. I thought it might be useful to research the options and detail them here. You’ll need to hold a Qantas or Jetstar boarding pass, and be travelling through the International terminals of either Sydney or Melbourne. The upshot is you’ll have to have travel booked in one of the following scenarios:

There’s a handful of scheduled flights operated by Qantas & Jetstar which leave from International Terminals (normally because they have either arrived from or are eventually departing to an international destination.) For most of these it’s possible to buy just the domestic portion of the ticket, meaning you can take a (relatively) inexpensive day or weekend trip, and use your First Lounge invitation at the same time.

These are the flights I’d look at, in order of latest departure time (which should equal maximum First Lounge enjoyment).
Flight details are correct at the time of publication, January 2012.

Qantas & Jetstar fly to a heap of International Destinations, but for the purpose of this exercise, I’m considering the easiest/shortest/cheapest routes to book.

The most probable cheapest option would be to pick up a Jetstar Trans Tasman flight from either Sydney or Melbourne over to New Zealand, followed by a Qantas flight to do the same. The frequency of departures should allow you to pick and choose what time of day and how long you spend in the First Lounge with ease.

Alternatively, a little further afield are Qantas codeshare flights with Air Vanuatu to Port Vila, Vanuatu; Air Pacific to Nadi, Fiji; or with AirCalin to Nouméa, New Caledonia (from Sydney only). These are obviously more involved and expensive destinations than a quick domestic hop, but are Qantas’ closest codeshare/international destinations from Sydney and Melbourne. 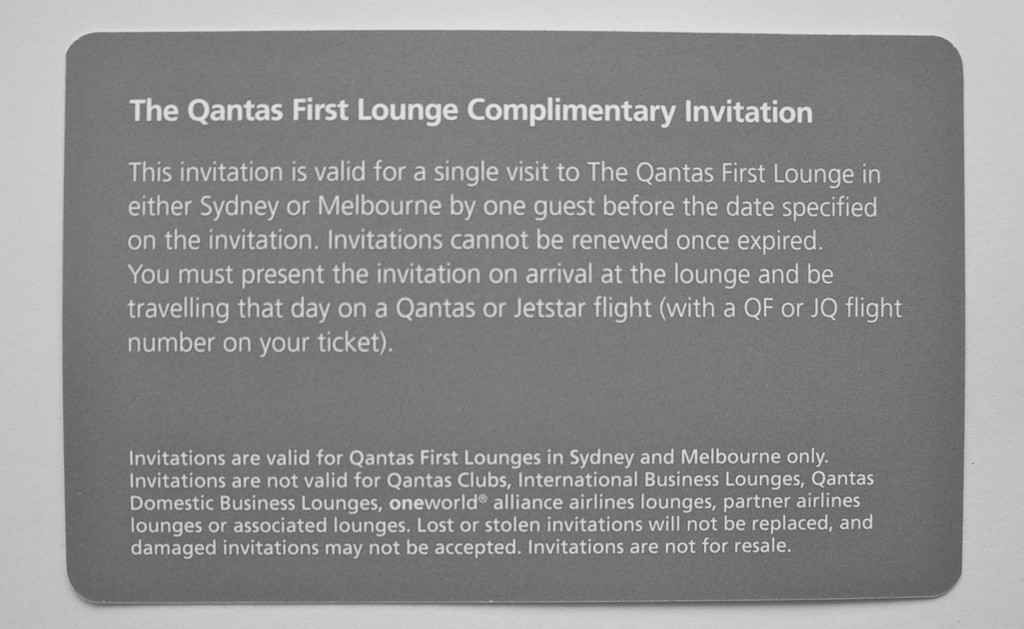 I’ll be waiting a couple of months to see if any travel plans crop up that suit me using the pass without booking anything specific. If it’s not looking promising, I’ll probably jump on either JQ35 from Sydney to Melbourne, allowing a late morning and lunch in the lounge, or similarly on JQ3 from Melbourne to Sydney. Either way, can’t wait to try one of them out.

How to use your Qantas First Lounge Invitation, and a list of Australian domestic departures from Sydney & Melbourne International Terminals was last modified: November 12th, 2013 by Keith