A friend of mine called me over the weekend to ask for some help with using some of his points for a flight to Venice. They have around 400,000 Qantas points to burn, yet couldn’t find availability that worked with them to suit their preferences (2 adults travelling with a small child), dates and to their budget.

I figured this was a common story, so I decided to document my research and turn into a quick summary of my methodology when I start looking into using points for a complex itinerary.

There a handful of stages I work through to end up feeling comfortable that I’ve looked into as many options as possible, and ultimately (hopefully) with the right outcome – finding the right seats, on the best available route and flights, on the most appropriate dates and time.

He was looking to fly to Europe in the first week of January, which is typically the busiest time of year to find seats – even though we are looking 6 months out. The return is the first week of February, which should be much more available. So I knew the outbound flight would be a challenge.

I’ll run through the tools and techniques I use, along with the outcome I came to. Feel free to chip in let me know how you would do the same!

There are a few parts to this process.

The first is understanding what points currency (or currencies) you’re working with – in this case Qantas points – and therefore what they can be redeemed for – in this case oneworld partner airlines, plus Emirates.

Secondly, I then work through the potential best route combinations. The most direct route in this case is with the Qantas & Emirates partnership, Sydney -> Dubai -> Venice. However, I also consider the other partner airlines on offer that can offer a two stop itinerary, so for Venice, that’s:

Most of these I know of because I’m an airline nerd and I have an understanding of which airlines fly where. However, the Qatar example is a great way to demonstrate how I ensure I haven’t missed a trick – and how I love Google’s flight search tool.

Searching for ‘Venice Flights’ in Google leads you to an embedded info panel in the search flights. You can also use IATA airport codes – so ‘VCE flights’ – as the search term. 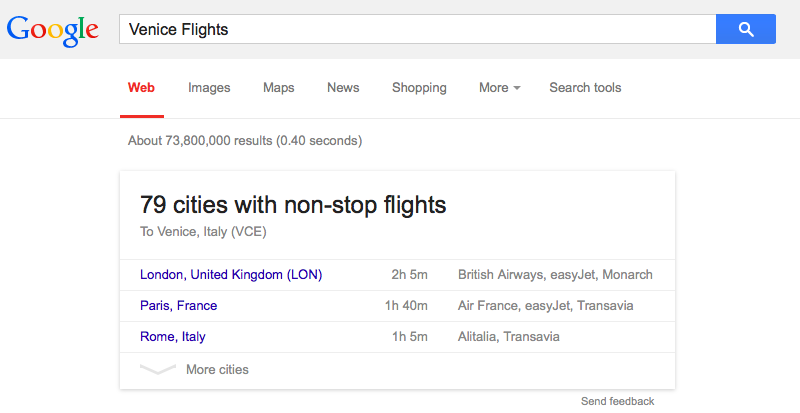 Opening up that ‘more flights’ panel shows a full list of cities with direct flights from Venice. This is where I spotted the Qatar airways option, and I know that Qatar fly direct to Melbourne from Doha and is a oneworld member airline – so an option I would have otherwise missed.

The last piece is then knowing how far your points are likely to get you. In this case 400,000 points will be enough for the simplest itinerary as an Economy return – at 128,000 points return, per person, on the most simple routing of Sydney -> Dubai -> Venice with Emirates in Economy.

If I can find availability for this route then that would be ‘problem solved’, but my friend would likely have done that himself. So I know I need to try and find the next best option.

As I outlined, it’s worth looking at the most direct option with Qantas and Emirates first, so Sydney -> Dubai -> Venice.

However he had already been told there’s no availability (and unfortunately not surprising over the summer / winter holidays), initially, I thought it would be worth looking for 3 seats from Sydney to Dubai and return, where the Dubai – Venice leg could be tacked on with a paid flight.

The availability though to Dubai was not great, only one flight in Economy with the three seats needed, and connecting back through Melbourne.

This makes the most direct routing unlikely as a final option – though to be sure I also checked a Dubai -> Venice -> Dubai redemption, with the idea that they could buy their way Sydney -> Dubai -> Sydney.

Then research the more complex routes

All searches I did for Economy only given the points balance and wanting 3 seats, and also for flights that connect easily.

For Cathay Pacific, JAL or Malaysia Airlines via Paris – no availability in either direction.

There was a flight from London – Sydney on BA and Qantas on the 2nd February. Not a great connection (3.5 hours), but not too bad either. Taxes are likely to be high on this route though. 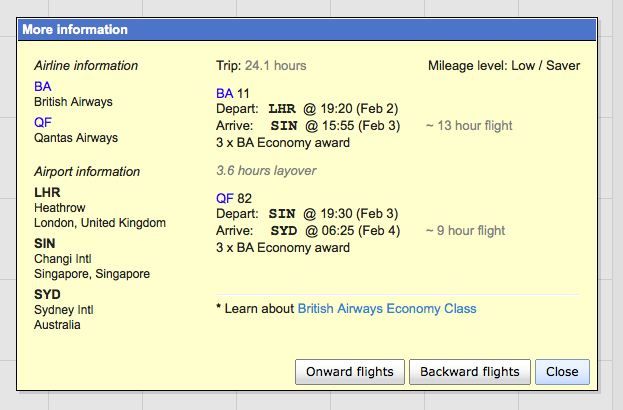 For Cathay Pacific to Milan – Nothing in either direction.

For Qatar Airways to Venice via Doha, departing Melbourne – There’s no outbound, but the return looks very handy – right dates, minimal connections – but a late arrival into Melbourne meaning they would need to find an airport hotel for the night at the least. For Malaysia Airlines to Amsterdam, no availability in either direction.

For Malaysia Airlines, Cathay Pacific or JAL to Frankfurt, nothing too.

So at this point, there’s Economy for the return only, either from London, or from Venice via Melbourne. However I still haven’t done any further research on mixed itineraries, i.e. flying points for half the route (to a mid-point and back), and paying cash the other…

Putting together a proposed itinerary

Now I narrowed down that there were those two one way options available for the return, I had a quick sanity check of paid one way fares to get over to Venice from Sydney. 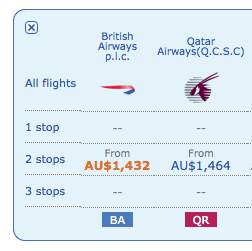 The advantage of the Qatar option is that the short haul flight is done first on the outbound, and then it’s a late departure out of Melbourne allowing for some rest.

With the British Airways option, you have to schlep through Heathrow and onward to Venice after the 23 hours from Sydney. With Qatar, they also price it $50 cheaper out of Sydney, including a connecting flight on Qantas, than out of Melbourne.

Below are the Qatar prices that were returned.

The reason I checked the cash fares for the one way outbound flight is that one way flights are often much more expensive than the return. Thankfully, in this case, it’s actually reasonable, so they could consider cash one way and points the other.

Now, back to the points bookings – I began to check the actual points and cash required.

The British Airways and Qantas mixed option came in at 80,000 points per person and £326.

The Qatar return option is priced at 75,000 points plus 226 EUR per person in Economy – however, on checking on Qantas.com it also showed there also happens to be three Business Class seats on that same flight (and I think finding three like this is likely to be as rare as hens teeth) at 139,000 points each, for a total of 417,000 points all in. The taxes aren’t too bad at around 300 EUR.

Now, we all know Business Class is always the best use of points, by far, in terms of value, so I would definitely recommend considering paying for the one way fare in Economy and using points in Business for the return.

The whole thing using Qatar in Economy on the way out and in Business on the way back would cost 417,000 points, plus 900 EUR taxes on the Frequent Flyer booking, plus $4,000. I don’t think that’s a bad use of these points, to be honest – although it may not have been exactly what they were aiming for (minimising expense).

Spoiler, there weren’t any other real options, but it’s worth checking.

Return flights to Asia can usually be had for under $1000 – so as I alluded to earlier, they could grab a paid return flight to Singapore, Hong Kong, Kuala Lumpur or Tokyo, and fly onward and back using points, depending on availability.

The balance of 400,000 points gave them a budget in this scenario of about 65,000-70,000 points per person, per leg, to work with, so they may be able to squeeze in Business Class or Premium Economy for the flights to and from Asia and Europe.

Hong Kong is the best to target to start with a search, as British Airways and Cathay Pacific both offer a good range of usable destinations to then travel onward to Venice. 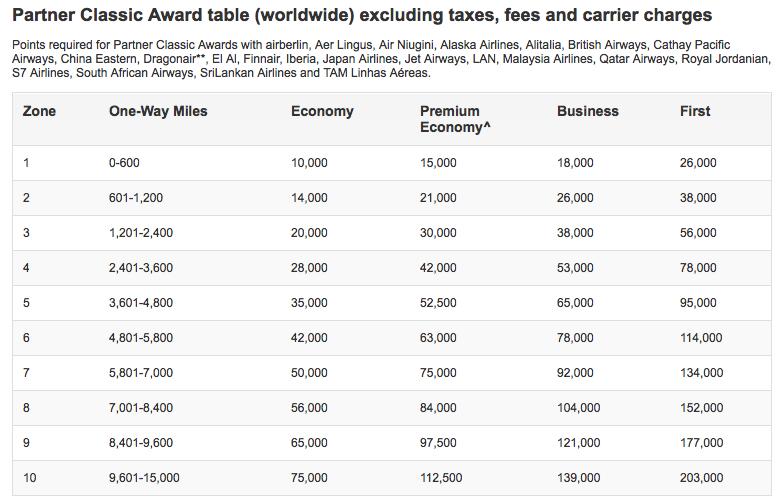 There just so happens to be availability for 3 Business Class seats on the Cathay Pacific flight returning from Frankfurt on the 29th Jan. Now this may be too early given their planned dates, but it’s well worth considering as Cathay’s Business Class is amazing.

So amazing, in fact, that it’s really hard to actually reach a child in their seat, but it’s only a bit of a problem for take off and landing. 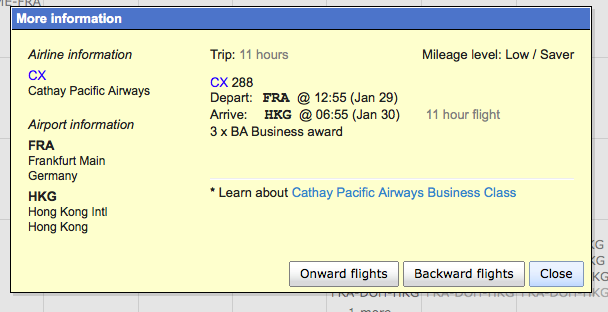 By comparison, there’s also availability for the return to Hong Kong from London, in Economy, Premium and Business Class, but it costs more in points and cash.

Unfortunately though for the outbound option from Asia, there’s no flight with 3 points seats from Hong Kong direct to anywhere in Europe (Paris, Frankfurt, London, Milan) for that first week in January, so I checked Singapore and Tokyo as well, in the hope there might be one – and there are a couple of options in Economy from Tokyo, only on British Airways. The flight from Qantas from Hong Kong back to Sydney is around $750 per person, but there are no cheap one way flights to Tokyo, they all come in at $1800+.

All up, the Qatar option seems like the best available at this point.

What they should do

So by this point, I’m now convinced the Qatar option to use your points for Business Class on the way back and to pay for Economy on the way out.

In my opinion, it seems to be:

Their biggest problem is flying to Europe the week after Christmas. If they were going the week later, I think it’s possible to do better.

The more astute of you may have noticed that this itinerary comes in at closer to 420,000 points, whereas their budget was 400,000. I offered to loan them the remainder with a family transfer, which by the letter of the Qantas terms and conditions isn’t allowed, but in practice transfers can be made up to 4 times per year.

Reminder of the Methodology:

How I find ways of using Qantas Points when there are no seats and all seems lost was last modified: November 24th, 2015 by Keith