Qantas on sale – great deals to Asia until March 5th

Qantas went on sale for their new Asian timetable overnight, and the deals are actually worth letting you know about in case you’re interested.

If you can score a sale fare for dates you want, $700 return in Economy to Singapore, or $3800 return Business Class to Hong Kong is about as good as a full service carrier will probably get on these routes.

Here’s a quick screenshot of the deals departing Sydney: 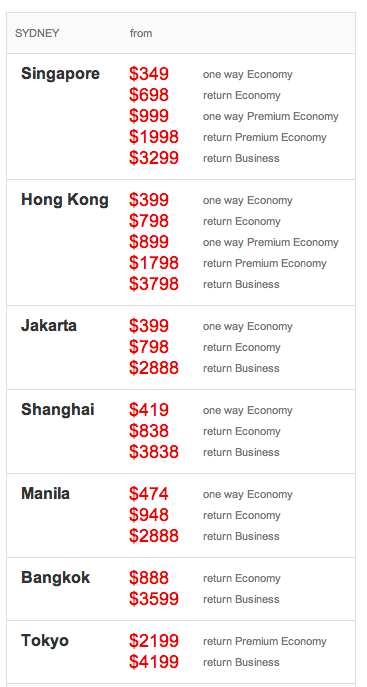 You may find Cathay Pacific, Singapore Airlines and such responding with sales in kind – let’s hope.

Normally I don’t write about general sales and such as I figure these will most likely make their way to you one way or another – if you’re interested in a specific destination / date you are probably checking in on fares regularly enough, and I imagine a large percentage of population gets them through email.