As tensions rise, the world's airlines adapt to the war in Ukraine by rerouting to avoid Russia.

As Russia closes its airspace to countries around the world, airlines are looking for new ways to jet from A to B. Even airlines not formally banned by Russia are avoiding Russian airspace, just to play things safe.

Here’s a look at how the conflict between Russia and Ukraine is impacting the flight paths of five major airlines popular with Australian travellers.

Our thoughts and hearts are with those impacted by the ongoing conflict in Ukraine.

Qantas’ flagship flights from Sydney and Melbourne to London currently run via Darwin. Between the Top End and the UK, the airline had been flying over Russia. But from February 27, Qantas shifted its flight paths south: not an easy task when you’re avoiding the airspace of the world’s largest country.

Unlike many carriers elsewhere, Australian airlines aren’t banned from flying over Russia. It’s instead a precautionary move by Qantas, and one that adds around an hour to the flight time in each direction – depending on wind and other factors.

Given the current circumstances and complexities, we’re opting to use one of our alternative flight paths that doesn’t overfly Russia while we continue to monitor this evolving situation. We regularly review our flight paths and make any ­adjustments we consider prudent. 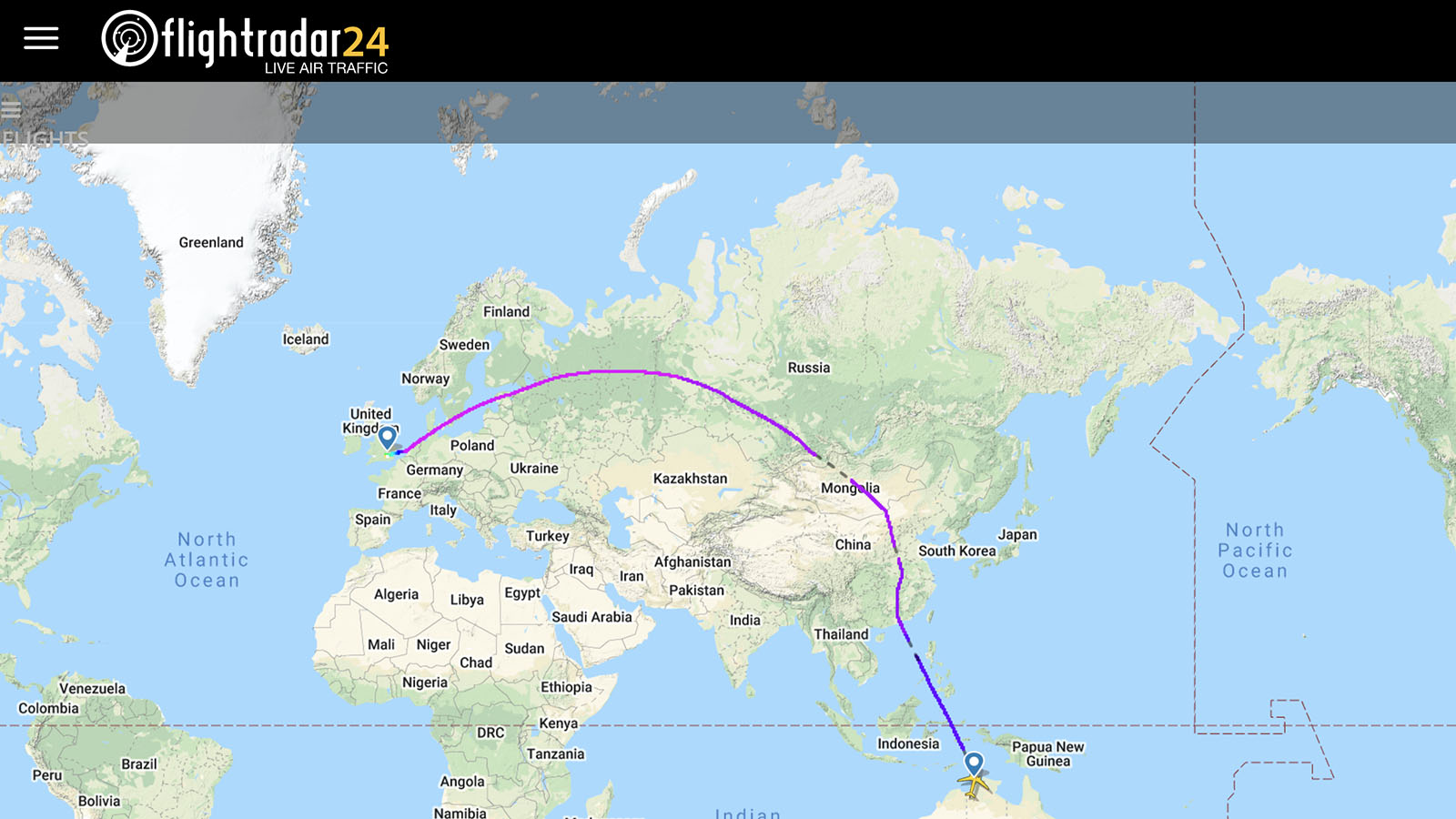 A common flight path previously used by QF1 and QF9 from Darwin to London, routing over Russia. [Courtesy Flightradar24] Before the shift, the non-stop hop from Darwin to London averaged around 16.5 hours. But now, QF1 and QF9 stretch to a marathon 17.5 hours, and sometimes even a touch longer. There’s a similar shift on routes back from London, where flights are again averaging around 60 minutes longer.

Rather than its previous path north over China, through Mongolia and across Russia, Qantas’ route now tracks northwest. That sees it flying across Singapore and India, up through the Persian Gulf, across Iraq and Turkey, and traversing continental Europe to the UK.

While changing flight paths brings a 60-minute inconvenience for Qantas, the decision to avoid Russian airspace is having a much bigger impact for Japan Airlines.

Until recently, JAL’s flights between Tokyo and London travelled almost entirely through Russia. This saw a typical service measure up at 11 hours 45 minutes from gate to gate. 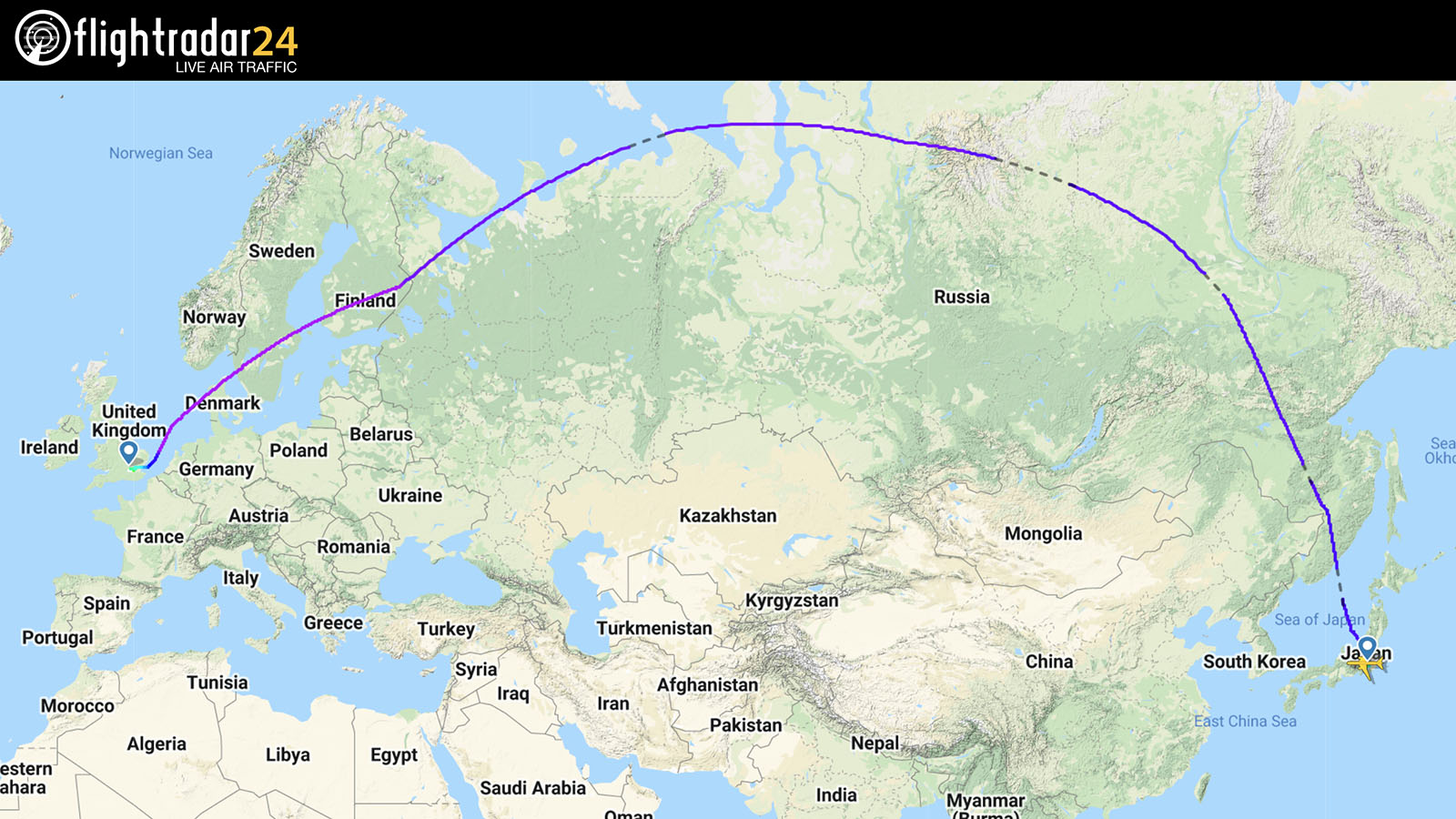 A typical flight from Tokyo to London spends most of its time over Russia. [Courtesy Flightradar24] But flying from Tokyo to London looks very different when Russian airspace is avoided. [Courtesy Flightradar24]

With Russia removed from the equation, JAL isn’t simply heading south on its London-bound flights – it’s flying in the opposite direction entirely. The new track northeast takes these flights over Alaska and Canada before arcing over Greenland and down over Iceland.

The time impost? Around three hours of extra flying in each direction. This pushes the journey time to almost 15 hours when bound for the UK. With global oil prices rising, flying large planes longer distances comes at a significant cost. To cover those expenses, we’re likely to see airfares rise across many major airlines.

Another popular option for Australians travelling to London, Singapore Airlines often used Russian airspace to reach the UK. However, Singapore’s location means that the time spent overflying Russia is usually far less than for carriers like JAL.

Having recently redirected its London flights southward, Singapore Airlines isn’t seeing much difference in the overall journey time on this route. A typical flight from Singapore to London would often use Russian airspace. [Courtesy Flightradar24] When Russian airspace is avoided, the impact on travel time is minimal in this case. [Courtesy Flightradar24]

Routing via Russia, recent flights clocked in at around 14 hours and 20 minutes. Changing the flight path has only extended that by 15 minutes on recent flights. Most passengers wouldn’t notice any difference.

Finnair, Singapore and Tokyo to Helsinki

With a hub in Helsinki and with Finland bordering Russia, Finnish airline Finnair is really feeling the impact of avoiding Russian airspace.

On its flights between Singapore and Helsinki, Finland’s flag carrier was previously able to fly west in around 11.5 hours. But with new flight paths avoiding not only Russia but also Ukraine, each flight now takes up to 14 hours. That’s 2-2.5 hours longer each way.

That presents problems for Finnair. Its network of destinations in Asia had been based on faster turnarounds, allowing one plane to operate out and back from Helsinki within 24 hours. This meant Finnair could offer daily flights on many routes without needing as large a fleet as some other airlines. 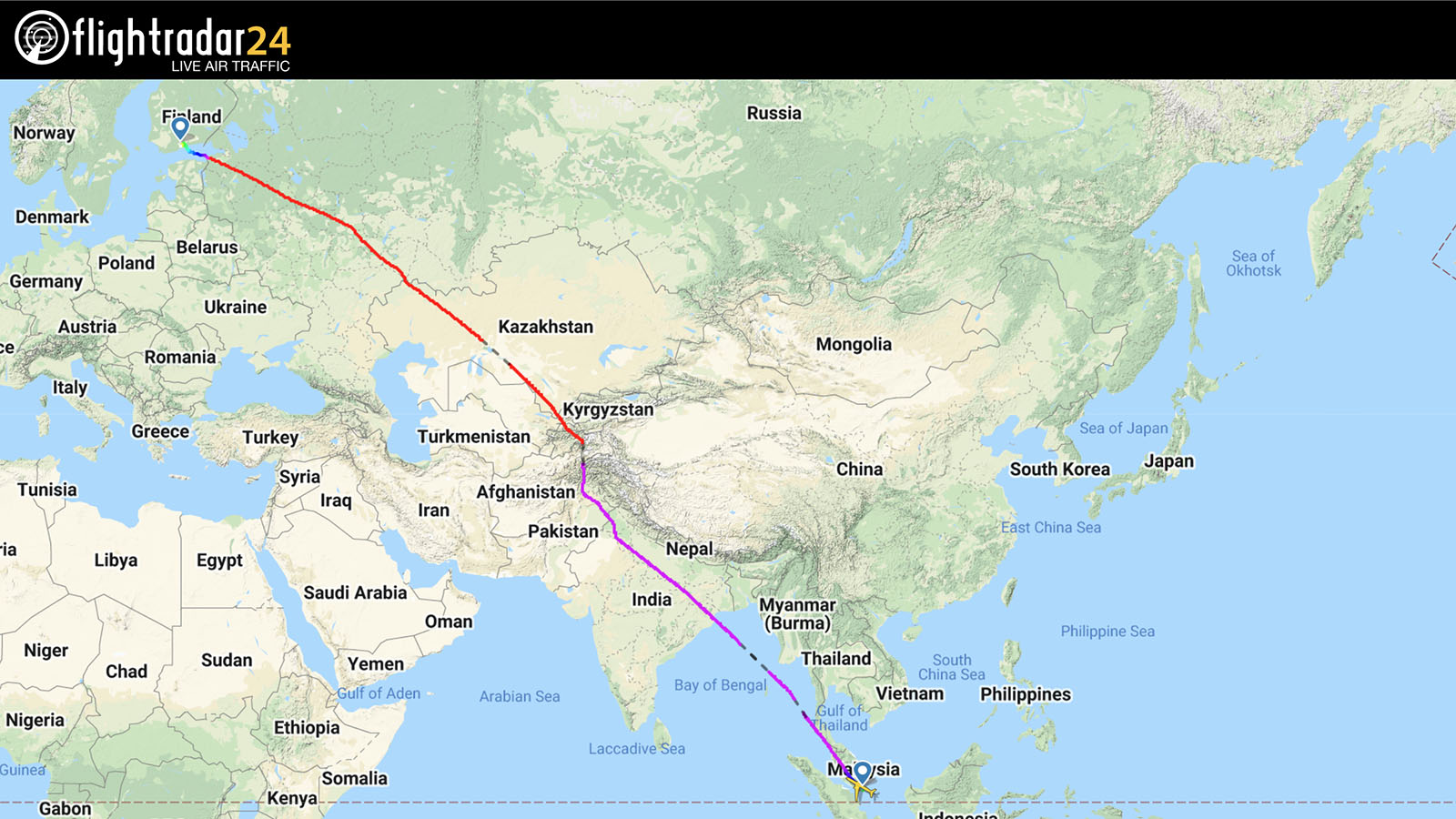 Flying through Russian airspace gave Finnair the most direct path between Singapore and Helsinki. [Courtesy Flightradar24] 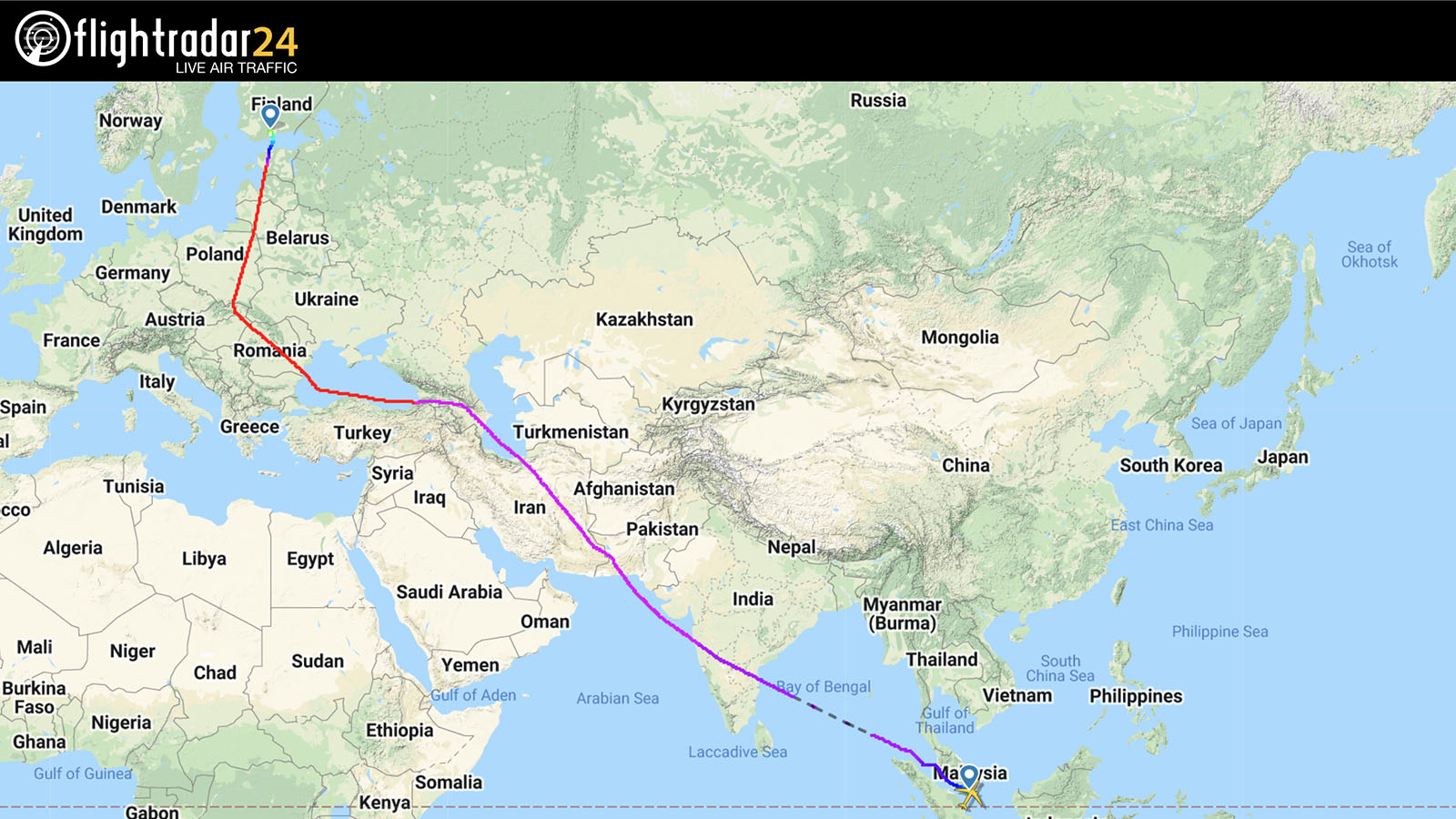 But with Russian airspace now being avoided, Finnair faces a much longer route. [Courtesy Flightradar24] Now with Russian airspace being avoided, flights between Tokyo and Helsinki take around four hours longer each way. [Courtesy Flightradar24]

Yet with Singapore-Helsinki services stretching to 14 hours each way, that’s 28 hours of flying per return trip. Add in the time each plane spends on the ground, and it becomes impossible to serve every destination at the frequency Finnair did before.

Flights between Tokyo and Helsinki are causing even bigger headaches. What took 9.5-10 hours before is now expected to take up to 13.5 hours. That’s an extra eight hours of flying on every return trip!

Japan is one of our most important markets, and we want to continue offering safe and reliable connections between Helsinki and Tokyo also in this situation. Japan is also an important cargo market, and air connections are needed to keep cargo moving.

Emirates is in an interesting position, with some – but not all – of the airline’s flights moving away from Russia.

One redirected southward is the airline’s Dubai-Stockholm service. What had been taking the airline 6-6.5 hours over Russia now takes 6.5-7 hours to avoid it. Given the need to avoid Ukraine too, Emirates’ flights make a curve above Turkey, then loop through Romania and Poland en route to Stockholm. 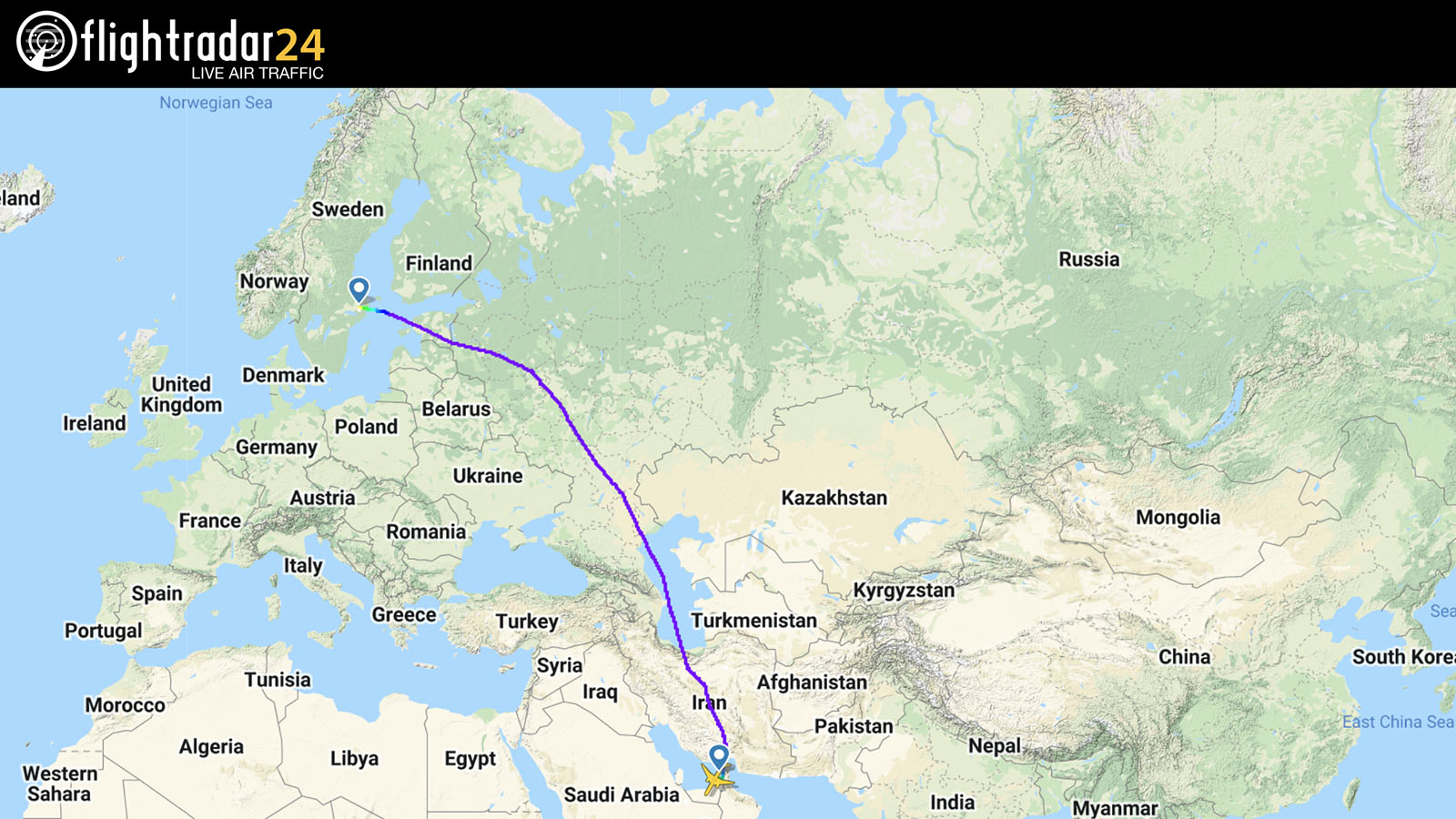 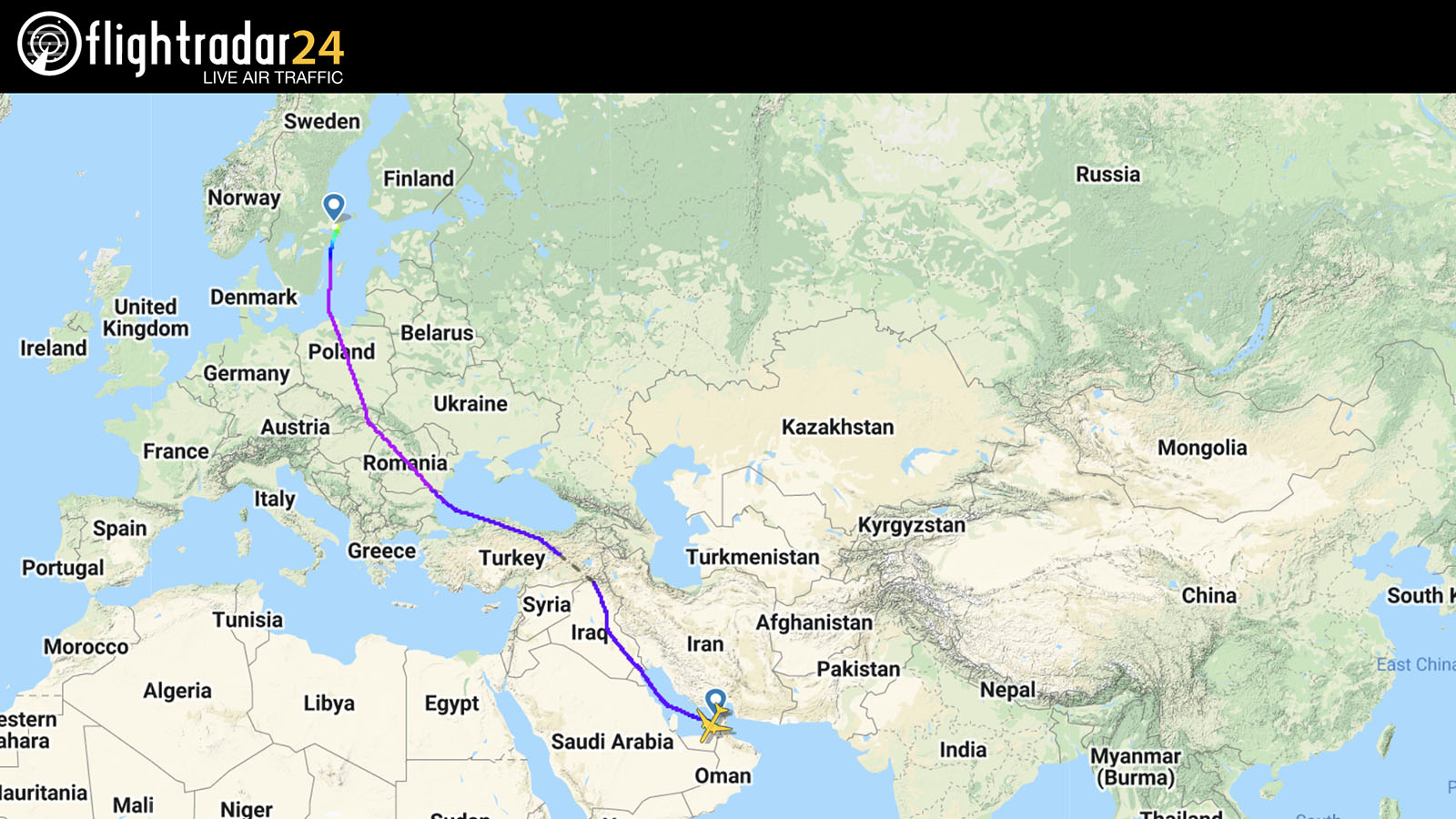 When avoiding Russia and Ukraine, Emirates instead makes a turn above Turkey. [Courtesy Flightradar24] For now, flights between Dubai and Chicago continue to overfly Russia. [Courtesy Flightradar24]

But a slight rejig isn’t as practical on Emirates’ Dubai-Chicago service. At the time of writing, these flights are still taking a polar route. That sees Emirates’ flights cross Iran and Kazakhstan, and continue through Russia. From there, it’s over Greenland and Canada, before reaching the United States.

Changing flight paths to avoid unfriendly airspace is nothing new for airlines. But avoiding a country as large as Russia comes with its challenges.

In many cases, this means significant disruptions to flight schedules, with airlines physically unable to run flights at the volume they could previously. With many flights also now taking longer than before – and burning more fuel – costs to airlines will only rise.

Given the price of oil is also climbing, the fares passengers pay will need to increase to cover the difference. The question is how fast airlines will pass those costs through to customers, at a time when international travel was only just taking off once again.