There is a great sale for the next week for flights to Santiago and Sao Paulo from Sydney, Melbourne, Brisbane and Adelaide in April-May next year.

You can combine both destinations for as little as $33 more (see example below).

Obviously, April-May is autumn in these Southern Hemisphere countries too. For comparison purposes, Sao Paulo is slightly warmer than Sydney at this time of year, and Santiago is slightly cooler than Melbourne.

Stops: The only direct flight is between Sydney and Santiago, so flying from other Australian cities will go through Sydney or Auckland, plus another stop in Santiago if continuing to Sao Paulo

Melbourne to Sao Paulo for $994 return:

Brisbane to Sao Paulo for $998 return:

Adelaide to Santiago for $1013 return:

Combine both destinations on an open-jaw ticket – Sydney to Santiago, then Sao Paulo to Sydney for $1045 return: 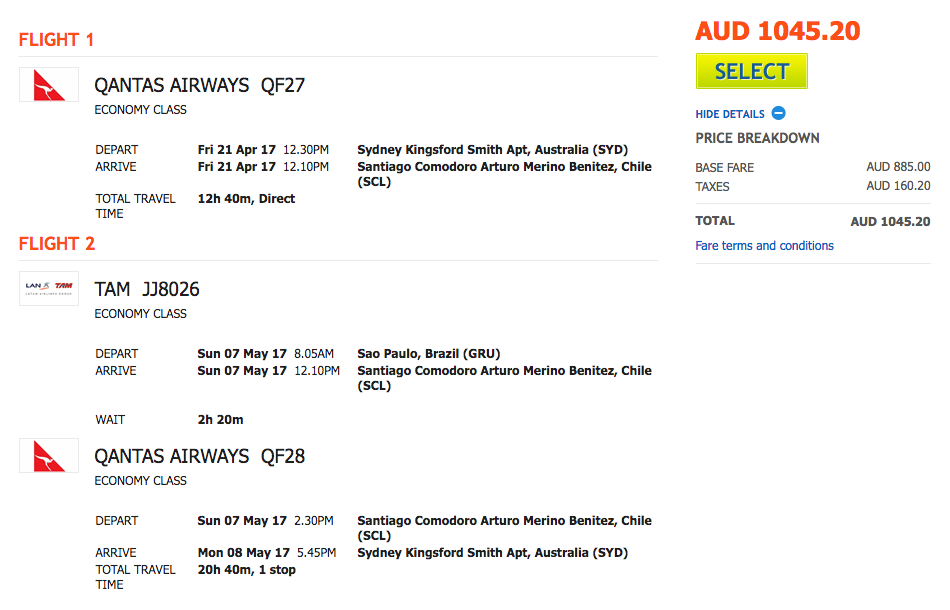 Booking link: Go to STA Travel to make a booking before 23 August. Prices are currently lower through STA Travel than Qantas.

Flight Deal: Chile/Brazil for under $1000 return on Qantas-LATAM was last modified: December 21st, 2017 by Matt Moffitt