Earlier this week I tweeted / facebooked this deal from Cathay Pacific for fares under the $1380 mark to London for departures from all CX ports in Australia. It’s to celebrate their 5th daily flight to London launching, and in theory is limited to the new flight numbers, CX238/CX239 on the HKG-LHR leg – and needs to be booked by end of 19th Feb. 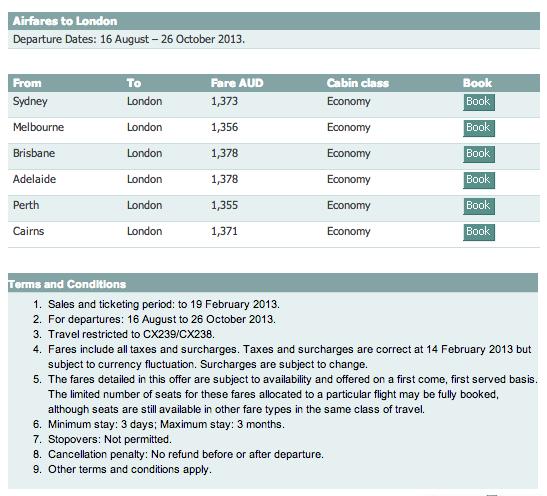 It’s definitely worth considering – hell, I rarely see fares to the UK for under $1700, let alone under $1400 – but this deal is actually way more accessible than I first thought.

The dates on the offer page say pretty specifically that it’s for travel from 16th August to 26th October.

However, I’ve found that cheaper fares are available for departures up to 31st October, and returning any time before the Christmas peak period – 4th December.

Also, the later dates have most flight options open at that price, not just the new flights that CX have launched. This books into Q class which doesn’t earn miles with Qantas, Cathay or American Airlines, but the price is too good to worry about that if you need to be in Europe around this time, and are looking for a great deal.
UPDATE: Q Class does earn Avios at 25% of flown miles. A SYD-HKG-LHR return would earn just over 5,000 Avios – enough for a one-way short sector with BA on a oneworld partner (such as Qantas).