This post is the next in the series outlining how to get the most from your credit card or frequent flyer program points – and a key part of squeezing points for the highest value is to use them strategically, not just because you can.

One key principle is that you shouldn’t treat points like money – points don’t have a fixed monetary value. There is usually a floor to their value, often somewhere around 0.5c to 1c per point. However, just because you can get that value out of a point, doesn’t mean you should redeem them at value. In this guide I run through an example of a poor redemption, and offer some guiding principles on when not to use your points.

You can achieve the 0.5c – 1c value I mentioned before by buying iPads, toasters, or by swapping them for gift cards (for example). When you redeem for physical goods (which is essentially the equivalent of converting your points into cash), the airline is having to purchase the physical reward on offer, and as such, usually assigns a fixed monetary value (and a low one) to their points.

On the other hand, flights which are made available for frequent flyer points redemptions are basically an internal cost to the airline, and as such have a more variable value – these may otherwise go unsold so the airline is willing to give you a better valuation for your points when you use them for flights.

The best value is always going to be realised by using your points for flights, and if you can earn and save enough, in Premium Economy, Business, or even First Class.

The only time it’s really worth cashing out points for physical goods at such a low value is if you have an orphan account in which you don’t think you can earn more points, and don’t have enough to redeem them for flights.

A second are where you might under-value your points is by using them for flights where the accompanying cost in taxes with the points ticket is relatively high – compared to the cash fare.

This why targeting Premium cabin redemptions pays off. Why use your points for flights nearer the front of the plane? Often because usually the taxes and fees that come with most points redemption tickets these days wipe out a good chunk of the value of using points for an Economy ticket.

Qantas are often especially bad at doing this, especially on ultra long-haul / multi-stop flights as they pass on a large chunk of the taxes that would be paid with a paid fare on points bookings too.

I’m going to show you this with an example of a return flight to London in Economy. 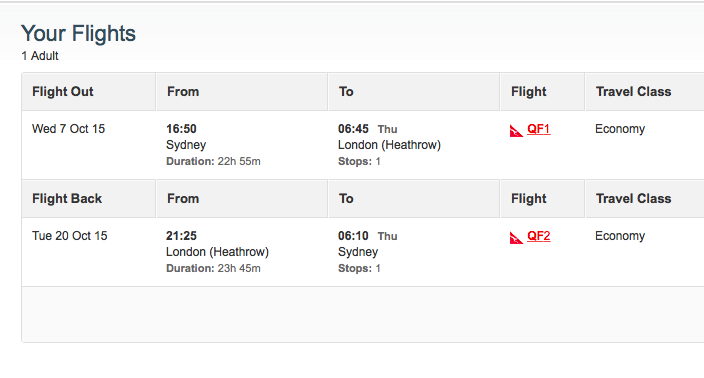 Picking a date where an Economy return points redemption is available yields a cash fare of $2278.

As a regular Bronze Qantas Frequent Flyer member, you would also earn 18,600 Qantas Points on this booking.

Redeeming points on exactly the same flights and dates yields the following price:

The points flights for these dates involved a connection in Melbourne, but that doesn’t impact the points paid (or materially the taxes). 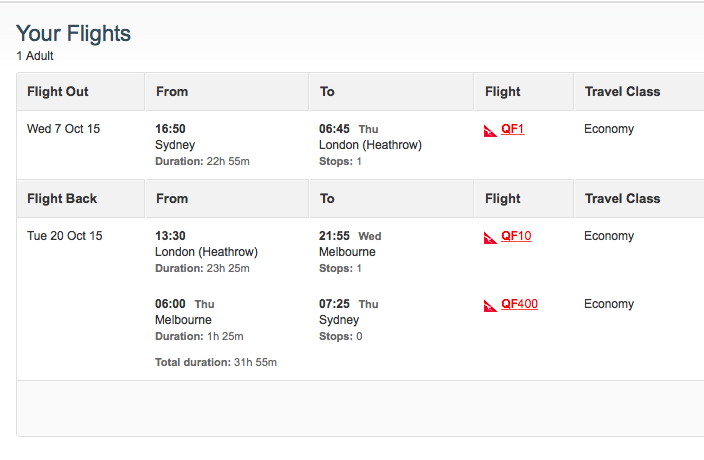 As you can see, the taxes on the points redemption are an amazing $918. On top of that, you’ve outlaid 128,000 points for your ticket, as well as missed out on 18,600 points for travelling on a points fare, rather than a paid fare.

All up, assuming you had to travel on these dates and you would make a booking regardless, using Qantas Points this flight has cost your Qantas Points balance 128,000+18,600 points = 146,600 points.

This is a great example of how using your points for Economy fares can yield really poor value. If the Economy fare were even cheaper – i.e. on sale, the maths would be even more in favour of just paying for the ticket instead of using points.

The points fare does come with one benefit – it’s a lot more flexible than the paid fare, costing only 5,000 points to cancel if you decide to change your plans.

This is why it’s useful to target programs that try to minimise the additional taxes and fees that come with a points ticket – this will end up yielding better value for the points you have earned.

By comparison, Business or First Class redemptions can often yield over 5c per point when you come to redeem – so 5x the value in this example.

Outside of premium cabin travel, what examples do work for redeeming your points?

Outside of long-haul travel in premium cabins, there are some pretty straightforward examples of when using points can make sense:

Summary – Knowing when not to use your frequent flyer points

The key takeaways from this guide are…

And finally, a bit of pragmatism – if you really have no use for flights using your points – and that’s fair enough.

You just won’t get as much value out them as you would otherwise, but getting some value from them is more important than not using them at all, so if you’re sure you won’t be flying with them, then cash out as you need.

The full set of back to basics guides to using your points effectively: