One of the main benefits of the American Express Qantas Ultimate card – apart from the 75,000 bonus Qantas Points on offer until 1st May 2017 – is a free Qantas return flight within Australia each year.

In this guide, we outline:

What is the benefit?

As an Amex Qantas Ultimate cardholder, you are eligible to claim a free Qantas domestic return flight in Economy Class between a range of Australian capital cities for each year you have the card.

Do note that no Qantas Points or Status Credits are awarded on the free flights, and they cannot be upgraded to Business Class with points you may have.

Also note that in order to access this benefit, you must make a first eligible card spend on “selected Qantas products and services”. What does that include? From Qantas:

Where can I go?

Travellers living in Sydney, Melbourne, Brisbane or Adelaide can fly between each other’s cities:

And those in our nation’s capital can use this benefit to avoid expensive cash fares on short flights to our two largest cities:

To look at it another way, here are the options in tabular form:

When can I use it?

You’ll get one free return flight each year that you hold the card. That year is not determined by the calendar year (e.g. 2017), but rather by your cardholder year, which commences on the date you open your account (e.g. December 2016 to November 2017).

As per the card’s PDS, you do have to make a Qantas purchase each year before this benefit is unlocked. Plus, you’ll get 2,500 bonus points for that first Qantas purchase anyway.

NOTE: The Qantas travel credit will officially ‘replace’ this benefit from 31 October 2017 but cardholders have until 30 April 2018 to use either one (but not both). 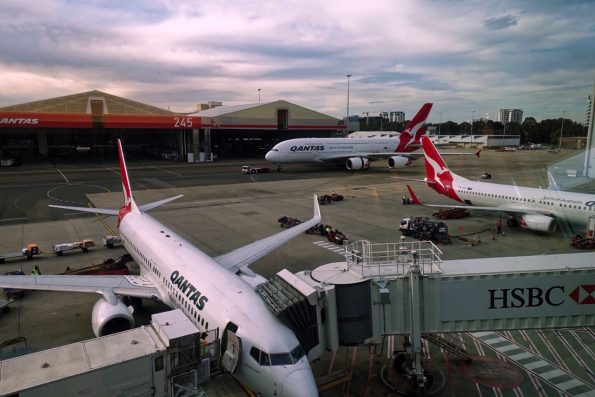 Who can get the free flight?

You can use this benefit to book a flight for yourself or anyone else (except an unaccompanied minor).

Being able to book the flight in someone else’s name gives you more options to make use of this benefit.

Why is this benefit (and card) a good deal?

A free return Qantas flight is just one of the benefits of this premium card, helping offset its $450 annual fee.

I looked at the price of a return Economy Class ticket on Qantas for a week in February 2017 departing and arriving back on a Tuesday between the city pairs permitted for booking using this benefit.

Now, everybody has different preferences in which city they would choose to use this benefit for, but from a purely numbers perspective, here are the city pairs in order from the most expensive (read: best-value) to the least:

So, hypothetically, if you lived in Melbourne and needed to do one return trip to each of the three cities on this list – Sydney, Brisbane and Adelaide – you would get the most value from using your free flight to go to Brisbane as it has the most expensive cash fares, followed by Sydney, and Adelaide as the cheapest destination.

Availability when using the complimentary flight can be limited though, so don’t rely on it being usable for your one key trip every year – it’s best considered as an added extra for those who have to book a few domestic flights each year and can plan ahead to use the free return flight in advance.

A second way you can maximise your benefit is if a friend or family member is looking to book a return domestic flight with Qantas with cash anyway, you could use your free flight benefit to book it for them and then get them to pay you the cash.

Finally, you may need to travel last-minute to one of these cities in the next year, so you could hold onto your free flight benefit rather than having to fork out money for an expensive cash fare. Just note that there is no guarantee you will be able to find last-minute availability for this benefit, so there is an inherent risk there.

How do I book my free flight?

You need to book this flight through American Express, not through the Qantas website or by calling Qantas.

In terms of changes, once the flight has been booked, you cannot change the route, however, date and time changes are permitted for a $38.50 fee + fare difference between the value of the original flight and the new flight.

The Qantas free flight benefit that comes with the American Express Qantas Ultimate card helps offset its annual fee, in addition to the 100,000 bonus sign-up points offered until 2nd October.

The best-value uses of this benefit come from using it on routes which are relatively more expensive.

Remember, the Qantas travel credit will officially ‘replace’ this benefit from 31 October 2017.

Read the Point Hacks guide about the Amex Qantas Ultimate

Find out more
How to get the most value out of the Amex Qantas Ultimate annual free flight was last modified: June 1st, 2020 by Matt Moffitt