A guide to the SkyTeam Alliance in Australia

This guide takes a look at the SkyTeam alliance, focusing on its carriers that fly into Australia and their respective frequent flyer programs.

The SkyTeam alliance is one of three major global airline alliances, alongside oneworld, which counts Australia’s largest airline Qantas as one of its members, and Star Alliance, which is indirectly linked to Virgin Australia’s Velocity program through its reciprocal points transfer partnership with Singapore Airlines’ KrisFlyer.

The alliance currently includes 19 member airlines, 7 of which fly into Australia and are highlighted in bold:

Note that on 1 January 2019, China Southern Airlines left the SkyTeam alliance. It is rumoured that LATAM may join SkyTeam after it leaves oneworld.

SkyTeam Frequent flyers are able to earn miles and status credits when flying with different SkyTeam airlines in the same reservation. The alliance spans across 1,074 destinations in 177 countries (*Note, this includes China Southern airlines, with SkyTeam having not yet updated these figures), so there is plenty of opportunity to earn and redeem miles as well as earning status credits with a SkyTeam alliance program.

With SkyTeam Priority, eligible frequent flyers are able to access the following benefits when traveling with any SkyTeam alliance airline in any travel class. These include:

To enjoy the benefits of a SkyTeam Alliance frequent flyer program, you will need to join a member airline’s individual program. While there is no universal SkyTeam Alliance frequent flyer program, the Alliance does provide universally-dedicated SkyTeam lounges in addition to individual member airline lounges. There currently are seven SkyTeam lounges, including a lounge at Sydney International Airport. Other locations are Beijing, Dubai, Hong Kong, Istanbul, London Heathrow and Vancouver.

If you find yourself flying on a SkyTeam flight in a premium class, such as on Korean Air in First between Sydney and San Francisco via Seoul, you will find yourself welcomed into the SkyTeam lounge in Sydney, which is predominantly the main SkyTeam lounge available for Australian based frequent flyers.

A full review of the lounge can be found here.

How to earn SkyTeam miles?

SkyTeam miles can be earned directly with any SkyTeam airlines through flying or their respective air and ground partners. None of the 8 SkyTeam member airlines that fly to Australia offer a direct-earn credit card in the Australian market, which does limit the ability of Australian based members to earn substantial miles from everyday spend.

Read our intro guide to the Marriott Bonvoy program

Which are the best SkyTeam frequent flyer programs for Australian based travellers?

While the number of SkyTeam airlines flying into Australia is somewhat less prevalent than those of oneworld and Star Alliance, you may still find them to be of great value to you, especially if you travel overseas frequently from Australia to destinations covered by the SkyTeam network.

The table below compares the number of points required to redeem an award ticket on SkyTeam carriers flying into Australia with the exception of Garuda, which does not publicly detail its award chart as well as China Eastern and Vietnam Airlines as they are both priced too high. Qantas redemptions are also shown, as many Australians are members of this program and will likely want to compare the attractiveness of any SkyTeam program to it.

Those programs that are able to earn points through Marriott Bonvoy and/or American Express Rewards are marked underneath their frequent flyer name.

The best redemption for each destination above is highlighted in red.

For those who regularly travel to China, Xiamen based carrier Xiamen Air represents great value on the redemption front with an almost clean sweep of the table above, however with no partnership with either Marriott Bonvoy or American Express Rewards, the ability to earn miles from Australia is limited to flying.

Depending on where your travels generally take you, Delta SkyMiles or Korean SkyPass may well be your pick, given the ability to earn mileage through credit card spend. Delta Air Lines is competitive on flights to Europe, while Korean SkyPass has a great Round the World offering at just 220,000 points, which is significantly cheaper than both Qantas at 280,000 Qantas points and Singapore Airlines at 240,000 Krisflyer miles.

Korean SkyPass is also competitive for trans-tasman flights. If your travels are mostly to Shanghai, China Eastern may also be a program to consider.

A downfall of SkyTeam in Australia is the very limited non-airline partnerships between its member airlines and Australian companies, and for this reason, many of you may turn to Qantas or Velocity, or other Oneworld and Star alliance airlines. Both frequent flyer programs of Qantas and Virgin Australia are competitive, especially the former on routes to Asia. Point Hacks has provided guides for these programs, which can be accessed here.

Please note however the recent changes to the Asia Miles program on 22 June 2018.

How to search for SkyTeam availability

You can search any of the alliance’s airlines websites to find award availability.  Public commentary suggests that the Flying Blue website is the best site to use for SkyTeam award availability, however you need to become a member of the program in order to access this functionality.

You can also use third party tools to search for award availability.

As I am a member of Delta Skymiles, I have provided an example below of using its award search functionality to find award flights between NYC (All airports) and Paris CDG for 11 October 2019 in the Delta One cabin on Delta and Partner Airlines.

A number of options popped up

What became clear however is that only flights were showing up, with no Air France flights appearing, which would be expected.

I also did the same search for the Main Cabin to see if it wasn’t a lack of Business seats that may have been the issue, but this did not appear to be the case.

Whether joining a SkyTeam frequent flyer program will be of benefit to you is determined primarily by your personal travel patterns. Joining one of these programs is best suited to those who travel internationally often from/to primary and secondary hubs of SkyTeam Alliance carriers. This is due to the limited opportunities to earn miles in these programs outside of actually flying.

If you do fall within this category, there are a number of SkyTeam carriers that fly into Australia, however some of these fly solely to Sydney or Melbourne, which will require domestic connections for those living outside these cities.

Should your flying be mostly of a domestic nature, or to destinations outside of SkyTeam hubs, then Qantas, Velocity or rival Alliance programs may be a better choice.

Others alliances relevant to travelers based in Australia

Read our guide to oneworld alliance in Australia 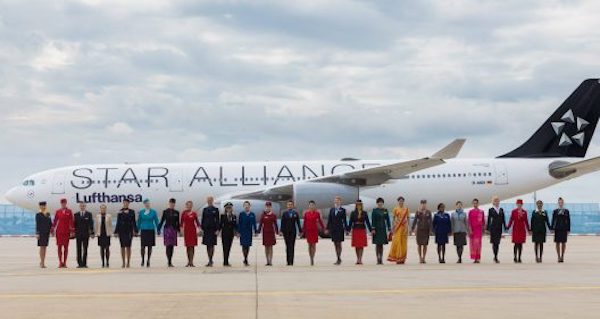 Read our guide to Star Alliance in Australia

A guide to the SkyTeam Alliance in Australia was last modified: February 3rd, 2020 by Daniel Sciberras

Royal Air Maroc, Alaska Airlines in, LATAM out for the oneworld alliance

A guide to the Star Alliance in Australia